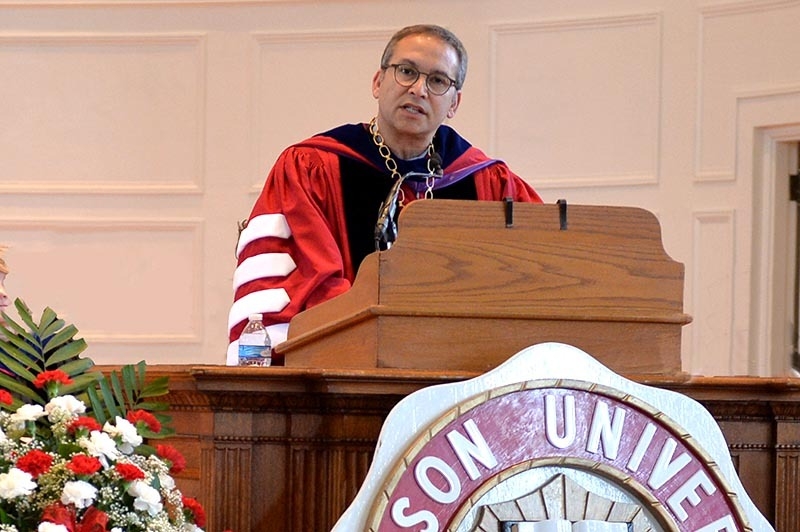 James, your commitment to the campus community has extended from helping us envision residential community wellness, connection, and community to the neuromechanical analysis of the Denison baseball team’s pitching mechanics. Your passion and accomplishment as a biomechanics researcher have not gone unnoticed, having been featured twice during Big Red Weekend and recently recognized in Denison Magazine. Your attention to detail while setting your understanding of those details in the larger human condition has helped our campus work better for everyone and has made contributions which will improve the vitality of our campus community for years to come. As an outstanding scholar-athlete on the men’s swim and dive team, your maturity and team-first approach has been described as an impetus for advancing team culture on our campus in the most positive ways. Your peers agree that you are a role model for wellness and healthy social climate on campus. A leader in the swimming community, captain, NCAC champion, All-American, and someone who is known to lead-by-example all across campus, it honors us all to recognize what you have accomplished.

Your nominators, Caroline, note that you plan to pursue a career in public health, but your nomination shows us you have an eye on global health as well – a gift we all know is greatly needed in today’s world. As an international studies major who has also completed a pre-med curriculum with exemplary academic performance, you’ve pursued your passion from Argentina to Bellevue Hospital in New York. Fellow students note your skillful tutoring in chemistry here on campus, and in the local community you’ve been a volunteer and asset for the Licking County Humane Society and Habitat for Humanity. A remarkable DCA leader, you shepherded the campus chapter of Habitat and doubled Denison’s hands-on participation in home building and service, including making connections to other Habitat programs in need of our help in South Carolina. You helped spearhead an effort to bring together Denison students who supported Planned Parenthood, serving ultimately as president of Denisonians for Planned Parenthood. Your global spirit and local engagement are at the heart of our campus vision of a liberal arts education.

As team captain we could start on the football field. But Ben, in the classroom we are told by one of your faculty nominators in the Politics, Philosophy, and Economics program that while many students can excel in class discussions because they talk a great deal, the real strength of your contribution in class is a gift for depth. You not only offer reflective responses to content questions, you ask questions about significance, tensions, or potential contradictions in an author’s work. This is probably why you are a Phi Beta Kappa inductee, why you received the Harold Titus Award for Outstanding Work in Political Philosophy, why your teachers describe you as an exceptionally memorable student, and why you have received the very prestigious NCAA post-graduate Scholarship. But it’s a different sort of depth that allows you to lead in many roles outside the classroom as well. On the athletic field, your accomplishments are many and your efforts helped lead to Denison football’s first ever back-to-back championship seasons. It’s no surprise that head coach Jack Hatem states that you have been, in his experience, one of the finest of all student-athletes in his 35 years of teaching and leading in the liberal arts.

Lariona, you have exhibited sustained leadership that has changed Denison for the better. In your Anthropology/Sociology and Communication majors, your faculty members have watched you come into your own intellectually over your four years at Denison. With your quiet leadership, you are a role model inside and outside the classroom. As the Chief Minister of the Black Student Union and the past president of Alpha Kappa Alpha Sorority, you have been a visible leader and advocate for the African American community at Denison, but in your passion for creating inclusive communities, you have used your leadership platform to engage more broadly with the community as a whole. In your genuine desire to leave Denison better than you found it, your impact on campus has also been evident in your role as a DU Lead Club Advisor, a DCGA Senator, and Senior Class Co-Governor. Perhaps one faculty member says it best: “Lari is highly representative of what we hope for in Denisonians. She brings a breadth and depth of leadership and involvement and is meaningfully connected to diverse communities that include identity and membership-based organizations and administrative units.” Lariona, we thank you for your welcoming spirit and your drive to create a more inclusive Denison community.

Katherine, our athletic director says that you are poised to leave Denison as the most decorated swimmer in program history. Your coach affirms that you are Denison Women’s Swimming. As a four-year member of the team and now team captain, you have been the foundation upon which our women’s team has grown. When challenges within the team arose, you made a conscious choice to become part of the solution and to help your team experience positive change through transformational leadership. You may be Denison’s greatest female swimmer ever, but your mentors argue that you are rightly considered one of the best in Division III history. With 50 and 100 meter breaststroke times that are the fastest ever recorded in D3, and times in the 200 breaststroke and 200 Individual Medley ranking second all-time, it’s no surprise you currently hold NCAA records in two events (100 breaststroke and 200 medley relay) and most recently qualified to compete for a spot on the United States Olympic Team. And you’ve done all this while achieving the rank of College Swimming & Diving Scholar All-American, providing academic leadership in our Health, Exercise, and Sports Studies program. These are all impressive achievements, but the work of leadership you’ve engaged in on our campus may be even more impressive.

Alina, your faculty say you have the ability to be intellectually engaged and to engage the community at the same time, that you consistently connect what’s happening in the classroom with what’s happening in the world, and that you are a student exemplar in the burgeoning Narrative Journalism concentration. In your involvements on campus, you rarely limit yourself to only the organizations and causes to which you are inherently tied. Whether by contributing to Synapse or facilitating DU Lead and June-O sessions, your willingness to traverse the unfamiliar with empathy and intention provides not only a model but a framework to other students looking to do the same. Holding the position of Vice President of La Fuerza Latina with humility and respect as a biracial woman allowed you to foster cross-cultural connections. In your work as the news editor for the Denisonian, you led an effort to vitalize that publication into an important arena for campus dialogue and understanding. Your work as an aspiring journalist has highlighted underrepresented communities across campus in catalytic ways. One of your greatest contributions to Denison has been your leadership in creating a thriving Denison First-Generation student network. Your dedication to the betterment of Denison’s campus culture is diverse, far reaching, consistent and authentically driven in every case.

Jaden, for your senior project, you sought a challenge - composing a large-scale work for wind ensemble — far beyond the scope of most senior projects. The final project, a piece entitled Weight, is a work that your nominators call “one of the most mature works we’ve seen from a student composer at the undergraduate level.” Jaden, you also collaborated with the Theatre Department to create thirty short musical pieces to accompany scenes and scene changes, along with regular contributions to the Tutti Festival and composing the score for Denison’s recent production of “Sense and Sensibility.” The Doobie has described your music as creating “sound loops that layer in rich reverb and dense chordage by tapping into deep magicks of old to take you to a lo-fi 8-bit dreamworld full of chill beats to study and relax,” which is high praise indeed. As an artist, you’ve been willing to explore identity and authenticity in your music. In your academic work, faculty speak of your “pure intellectual firepower and intellectual curiosity,” and you’ve found ways to draw on your own experience to make art that has been provocative and profound. As a Phi Beta Kappa scholar, an artist, and a campus leader, you have made Denison a better place.

Gavin, as an Economics and Data Analytics double major, you set for yourself impressive academic challenges and met them with excellence. With Denison Ice Hockey, you led the team both on and off the ice from your very first year, immediately taking leadership roles as Treasurer, Vice-President, and ultimately President of the Hockey team. It’s clear you have also been regarded by faculty as a leader in the classroom. Selected as a sophomore scholar to help a professor in Computer Science design a new course over the summer, that effort resulted in a co-authored publication at a prestigious computer science conference. You have been both an Economics Department and a Data Analytics Fellow, “setting the bar for excellence,” as one of your nominators said of your academic efforts. One mark of a liberal arts education is how excellence is a common outcome of interdisciplinary work, and how developing skills in multiple areas brings out the best in the whole person, whether it’s technical communication, shutting the door on an opponent in the net, winning a league championship, or renewing the Economics Club as a campus presence. You have done all of these with aplomb, and we honor you for the many forms your leadership has taken.

“Fearless enthusiasm” are two wonderful words to have said about you, Sarah. Your nominators, and they were many, spoke of how your gifts in writing, acting, speaking, directing, and teaching have consistently been deployed in ways that open up possibilities for other students. One faculty member said, “I have never met another student who so consistently climbed the ladder and then diligently sent the ladder back down after working to make the rungs more accessible.” You’ve been called creative, energetic, and original, but it’s those two words, “fearless enthusiasm,” that we keep coming back to. Your gift for improv certainly helps to open up what that phrase means, and you’ve been president of Burpee’s Seedy since 2016. Your theatre credits at Denison are too numerous to mention but include Hermia in A Midsummer Night’s Dream, as Margaret and the Dance Captain in Sense and Sensibility, and as the Bride and Dance Captain in Denison’s mainstage production of Big Love. You have directed on the Denison mainstage as a student and are twice the first-prize winner in fiction in the All Denison Writing Competition. We look forward to reading and seeing more from as you fearlessly embark on your future.