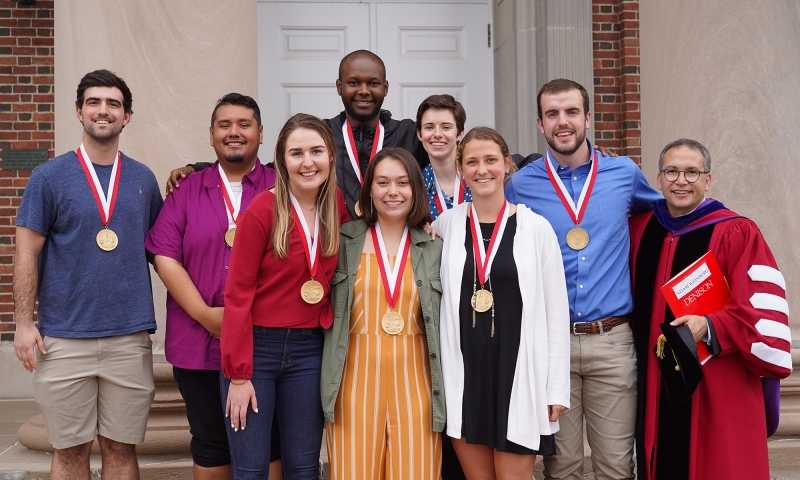 Maggie, your nominators have said you are a “highly committed member of the university community who takes the duties of citizenship quite seriously.”

From your work in communications and theatre, your teachers are unanimous in not only the quality of your written work, but in your classroom interactions and the way you bring people together as exemplary of what we’re about here at Denison. Along with your fierceness of intellect and wit in expression, all of which has to come in handy as editor of the Bullsheet, and a member of Burpee’s Seedy Theatrical Company, your visual sense has caught the attention and admiration of many.

One faculty member noted that in addition to your critical thinking and exemplary writing skills, you think visually in surprising and very effective ways, in posters and flyers you have designed for events — a routine task, which gets transformed in your hands into inspired artistic endeavors. This has led them to ask as a professor: “how many of our students—how many of US—can operate at that high a level across thinking, writing, and artistic creation?” What we know is that you can, and have, and do, and will.

Craig, we have been told that you knew you wanted to be both an environmental studies and education major from your first day on campus. Your experience as an intern with the Student Conservation Association in high school influenced this decision. And then — as many good liberal arts students do — you took an art history course to fulfill a general education requirement, which ultimately motivated you to pursue a minor in art history.

What has made you stand out, though, is not only your exceptional and creative leadership on campus and in the community, but your ability in whatever subject to raise the entire class’s level of critical thinking and personal engagement: not just your own acuity, which is considerable, but the intensity and interest of everyone around you.

Your passion for justice fuels your desire to include everyone at work in your environment. In fact, one of your professors noted that, after an opening session where the basics of syllabus and expectations were laid out, and the question was asked if there was anything else the students needed to know, you asked the teacher, ‘What most excites you about teaching this course?’ It’s that kind of engagement across every sort of box and barrier and difference that brings you to this honor here today.

As a student-athlete at Denison, you have brought both to the lacrosse field and the classroom a set of skills for leadership that have drawn the attention of teachers and coaches alike. Your teammates and coaches unanimously voted you as a captain for your senior season. They did so, saying that you have been the consummate voice of encouragement, reason and discipline; bringing an unmatched level of maturity, well-timed levity, positivity, intensity and accountability to our team every day.

Coursework doesn’t have team captains, but in group work in your global commerce major, you have been recognized as a natural leader, for senior projects or among the global commerce fellows. And even in one-on-one interactions with local students in tutoring or on an athletic field as a mentor, you put the same care and attention into your relationship with a small child that you do a visiting executive from Nike on campus. Or as one nominator put it: “If you were to write down the ideal characteristics of any teammate, group member or student, you would be describing Jane.”

Carson, we all know that when you’re a chemistry and biochemistry senior fellow, you’re probably pretty smart, and you even have the GPA to go with it. What catches people’s attention, though, is that as a researcher you are thoughtful and insightful in the questions you ask of others in working groups during research discussions. You set a tone by simultaneously being supportive and light-hearted, even while holding yourself and your peers to high scientific standards.

One nominator observed, “It’s my experience that a scientist most often shows their true colors when faced with experiments that aren’t working as expected. Carson has faced his share of experimental set-backs, and in those situations has shown himself to be careful in reflection, eagle-eyed in spotting places where his technique or setup might have been flawed, meticulous in lab documentation, and creative in brainstorming about alternative approaches.” In other words, you fail well, and that’s an important life skill.

For the Denison community, you also took a struggling Habitat for Humanity chapter and helped to turn it around to success, an outcome that has already helped many families put themselves back into secure housing, and efforts which will help many more students do the same service in future years. One of your nominators summed it up well: “[Carson] will live a life that benefits others, he will stretch his mind and his abilities daily, and he will make Denison very, very proud.”

Tommy, we know you as an excellent student of history who earned early admission into medical school, a student athlete, a member of the Burpee’s improv group, a DCGA representative, and a hard-working volunteer in the local community. And one of your nominators told us as well that you are “still an unapologetic lover of all things Disney in spite of my attempt to educate it out of him.”

What brought you to the attention of the President’s Medalist process is how others have said you have the uncanny ability to know “when to lead from below, beside or above.” You are respected as a master mentor, someone who brings a global vision and worldwide view to meetings and initiatives in group settings. Another nominator observed more generally that “Leading one’s peers is the most difficult challenge in one’s undergraduate years.”

You have mastered that challenge, and more: prior to serving as team captain, you received the “Hardest Working Underclassman” award on a team ranked third in the nation, and were a member of the team that advanced to the Final Four of the national tournaments.

Tommy, we know you won’t have to wish upon a star to make your dreams come true. You’ve made many of them a reality here at Denison.

Elena, in environmental studies and political science you have continually impressed both teachers and fellow students with your maturity, your persistence, and sophistication of argument. You are looking at law school next, and some are already looking at you and seeing Ruth Bader Ginsburg, which is quite a judicial collar to fill – but the drive and intellect is there to make that comparison valid.

We are told how you are driven not only by your individual will to excel but also by a passion for the pursuit of justice for all. In your numerous types of service on campus, you work hard to bring your peers along on your intellectual journeys. You are a consistent voice of integrity on campus who demands that we attend to justice. Nowhere has that been clearer than in your work in the realm of Sexual Respect.

As a campus leader on Sexual Harassment and Assault Education, coordinating and promoting the annual Take Back the Night vigil, Sexual Assault Awareness month, and first-year orientation bystander intervention training, you have worked to set a new tone for campus social interaction. In service of that goal, you established a Sexual Respect 101 curriculum for all first-year students to complete. As one of your mentors said to us: “Denison is a better place for her presence.”

Rachel, you have been a truly outstanding student, researcher, student athlete, and campus leader during your time at Denison. Your faculty believe you will be successful in medical school and beyond, a true asset to whichever program, and community, that you choose to join.

And in your college career you also have been a highly active and engaged member of the campus community, as a proactive and highly respected resident assistant, a top teaching assistant in the biology department, chief education officer of Kappa Alpha Theta, and this past year a peer advisor to underclass students. You have been on the varsity soccer team two years previously, all while maintaining a perfect 4.0 GPA.

What really impressed one of your professors was how an “almost whimsical conversation” about a student-led research publication at Denison led you to revive The Synapse magazine at Denison, serving as the president and managing editor. And all of this while also volunteering regularly at a community health clinic in Newark, Ohio, and regularly contributing to service and singing at your church. Most recently, you helped prepare the successful bid to host a Camp Kesem at Denison for children with parents diagnosed with cancer. From epigenetics to community engagement, you have been a thought leader and shining example at our fair college on this hill, and are part of why it is a home we love so well.

Armando, in your work for a Bachelor of Fine Arts in the Studio Art Program, you have shown yourself to be a responsible, committed, compassionate, and honest person to work with. Your teachers all agree that you take the responsibility of being an artist very seriously. Your nominators speak of you as a student, a friend, an artist, and simply “as a human being,” a person who sees the humanity of the liberal arts as a pre-eminent value, which is at the heart of the education we are pursuing at our college.

You have helped fellow students through your work at the Writing Center and in studio art as a teaching assistant. You also are currently the president of La Fuerza Latina, and in that role have had an important and influential presence on campus, including organizing the Summit of Ohio Latinx taking place here at Denison this very weekend.

One of your nominators said this about you: “He is humble in his approach, but has very powerful things to say.” That sounds like an artist, a humanist, and the ideal of a Denisonian. We are proud to call you our own, and know your continued artistic work will continue to have powerful things to say to all of humanity.