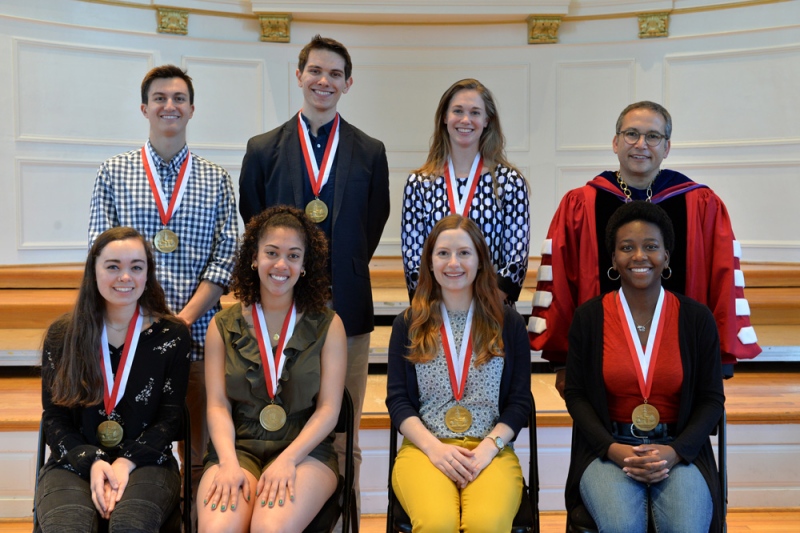 ‘Ben, your nominators have said you are “unusually motivated, dedicated, and hard working.” In classroom discussions and written presentations, your command of historical materials is impressive and your analytical skills are at the highest level some of your professors have seen in their entire careers. As a member of Denison’s Swim Team you’ve not only been a Denison Top 50 Athlete the past three years, you have five individual All-American and three Scholastic All-American certificates. Outside of the pool, you have served Denison as the August Orientation Student Staff Coordinator, after first serving as an August Orientation group leader. In this role, when things didn’t go as planned, when technology didn’t work, when room schedules got scrambled, students got into the wrong groups or were homesick or whatever was happening out of the ordinary, you could be counted on to solve problems, lead groups through challenges, and assist other group leaders. That’s not surprising from an Eagle Scout, a Dean’s List student your whole time at Denison, and a Ted Barclay Top 5 Scholar Athlete in 2016, 2017 and 2018. We are proud to call you one of our own, and you leave the campus better for your having been here with us.’

‘Daija, your strong grades prove that an investment in academics is where you begin, but your commitment to intellectual engagement extends far beyond the classroom. As an Anthropology/Sociology Fellow you have served and led with intellectual and research acuity. You’ve been President of Denison’s Chapter of Mortar Board Honor Society, a member of Alpha Kappa Delta, Lambda Alpha the International Sociology Honor Society, and the National Collegiate Honor Society for Anthropology. As an academic leader among your peers you have actively encouraged them in connecting to resources and building relationships with faculty. At our campus’s Center for Cross-Cultural Engagement, you have served as a Student Administrative Assistant since your first year, and your work there has helped create transformational change that that has been both inclusive and authentic. Your work in the Center has been as simple as being a familiar, approachable face and as complex as helping student groups find their voice by brainstorming ways to implement systematic change. Additionally, you have served as an Ambassador & Co-Coordinator on the Paving the Way Pre-Orientation staff, facilitating sessions that addressed academic success, ethnic and cultural identities, personal development, and an exploration of campus resources. As a masterful writer, you have focused on socio-economic intersections of how society works, even as you work face-to-face in helping create a better and safer environment for women of color on campus, through the work of the group “Sisters in Dialogue.” We want you to know that the dialogue will continue after you leave us and move on into a life which we know will continue to bring people together, as you have so wonderfully done here.’

‘Jenn, one of your nominators said about your earliest days as a Posse Scholar that you “emerged as the mother of them all. [You made sure everyone [was] accounted for … [and] pulling their fair share of the group’s weight.” Not long after, we’re told, you were “pushing each scholar to “play harder, go higher, take a breath and get back in the game.” As an Anthropology/Sociology and Ed Studies major, you’ve been deeply engaged in curricular service learning, inviting and encouraging your peers to participate as well. With La Fuerza Latina, serving as PR & Outreach Coordinator for the FLIP board; La Fuerza Community Senator in DCGA; a member of the Black Student Union, and on “Paving the Way” staff, you have worked tirelessly to promote inclusion, awareness, and justice for all Denison students. With those same ends in mind, you worked in Newark at Wilson Middle School on an Awareness Campaign for the Humane Society, tutored students at the ProTeen Center as well as at Pataskala Elementary with Project More, and even went on to be a Servant Leader Intern for Children’s Defense Fund Freedom School in Newark. Because of your keen interest in teaching, you’ve challenged yourself to participate consistently as a gym instructor and dance teacher from the children at Welsh Hills School to the senior citizens of the Kendal Retirement Community. We hate to let you go, Jenn, but we know there are many others out in our world who need someone to show up and mother them and motivate them and lead them, and Denison is proud to send you forth to do just that.’

‘Emily, one of your professors asked a good question in your nomination for the President’s Medal: How many students are leaders both down-hill and up-hill? As a senior dance and computer science double major you present a unique and impressive profile as a student who has made the most of a liberal arts campus and the interdisciplinary assumptions that we try to embody at Denison. You exhibit the characteristics of our finest students, showing leadership, intellectual acumen, artistic promise and contribution to the global and local communities at Denison. Since your arrival on campus, you have been a visible and valuable member of the dance department. Your work there has been consistently of a high level, your dedication to dance without exception. You’re smart, quick to apply what you’ve learned and deftly able at utilizing newly acquired skills to grow both artistically and intellectually. Twice you’ve been elected to serve as the Dance Department Fellow, and hold the prestigious Osborne Scholarship, annually awarded to the top fine arts majors in the division as well as being a Dean’s list honoree for all but one semester since your arrival on campus. You have likewise been a Fellow in the Math and Computer Science Department. In a Computer Systems class, you worked with a partner building a hardware system using sensors, actuators, and controllers. Yours was an autonomous robot that danced. What struck your teachers was how thoughtful and nuanced the dancing robot was: starting out in a “shy” mode, and as time went on, becoming more confident with its moves and sounds becoming more energetic. As your nominators have told us, you are a student who doesn’t just say she wants to combine her passions, you have literally made it happen. We look forward to hearing about how you combine your passions and interests into new endeavors as you enter your professional career, probably in a field that doesn’t even exist yet!’

‘Haley, one of your Biology professors says of you: “I seldom have had a student with as much drive and natural talent as Haley. In class, she is so excited about learning that she practically bounces out of her seat, which makes class fun for everyone, including me.” Beyond your achievements and leadership in the classroom, you have excelled as a researcher for the past three years, most recently as the Arend-McBride Summer Scholar in the Biology department.

You have served as a leader in your time at Denison in both traditional and unexpected roles. As President of the Denison Community Association, you organized and led weekly meetings with cabinet officers and staff. That’s a fairly standard, if creditable form of leadership, but it has been your unique approach to fulfilling the responsibilities of such roles that have made you stand out for staff and faculty. You have been aggressively proactive in your approach to identifying areas which could be improved and spearheading significant change for the better. Perhaps the best example is how you were instrumental in connecting DCA with the Civic Action Circles. In your first year at Denison, you joined Denison Service Orientation (DSO), spending five days in our nation’s capital performing community service, then as a student leader for this trip in 2016, and as student coordinator in 2017. Your exceptional decision-making ability and judgment were called upon frequently during these events, making you an invaluable leader for this program.

Haley, your nominators have called you a person of great personal integrity, committed to public service. In addition to your work with DCA, you are highly active in Kappa Alpha Theta, a Peer Mentor, a DU Lead Club Advisor, an Admissions Senior Interviewer, and President of the Denison Biological Society. We honor you by adding in closing this simple quote from your nominators: “She is an exceptional leader and true asset to the University.” ‘

‘Oliver, it’s not often we can say we are honoring someone who has compellingly argued, in your class on introduction to political theory, that the key to happiness for individuals is having low expectations. One of your nominators observed about your Hobbesian insight about low expectations and happiness that: “It was an original, if somewhat grim, argument that brimmed with creativity and insight.” A political science major, you have been called academically gifted and innately curious, with your energetic and insightful work earning the label “superb,” culminating in an original research project on the connection between shifts in constituency composition and member behavior in Congress, one that set the bar not just for that semester but for later iterations of the course. Equally impressive to your professors, though, was your willingness to help other students with developing, improving, and methodologically executing their ideas in ways that enhanced their work and development.

Faculty have also noted, Oliver, your service through Greek life – not just as a Beta yourself, but as IFC president this year. To quote one of your nominators: “as IFC president he has pursued several initiatives that attempt to connect fraternities with other campus organizations and initiatives.” One impressive example of your leadership in this role was your success in recruiting members of each fraternity to attend the Denison Coalition for Sexual Respect on a weekly basis.

You have also been a leader in Residence Life, as DCGA Speaker, on June-O staff and for the 127 blog, which regularly receives thousands of virtual visitors from dozens of countries, reading entries like:

Oliver, you will be missed, but we suspect we will be able to keep up with where life takes you online, and we will be logging in with great interest.’

‘Kelsey, your nominators unanimously sing your praises. Selected a Fellow in Educational Studies in both your Junior and Senior years, your professors laud your classroom performance, where you have served as a model of academic excellence. In fact, your e-portfolio was so well done that your faculty asked to share it with future Education students as a model for how to approach the assignment. You have shown leadership in your Education major as president of Kappa Delta Pi education honor society, motivating your fellow students to make the organization more visible on campus and in the community. And in your Psychology major, you have worked as a research assistant in an experimental lab this year.

There is so much more you have done not just on, but from and on behalf of our campus. You were a tutor with Project MORE, a Title I reading program at a local elementary school that serves at risk second and third graders. You founded, as a sophomore, the campus organization Denison Advocates for Sexual Health, which developed sexual education programs and initiatives, including Denison Sex Week, involving over 700 participants and multiple campus organizations.

For the Admissions Office, you have been a Senior Interviewer and interviewed and trained over 300 student host ambassadors and interns. In addition to all that, you served as an August Orientation team leader and as a leadership fellow for CLIC, including serving as the on-site coordinator for the LeaderShape Institute. In years to come, you may manage even larger projects, but it will be hard for you to make a bigger mark than you have on this campus.’