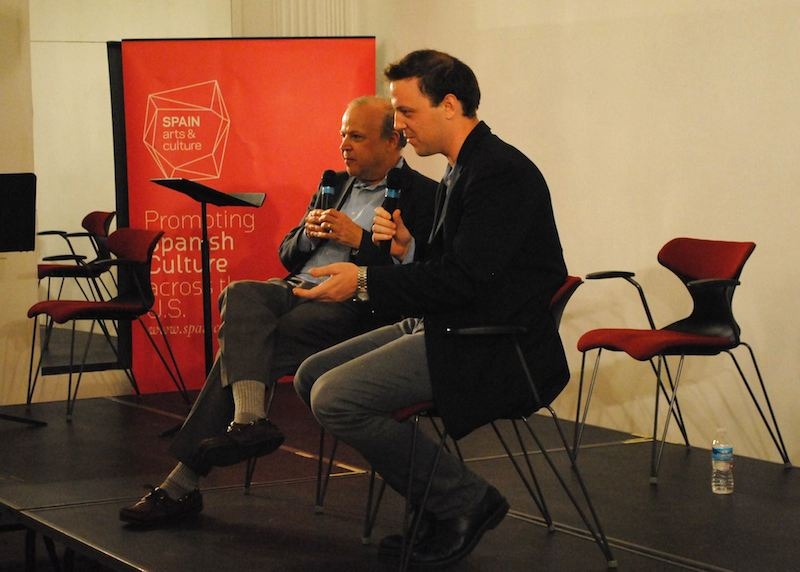 Lichtenberg with fellow dramaturg Rick Davis (George Mason University), during a talk-back following a reading of Calderon’s Life is a Dream in 2013 at the Embassy of Spain, in Washington.

In his role as the Literary Manager & Resident Dramaturg at Washington’s Shakespeare Theatre Company, Drew Lichtenberg ’05, is the chief literary officer of one of the most prominent regional theatres in the United States (STC was honored with the Regional Theatre Tony Award in 2012) and one of the truly eminent English-language theatre companies in the world devoted to the production of neoclassical works (the Wall Street Journal called STC, “the nation’s foremost Shakespeare company”).

During his time at STC, Lichtenberg has worked as a dramaturg on new productions of neoclassical and historical works, co-coordinated the company’s ReDiscovery staged reading series, and collaborated on new adaptations, including the world premiere of former U.S. Poet Laureate Robert Pinsky’s adaptation, Wallenstein (adapted from Friedrich Schiller’s Wallenstein plays), under the direction of STC Artistic Director, Michael Kahn. Lichtenberg’s currently at work on STC productions of The Metromaniacs (David Ives’ new adaptation of Alexis Piron’s La Metromanie [1738], directed by Kahn) and the popular musical, Man of La Mancha (directed by Alan Paul), as well as the STC/Berkeley Repertory/LaJolla Playhouse co-production of Tartuffe, under the direction of Dominique Serrand.

“[Denison] gave me a deep appreciation for the integrity of dramatic structure and the discipline demanded of a theatre scholar,”

In addition to his career at the Shakespeare Theatre, Lichtenberg, who earned his M.F.A. in Dramaturgy & Dramatic Criticism from the Yale School of Drama, dramaturged productions at Baltimore’s Center Stage, the McCarter Theatre Center at Princeton University, the Williamstown Theatre Festival, the Public Theatre’s Shakespeare in Central Park, and the Yale Repertory Theatre. An expert on early twentieth-century German theatre (he wrote his undergraduate thesis at Denison, in fact, on the plays of expressionist Ernst Toller and he is currently researching the work of Erwin Piscator and the Piscatorbühne for his D.F.A. dissertation at Yale), Lichtenberg is also a lecturer at the Catholic University of America, in Washington, and at the New School, in New York City, and a consulting editor for Chance magazine, a “serialized art-book” about design for theatre and performance.

“Without my studies in the theatre arts at Denison,” Lichtenberg writes, “I don't think I would have been able to get into Yale Drama School straight out of undergrad, or to work continuously in the field since then, at some of the leading regional theatres in the country.” Coursework at Denison “gave me a deep appreciation for the integrity of dramatic structure and the discipline demanded of a theatre scholar”; it “made me realize that history is not just something you read in a book, but something that you can actively shape, rediscover, and reimagine.”