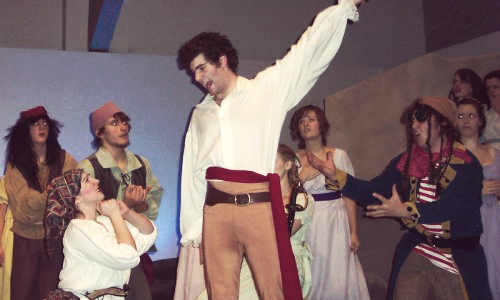 His days stomping the stage at Denison have served him well (seen here in "Pirates of Penzance"); Ben Jacoby ’09 is starring as Raoul in the national tour of “Phantom of the Opera.”

Hindsight may make it seem inevitable, but even though Ben Jacoby ’09 double-majored in theatre and English and had a minor in music performance at Denison, he never really considered that he would take to the stage for his career.

This, despite the example his father Mark set with his own stellar career on Broadway — as a member of original Broadway casts of “Ragtime” and “Elf,” and in celebrated revivals of “Show Boat” and “Sweeney Todd,” and even as the Phantom himself.

As Jacoby told The Columbus Dispatch, this spring, “I thought of it as a hobby more than anything.”

Now Jacoby is starring as Raoul, the star-crossed lover of the musical’s heroine Christine, on the critically acclaimed national tour of “Phantom of the Opera.” As Raoul, Jacoby continues his family legacy with the show and takes on iconic songs such as “All I Ask of You” with aplomb.

“It’s certainly the largest-scale production I’ve been involved in,” Jacoby told the Dispatch. “Raoul has more stage time and more to do physically than I thought when I signed on. It can be exhausting physically… I’ve never done a show like this when it’s almost entirely scored through and sung. So vocally, it can be a challenge to maintain that and it’s easy to get lost in these beautiful melodies and forget about the story you’re telling.”

“I think Denison approaches it right: You can’t hone in too specifically on acting. Even a theater major has a liberal-arts bent to it.”

While at Denison, Jacoby had plenty of opportunities to perform with both the theatre program and with Singer’s Theatre Workshop, a semester-long class culminating in a production. Among his performances were roles in “Picasso at the Lapin Agile,” “Discovery of America,” “Something’s Afoot,” “Into the Woods,” “The Pirates of Penzance” and “Urinetown.”

In his time outside of college, Jacoby also was very active in theatre with an internship at the Maine State Music Theatre in Brunswick and appearances in four shows with the Mac-Haydn Theatre in Chatham, New York. After Denison, he went on to get his graduate degree in theater from the University of California, Irvine, before moving to Chicago to begin his acting career.

“I had made a connection with an agent there, and I thought that the kind of work done in Chicago attracted me,” Jacoby told the Daily Herald in Chicago. He added that he didn’t want to be pigeonholed. “I cannot only do musicals, but straight plays and some TV or commercials.”

“Going to college at Denison helped me grow up into a much better performer than I was when I got there,” he told the Dispatch.

“I think Denison approaches it right: You can’t hone in too specifically on acting,” he added. “Even a theatre major has a liberal-arts bent to it. At Denison, you can’t just be an actor, but also have to take the course on scenic and lighting design. I take that academic approach with me when I take a look at a script for the first time.”

“Phantom” will continue its tour across North America, ending, finally in October of 2015, when the cast of 52 will take a well-earned rest.