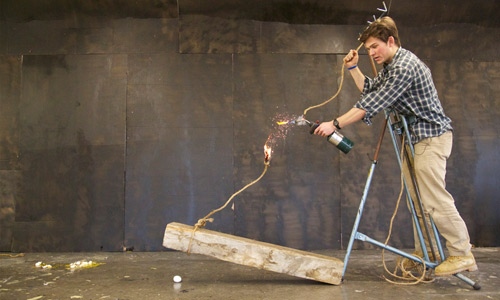 Hunter Hughes ’14 is headed for an architectural internship in NYC, where his background in sculpture may become the cornerstone of a new career.

Hunter Hughes ’14 is happiest when he’s working with tools not found in a traditional classroom: hammers, saws, clamps, pegs, nails. A studio art major, Hughes began his enthusiasm for working in wood when he attended a three-year wooden boat-building school during summers as a teenager in Maine.

During that time, Hughes learned several different techniques for putting wood together, many of which he uses in constructing his pieces today. He also brings concepts from his art classes in disciplines such as sculpture, ceramics and drawing into his work. But mostly, he is influenced by the relationship with his materials and the environment where the work is going to be placed.

“It was more important for me to explore the power of a liberal arts education, than to spend more time in the studio.”

“My ideas are informed by place, space, situations and encounters,” says Hughes, who won the 2014 People’s Choice Award of the Association of Independent Colleges and Universities in Ohio art competition. “Site-specific sculpture is what I really am drawn to.” Hughes has donated three of his sculptures to the college, one in Crawford residence hall, and two outside the Bryant Arts Center.

Micaela Vivero, associate professor and chair of the studio art department, said, “Much of sculpture is about the relationship between the viewer, the work and the space they create. Hunter’s pieces intersect powerfully with his audiences.”

And Hughes just can’t seem to stop working. Even after his classes ended for the semester, he continued to spend hours in the studio, creating.

“Hunter is making new work all the time.” Vivero said, “It’s obvious how much he loves what he’s doing.”

Hughes has accepted an internship with Robert A.M. Stern Architects, where he hopes to put his constructing skills to work in the model shop. “Model shops are great places to be,” he said. “Architects send their ideas in and come to see how they work in true three-dimensional space. It’s a terrific opportunity for me.”

Update on Hunter: In the spring of 2015, he was accepted in graduate programs at Yale University and the Rhode Island School of Design. He has chosen to attend Yale. We wish you well, Hunter.