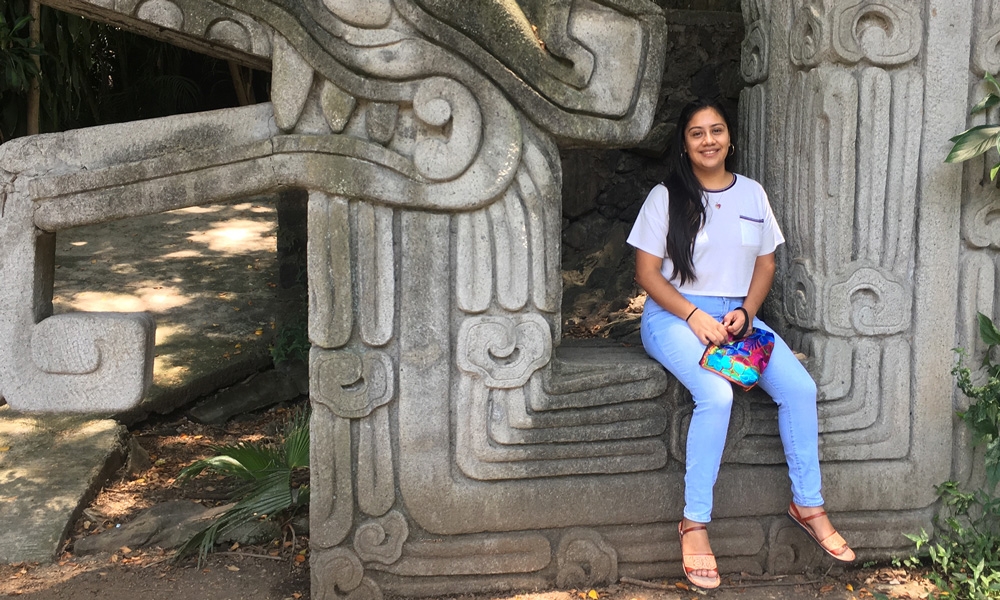 When Andrea Vallejo ‘19 goes to Mexico City to teach English through a Fulbright Teaching Assistantship, she will have come full circle.

Only three years old when she moved to the U.S. from Mexico, Vallejo gained U.S. residency and citizenship. Still, she grew up in two worlds. “I was in Chicago with immigrants, but Mexico is always home.”

Vallejo’s 2018 summer research in Mexico was a turning point for her. As she studied female migrants and the country’s reputation, Vallejo had an epiphany about the accepted stereotype of Mexico as a “backward” country.

Standing at the heart of “the Mexican Wall Street,” she thought, “Mexico is strong and powerful.”

“Look at these very strong and powerful Mexican people living in this neoliberal world, pushing through it and doing their own thing. I want to come back here and work with these people — as a person with resources and privilege to help.”

During her Fulbright year in Mexico City, Vallejo will teach English to university students. She’ll also help at-risk Mexican girls to learn confidence and empowerment in an after-school program. “When you’re a Latina in education, it’s about giving back,” she says.

“Because Mexico is a country whose goal is economic and social development, education is critical for helping teenagers pursue personal ambitions,” Vallejo adds. “As a teenager in the south-side of Chicago, I participated in similar afterschool programs that encouraged skill development and self-confidence. Afterschool programs are as valuable as formal education.”

Vallejo will model the support she has found at Denison. Spanish professor Dosinda Alvite worked with Vallejo in her role as the student leader of the Spanish cluster at Denison’s Language and Culture House. “Andrea is a passionate, curious and ambitious person who continuously tries to combine her academic and experiential learning.”

“I have learned much myself from listening to her perspectives on being a student at Denison, traveling abroad to Mexico and Central America, and from her life in Chicago,” adds Alvite. “She is a well-rounded student who has enriched my life.” In return, Vallejo credits Alvite as the influence that strongly encouraged her to apply to Fulbright.

Another mentor is English Professor Brenda Boyle. “I thought Andrea had the qualities to succeed: tenacity, persistence, willingness to be uncomfortable, low material needs, acceptance of difference, and abiding intellectual curiosity,” says Boyle.

“As Andrea’s mentor and someone on campus who knows her best (for five years), my thought is that she will learn a lot about herself, her Mexican heritage, and her American citizenship. I have every confidence that she will be an excellent American ambassador,” says Boyle.

“It is my time to reap what I have sowed. This is for the groundbreaking women behind me and the younger generations without resources,” says Vallejo. “Fulbright is breaking that glass ceiling.”

Vallejo was one of 24 students who were awarded international scholarships in 2019. Denison has been named a Fulbright “Top Producing Institution” by the U.S. Department of State Bureau of Educational and Cultural Affairs for three of the last four years. Provost Kim Coplin noted, “These honors and scholarships are extremely competitive. Denison students are up against the best and brightest at institutions across the nation. The fact that our students are so successful in achieving these distinguished awards is indicative of Denison’s rigorous academics that prepare our students for the lives they want to lead.”

During her time at Denison, Vallejo majored in International Studies and Spanish. She also studied abroad in Guatemala, Costa Rica and Nicaragua.