COVID-19 may wreak havoc but it’s also an opportunity to get creative. Adam Schlenker, director of Denison’s Bluegrass program, turned the challenge of crafting an engaging musical performance for a virtual audience into a history lesson. 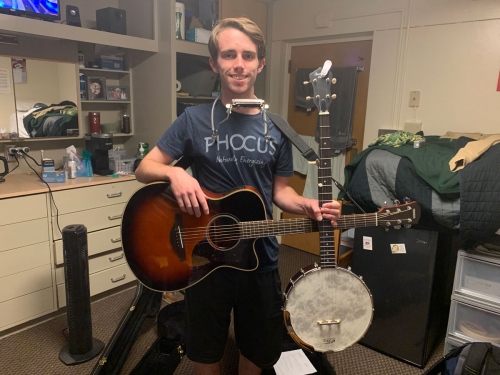 “Since live performance with an audience isn’t really happening right now, Bluegrass students are focusing on developing a ‘radio show,’ says Schlenker. “We are aiming to produce three episodes this semester that include historical background segments to set up the show, live on-stage recordings of the students’ arrangements, and a Q&A segment with Grammy Award-winning guest artist, Aoife O’Donovan.” 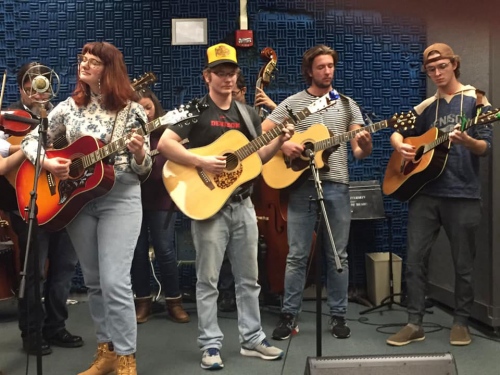 Evidently, the word has gotten out about the excellence of Denison’s Bluegrass musicians. The Bluegrass Ensemble has been invited to perform at the International Bluegrass Music Association Bluegrass Live Concert, the largest free urban bluegrass festival in the world. You can enjoy the virtual performance in the video above.

Bluegrass is a new - and enlarging - experience for many students. Singer and guitarist Sunny Stier-Wood ‘22, (History and Spanish major), had previous classical and pop acapella vocal training but had never done anything like bluegrass-style singing before. A self-taught guitar player at a beginner-intermediate level before coming to the ensemble, she has honed her skills.

Making music together during a pandemic is hard!

Stier-Wood says it was most difficult to keep rhythm with others while being six feet apart. “But I think this is similar to exercising at high altitude. When I’m at home in Denver, things like running are difficult because of the altitude, but in doing so, I develop skills that make it easier and more fulfilling to exercise when I come back to Ohio.”

“When I first joined the Bluegrass Ensemble as a freshman, I was absolutely terrified of guitar solos,” Stier-Wood says. “Learning how to play backup first, as well as gaining the foundations of bluegrass strumming patterns, was helpful for me as I began to learn the more advanced side of guitar such as improvising and stylizing solos.”

On the other hand, Kentucky-born Blythe Dehlam ‘23 (Economics major with a Bluegrass concentration), has been listening to bluegrass since he was a young boy. “The more I’ve learned about bluegrass, the more I’ve fallen in love with the genre and the tradition of the music that surrounds it.”

Dehlam sings and plays guitar and harmonica, and he recently plunged into the banjo - a notoriously difficult instrument. “I picked up the banjo this year because I just loved the sound of it and the versatility it has in different genres of music, but I’m mostly interested in learning the Earl Scruggs-style,” he says.

While Bluegrass may be new to students, it has a history deeply rooted in America and themes that are relevant today. “Bluegrass is history in musical form,” says Stier-Wood. “It’s a type of oral tradition; a type of storytelling: in fact, many bluegrass songs circulated orally long before they were recorded. As a history major, I am very attracted to these stories.”

“Bluegrass is a very personal genre of music. You sing a song like the Carter Family’s “Storms Are On the Ocean,” about a parent leaving their child, and you feel an immense respect and importance in carrying that incredibly vulnerable story when its original narrators are no longer around to tell it,” she adds.

Episode 1: The impact and influences of Blues music on American Roots Music, including Bluegrass: soundcloud.com/episode-1

Episode 3: Diversity in American Roots Music: A look at the Newport Folks festival 1959-1969.