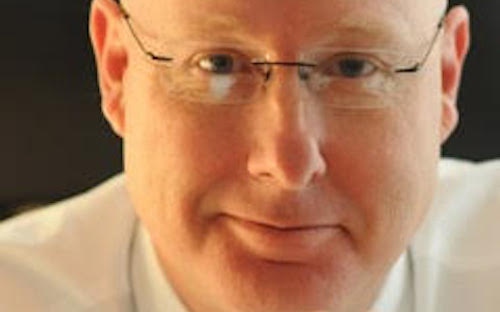 For David Evanson '82, literacy in math opened a new career as a financial writer.

David Evanson is a financial writer who writes for the financial trade media as well as financial services companies such as asset managers, brokerages and mutual fund complexes. In addition, he provides select organizations financial communications consulting services.

I was probably the worst math student in the department when I was at Denison University from 1978 to 1982.

My high school career was poor to middling and I felt that completing a math major, in addition to an econ major, might cleanse my past.

I started all the way back at pre-calc, and as I worked my way up, my GPA went down. Happily, whatever math skills gained through osmosis enabled me to garner a 4.0 in economics.

Still, at the mathematics building it was bad. I remember getting a 23 on a statistics exam. My GPA in math was below 3.0, but how much further I didn’t want to know.

I took actuarial tests twice, once in Scotland no less, where actuarial science was invented, and once in Philadelphia, where I lived. I failed miserably both times.

At that juncture, math wasn’t so much a skillset as a mindset.

If anyone told me how often gainful employment rested upon, in one respect or another, the GPA in one’s major, I might have rethought the math major strategy.

But the student is in no position to judge when their lessons might become relevant.

About four months after graduation I got a job in publishing. It involved reading a lot of prospectuses, and knowing how to do the required basic algebra probably got me the job.

Later, in graduate business school, having quantitative skills eased my way and provided a significant competitive advantage over other students, some of whom were innumerate.

I parleyed my publishing experience into a career as a financial writer for the media and corporations. Because I knew math, I had chops, or at least my clients thought I did.

Working with financial statements was important — and yes these statements had numbers — but the required skill was to understand them well enough to draw and expound upon well founded (or at the very least tenable) inferences.

At that juncture, math wasn’t so much a skillset as a mindset. It was the discipline that enabled me to organize words into sentences, into paragraphs, into complete works — all with, as I like to tell myself, — numerical order and precision.

Now, today, as a financial writer and a media relations consultant, the stars have finally aligned, at least as it concerns why my focus on mathematics in college turned out right.

That’s because writing is no longer just scribing. Writing is writing, yes, but a big part of the job is also trying to figure out the social media platforms to project it onto and how. And all the data those platforms send back to me I can analyze and act upon in a way few can – at least few of the people I write for, whom are likely to have very little in the way of numerical skills. In the end, this skill might account for whatever success I’ve enjoyed lately.

With respect to consulting on the media, the surest way to get a client exposure, whether it’s CNBC, or Bloomberg or The Wall Street Journal or the New York Times, is to develop statistically valid surveys. With all of the Big Data coming out of clients’ operations, this is easy. Easy, that is, if you understand statistics, sample sizes, linear and (admittedly, only on rare occasions) multivariate regression analysis as well as analysis of variance or ANOVA.

A math degree even helps with statistically invalid surveys. If you can explain the shortcomings of what you are presenting to a reporter or producer based on the underlying math, many times they feel informed well enough to use it anyway.

In addition to my grade point average in math, the other thing I don’t want to think about is how much math I’ve forgotten since 1982. I’ll say this: my understanding of the math I do remember has grown, attributable to mulling it over for about 35 years, generally in the pursuit of suburban labors such as cutting the grass or shoveling the driveway.