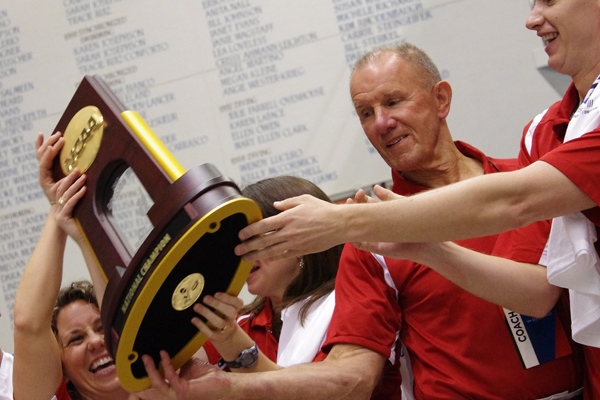 A love of education, athletics, and giving back has created a life of impact.

Walk down the streets of Granville or Newark with Bill Mason ’57 and you won’t get very far without someone calling his name. And you will hear the affection in their voices, because Mason is one of those people who has had a lot of impact on people’s lives.

I’ve run a billion-dollar company and have known people from all walks of life, including heads of state,” says Paul Jenks, a friend of Mason and former president and CEO of Veolia ES Solid Waste Inc., “and I rate Bill as one of the top 10 best people I know.”

During his 30-plus years as an educator, Mason was a science and physical education teacher, coach and principal — followed by 22 years as assistant superintendent for Newark City Schools. He also serves as vice president of SchoolMatch, an educational research and consulting firm that matches children with appropriate schools nationwide.

And as importantly, he has a genuine love of athletics that has played out during his entire career.

Mason first came to Denison as a student largely thanks to a scholarship from George Roudebush ’15, who had been a standout athlete at Denison. Roudebush was the quarterback for the famous 1914 Denison team that won the Ohio Conference title and became renowned for its execution of the newly introduced forward pass.

When he offered the scholarship to Mason, Roudebush asked only two things: To go out for sports and to get good grades — and to do his best at both.

Mason took those requests to heart. He became a physical education major who went on to earn a master of education. At Denison, he was a basketball player and an avid lacrosse player, and in his senior season at Denison, he was captain, MVP, and a member of the All-Midwest Lacrosse Team. His 1957 record for 38 consecutive controlled face-offs still stands.

Mason co-founded the Columbus Lacrosse Club, and to this day, he continues a more than 50-year career officiating lacrosse. In June 1996, he was inducted into the Ohio Lacrosse Hall of Fame and is the only person to be honored in all four Hall-of-Fame categories—player, coach (having served as a coach of Denison’s lacrosse team), official, and “Pioneer” (a significant contributor to the game of lacrosse).

Community service is another bulwark of Mason’s character. He has served on the Newark Chamber of Commerce, Jaycees, Lions Club, the Licking County YMCA Board of Trustees, the Licking Alcohol Prevention Program and the Granville Volunteer Fire Department.

Mason’s service to Denison has included involvement with DART, the Career Network, a term as an Alumni Council Member-at-Large, and president of the Alumni D Association/Representative to Alumni Council. A current volunteer coach with Denison swimming and diving, he also is a member of the Alumni Inter-Fraternity Council and works tirelessly in support of his fraternity, Sigma Chi.

In 2003, Mason received a Denison University alumni citation, the highest honor the college can bestow on its alumni. In what may be the best summary of Mason’s impact on those around him, a part of that citation reads, “We honor William R. ‘Bill’ Mason ’57 for his belief in the power of giving back and for clearly illustrating through his own actions that the discipline of athletics provides a strong foundation for everything in life.”

Married for 55-plus years, Pat Mallett Mason has seen her husband in action throughout his career. “Bill gives 110 percent to everything he does — he’s just an amazing man.”