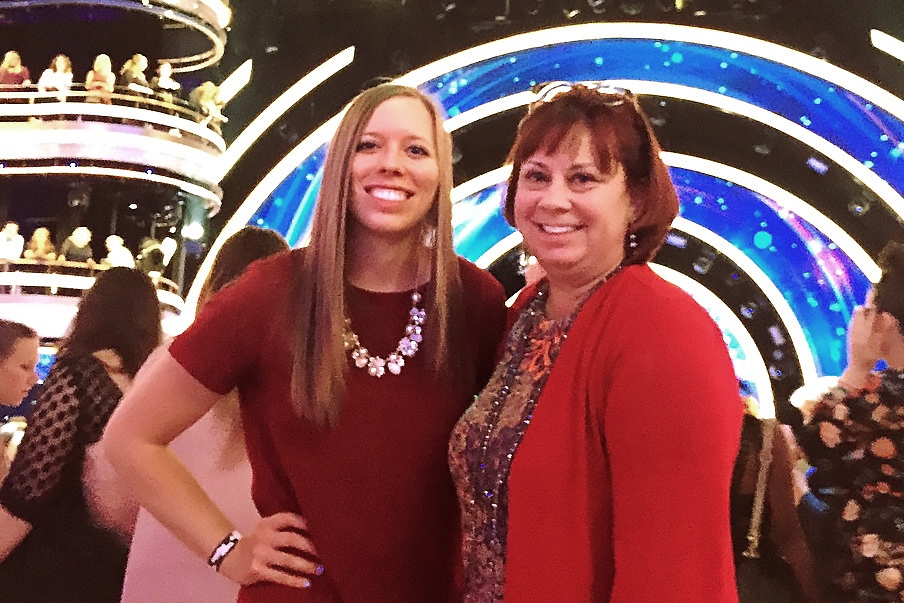 Emily Marguerite '15 with Jeannie Goldstein '88 at the LA studio for "Dancing With The Stars," where one of their clients was competing.

When Denisonians talk about their post-college lives and careers, one thing that comes up again and again in conversation is the power of the Denison network. Denisonians help each other find that first job, get the important introduction to a valuable connection, and become lifelong friends and mentors. Jeannie Goldstein ’88 and Emily Marguerite ’15 are stellar examples of that constructive, almost magical, Denison connection.

In 1988, Goldstein, a French major and a Spanish minor, was ready to graduate and share her appreciation of languages and cultures with young students.  She thought she was headed into a career teaching French, but a January-term internship — which she acquired through Denison alumni — changed all that.

“The January before graduation, two Denison alumni, Kari Volk Mutscheller ’82 and Garrison Miller ’81, helped me get a short internship with ProServ, a sports marketing agency,” said Goldstein, who was a dedicated tennis player on the Big Red team.

“I worked on tennis events with great players like Andre Agassi and Pete Sampras. For a college tennis player, it was pretty amazing.”

Her enthusiasm for the work netted her a job offer with the agency, a subsidiary of Leo Burnett. “Both Kari and Garrison helped me continue my career at ProServ after the internship. They both became friends and mentors to me, and I ended up working directly for Kari.”

Goldstein worked on the pro-tennis circuit for years before she asked herself: “Why am I not doing this for myself?”

She found two like-minded business partners and took the plunge in 2009, forming Chicago Sports and Entertainment Partners. Today she represents athletes and manages their appearances at events and as motivational speakers for workshops.

Thinking about her business needs, as well as an opportunity to “pay it forward,” a couple of years ago Goldstein attended a Denison Connecting event in Chicago, where she co-led a break-out group in marketing. She mentioned that she had an entry-level marketing job open — and by the end of the evening, she had resumés from Denisonians in her hand.

Emily Marguerite ’15, an economics and environmental studies double major, stepped into the position shortly after her graduation.

“It was a pretty cool entry-level position,” says Goldstein. “Emily worked hard and learned from all three of us founding partners.”

Marguerite was thrilled with the opportunity. “I was really captivated by Jeannie and what she told us about her business. I played volleyball at Denison, and sports are important to me. We had that in common. This was a super opportunity to work in sports and learn some great business skills.”

“I learned so many things from Jeannie and the other partners,” she adds. “As the account coordinator, I was responsible for the speaking engagements for our athletes from start to finish. I also learned some accounting, marketing, and got to see so many aspects of how a business like this works.”

Marguerite now works at Citadel Financial as a recruiting coordinator. “Jeannie is still such a good mentor to me, even though I’m in a different job now.”

Goldstein knows she will be successful and wishes her well. “Emily did an amazing job. She is very detail-oriented and could foresee issues and solve them before they even came up.”

The Denison Connecting program was important to both women. “I was just out of college and not sure of what direction I wanted to take,” says Marguerite. “So I took a chance and stepped out of my comfort zone when I went to the Chicago Denison Connecting event – it was amazing.”

“We got a great employee through Denison,” says Goldstein. “Besides being very good at her job, I also really enjoyed quizzing her about campus.”

“I feel like everyone wants to help and learn from each other,” says Marguerite. “And it’s great to talk about Denison together. I highly recommend that alums of all ages go to these events. You never know who will come into your life.”