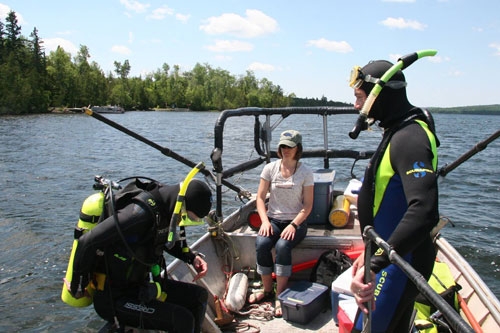 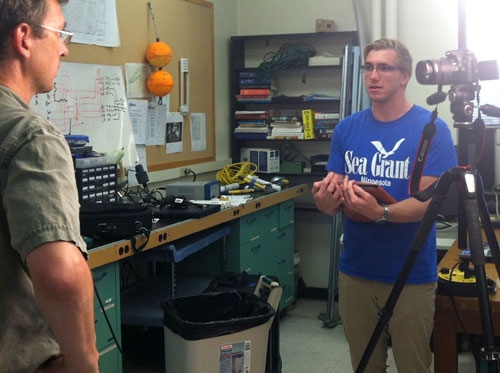 When English Literature and environmental studies double major Ryan Strother ’17 applied for an internship with Minnesota Sea Grant, he was challenged to utilize both research and writing skills from his liberal arts and sciences background.

Strother worked on several projects during his internship, including a series of public service announcements (PSA) to be aired on northern Minnesota cable. He was involved in all steps of the science outreach project: researching, scripting, coordinating interviews, incorporating graphics, and he even took a starring role.

“Minnesota Sea Grant does a lot of different things, one of which is science communication to the community. We wanted to do PSAs about the science research associated with Lake Superior.”

“The liberal arts helped me be more versatile. If I were just an English major, I don’t think I’d be able to have the same success in writing about science.”

The final products were four two-minute videos that included interviews with scientists in the field.

“They aired on Minnesota Cable for four days and got a lot of reach. I think they did a great job of increasing public literacy and all the scientific research associated with Lake Superior.”

As a small example of the variety of his experiences, Strother shared: “I followed a graduate student in her field research, which was endocrine disruption in small mouth bass. So one day I got to go up to Grand Marias, on the northeastern tip of Minnesota, with her and her research team on a remote lake while they collected specimens.”

“During my Sea Grant experience I wrote, but I had to learn about the scientific issues first. I’ve been through the process of writing a research paper before and finding sources,” said Strother. “What I actually did was communicating science so my work was cross-disciplinary by nature.”

While Strother relied in his writing and researching skills for his internship, he has brought internship experience back to his classes as well.

“I’m taking Narrative Journalism with Dr. Jack Shuler and I am writing about Great Lake Fisheries. I have so many resources and people I know now.”