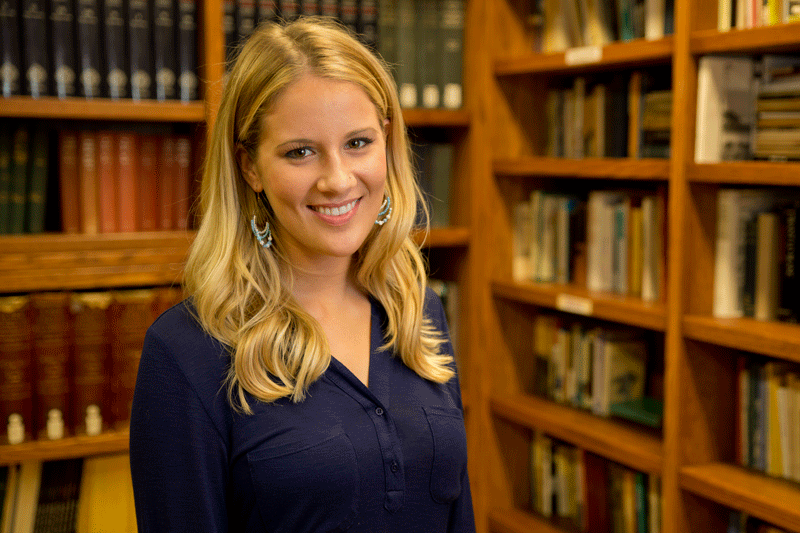 “Literary Theory taught me to see meaning, both good and bad, in all that I did.” - Cheyanne Cierpial, a member of the Denison class of 2016

Walking into Introduction to Literary Theory on the first day of my sophomore year, I thought it would be just another English class. When I walked out of that class fifty minutes later, I left doubting the significance, meaning, and quite frankly, existence of the closet door inside the classroom.

How could we spend the majority of the first day debating a door? More importantly, how could a professor’s class discussion make me question something as concrete and simple as a wooden closet before me? I think this must be what they warned me about when I entered the liberal arts.

When people ask me why I say that Lit Theory changed my life, I have an elevator speech ready. It goes like this: I walked into that class as one person. And then, everything I knew and was sure of in the world was deconstructed, dismantled, and torn to shreds. I was left to build it all again, from the ground up. And put quite simply, I was never the same again.

We read Plato, Karl Marx, Virginia Woolf, Jacques Lacan, Sigmund Freud, Adrienne Rich, Susan Bordo, Louis Althusser, Michael Foucault, and several more. Each student in the class lugged around this enormous Norton Anthology of Literary Criticism that Professor Regina Martin asked us to bring to class each Monday, Wednesday, and Friday. I complained for the first few weeks. It wouldn’t even fit in my bag with my other books for the day, so I had to carry around in my arms all day.

I began to understand words and phrases like ideology, patriarchy, hegemony, subjectivity, disciplinary apparatuses, and systems of power and privilege. It was challenging and required me to think critically, but what made this class so life changing or at least so different from anything I had ever experienced before this?

I asked Dr. Martin, if she could help me describe this phenomenon. She told me: “I think [literary theory] helps you understand. The idea that our everyday activities have a meaning and implications far beyond the obvious helps us to understand how those everyday activities contribute to power structures and racial and gender dynamics. Then it kind of inspires you to analyze incessantly.”

She’s right; it is just that. I began to see meaning, both good and bad, in all that I did. The choices I made were suddenly not my own, but rather I was hyperaware of all the factors influencing them.

“I started to love that Norton Anthology. It sat on the table in the dining hall during breakfast, lunch, and sometimes dinner. There were nights that I fell asleep on it and woke up on open pages of theoretical texts.”

That is an indescribably freeing and powerful feeling. To understand and see the world in a completely different and complex way is to open your eyes to so many things. As one may expect, that isn’t necessarily easy to handle or deal with. Yes, it is freeing, but more so it can be frustrating.

I remember Professor Martin saying at the end of the semester that the more knowledge you have, the more messed up things begin to look. You can’t fix things, or at least change things, until you are able to see through it and erase your own ignorance. We, as a class, sat down and had some tough conversations. We identified issues that plague our society; we connected them to see how they play into each other and where we fit in.

I started to love that Norton Anthology that I used to complain about. It sat on the table in the dining hall during breakfast, lunch, and sometimes dinner. There were nights that I fell asleep on it and woke up on open pages of theoretical texts. I had rented it used from the bookstore, with a duct-taped front cover that was falling off, and then I happened to fall in love with it. These intricate and overwhelming texts became marked up, pages folded and eventually understood. At the end of the semester, I had grown so attached to it that when I went to the bookstore to return the rented book, I bought it instead.

On the last day of class, Professor Martin brought in two containers of cookies for our deemed “debriefing” day. We sat around and talked. Some students asked how to change the issues we discussed throughout the semester. Others brought up what cultural artifact they were critically analyzing for their final essay. I wanted to know how we were supposed to leave that classroom and just deal with it all, make sense of it all, interact with people who didn’t share this experience with us.

Professor Martin shared how literary theory had changed her life. And when the minute hand on the clock reached the number four, marking the end of the class, no one really moved. We all just sat there for a few minutes staring at each other. When I did finally leave that classroom, I couldn’t help but think how this is what the liberal arts are all about.