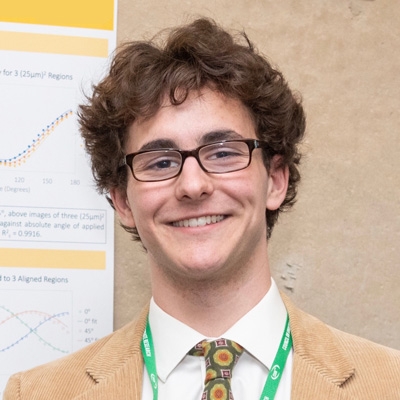 “I am interested in cognitive science primarily because of the way it integrates the humanities alongside the kind of science-intensive coursework that I anticipate seeing in medical school, on my return to the United States,” says Wallace. “I believe that graduate coursework in cognitive science will prove particularly valuable to my pursuit of a career in neurosurgery and medical research by exposing me to a diversity of ways of looking at human experience: through philosophy, psychology, linguistics, neuroscience, and modelling.”

Adam Davis, director of Denison’s Lisska Center for Scholarly Engagement, notes, “Hoke Wallace’s academic record at Denison has been extraordinary. He has seized every opportunity to do cutting-edge biochemistry research, earning him a coveted Goldwater Scholarship and an invitation to present his research to members of Congress at the United States Capitol as a participant in ‘Posters On the Hill.’ I’m thrilled that this Fulbright award will enable Hoke to pursue a graduate program in cognitive science in Paris at one of the world’s leading programs. His future work in clinical cognitive science and neurophysiological research promises to expand our understanding of some of humanity’s most pressing challenges.”

The design of PSL’s Cogmaster takes a unique approach to instructing graduate coursework in cognitive science. By offering coursework through a consortium of institutions in and around Paris, the Cogmaster is structured such that specialized subject matter is taught at institutions and by professionals who specialize in that subject matter. Not only does this arrangement allow master’s students access to the most highly specialized professionals in each of the many sub-disciplines of cognitive science, but it also creates opportunities for students in the program to achieve meaningfully specialized degrees (“majors”) in one or many of these sub-disciplines.

“The discipline’s multi-faceted approach to understanding the brain makes cognitive science diverse in scope,” says Wallace, “but I believe that my liberal arts education at Denison University has prepared me exceptionally well for the curricular diversity of PSL’s Cogmaster.”

He adds, “Moreover, my experience conducting research in the Reczek Laboratory at Denison has given me a competitive edge in constructing and rigorously interpreting experimental models of complex physiological phenomena, both in the classroom and in my laboratory work with Dr. da Silveira. Through the course of my two years in the Reczek Group, I have focused on controlling the optical and piezoelectric properties of bi-component donor-acceptor columnar r liquid crystals (DACLCs) both at the molecular scale through organic synthesis, and at the macro-scale by preparing, probing, and characterizing bulk films of these materials.

Wallace has authored one manuscript about this research (submitted to Nature Comm.) and is preparing a second. He was awarded a Barry Goldwater Scholarship for his research and has been invited to present this research to members of Congress at the United States Capitol as a participant in Posters On the Hill, an event hosted by the Council on Undergraduate Research.