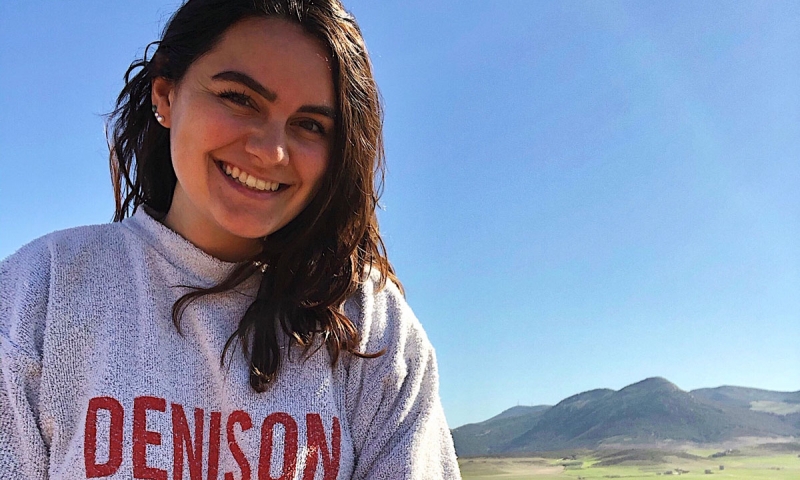 The college is ranked No. 16 in the nation among its peers. This is the sixth year that Denison has ranked among the top 25 of these schools. Since the agency’s founding in 1961, more than 285 Denison alumni have served abroad as Peace Corps volunteers.

Olivia Stafford graduated from Denison in 2019, with majors in international studies and Spanish, and is serving as a youth in development volunteer in Morocco.

“My time at Denison both prepared me and encouraged me in my decision to serve with Peace Corps because of its liberal arts foundational values in becoming a well-rounded and knowledgeable member of society,” says Stafford. “The classes I took and the relationships I built throughout my four years have prepared me well in my commitment to serve for two years.”

Students at Denison, currently ranked #43 on the national U.S. & News World Report, experience a liberal arts education that is among the best in the country. Through abundant study abroad programs, international internships, global academic programs, and off-campus summer research opportunities, 80% of Denison students take part in an intensive off-campus academic experience. These immersive experiences build knowledge and capacity — within six months of graduation, 94% of the most recent graduating class were employed, in graduate school or completing post-graduate service.

“These schools are institutions that emphasize being global citizens and service-minded students,” says Peace Corps Director Jody Olsen. “I am excited to know the graduates coming from Peace Corps’ Top Colleges are using their skills to make a positive impact on their communities at home and abroad.”

“Denison offers the opportunity to make our transformative college years our own while welcoming its students to build a community of compassion with the people around them,” says Stafford. “I graduated from Denison bringing my own diverse experiences and understanding of cultural differences to Morocco with the intention of learning more about my Arab background and language while also sharing my American culture with Moroccans.”

More about the Peace Corps

The Peace Corps sends Americans with a passion for service abroad on behalf of the United States to work with communities and create lasting change. Volunteers develop sustainable solutions to address challenges in education, health, community economic development, agriculture, the environment and youth development. Through their Peace Corps experience, volunteers gain a unique cultural understanding and a life-long commitment to service that positions them to succeed in today’s global economy. Since President John F. Kennedy established the Peace Corps in 1961, more than 240,000 Americans of all ages have served in 142 countries worldwide.