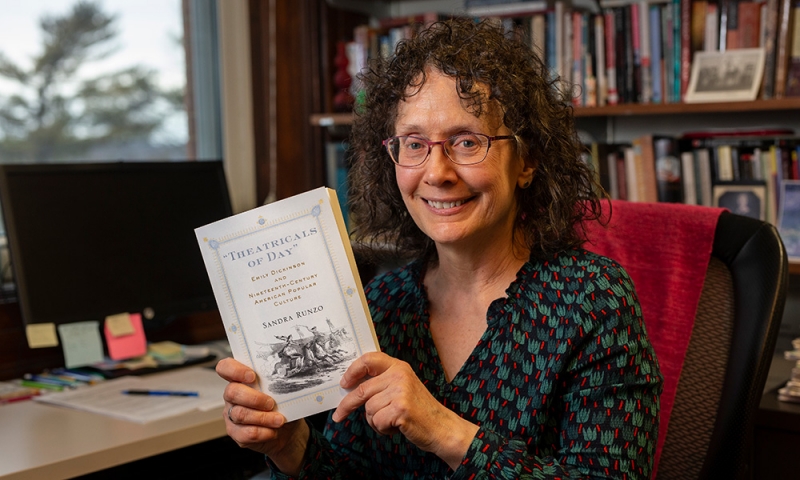 Denison University Associate Professor of English Sandra Runzo has published a new book, “‘Theatricals of Day’: Emily Dickinson and Nineteenth-Century American Popular Culture,” in which she examines the relationship of 19th-century poet Emily Dickinson to the popular entertainments of her own time.

Published by the University of Massachusetts Press, “Theatricals of Day” explores how popular culture and entertainments are seen, heard, and felt in Dickinson’s writing. Runzo proposes that noticing the presence of popular entertainment in Dickinson’s life opens our eyes to new dimensions of the poems. The proliferating sites of popular amusement and mass culture in 19th-century America—such as circuses, minstrelsy, and early photography—provided vehicles whereby matters of most serious significance were brought to the attention of mass audiences—virtually anyone and everyone—for engagement and contemplation.

In her book, Runzo demonstrates that Dickinson participated in the popular entertainments of her time. On her piano, Dickinson performed popular musical numbers, many from the tradition of minstrelsy, and at theaters, she listened to famous musicians, including Jenny Lind and, likely, the Hutchinson Family Singers. In reading publications such as the “Atlantic Monthly” and the “Springfield Republican,” she kept up with the roiling conflicts over slavery. She read current fiction. She enjoyed the spectacles of the traveling circus.

Runzo says that a turning point in the project came when she acquired copies of all the sheet music in Dickinson’s personal collection: “The Protestant hymn is commonly associated with Dickinson’s verse, but this was all secular music. She wanted to play lively dance music and songs like ‘Oh! Susanna’ and ‘Old Dan Tucker.’” While Dickinson is often placed in private spaces, Runzo contends that recognizing Dickinson’s participation in the wide-reaching, often rambunctious world of popular amusement makes more visible her social and political consciousness.

Runzo has been teaching at Denison since 1986. With a Ph.D. from Indiana University, Bloomington, she teaches courses in American literature and culture, women writers, and queer literature. Runzo holds the Lorena Woodrow Burke Chair of English and is the director of Denison’s Queer Studies program. Runzo served as English Department Chair in the years 2002—2007 and 2014—2016.