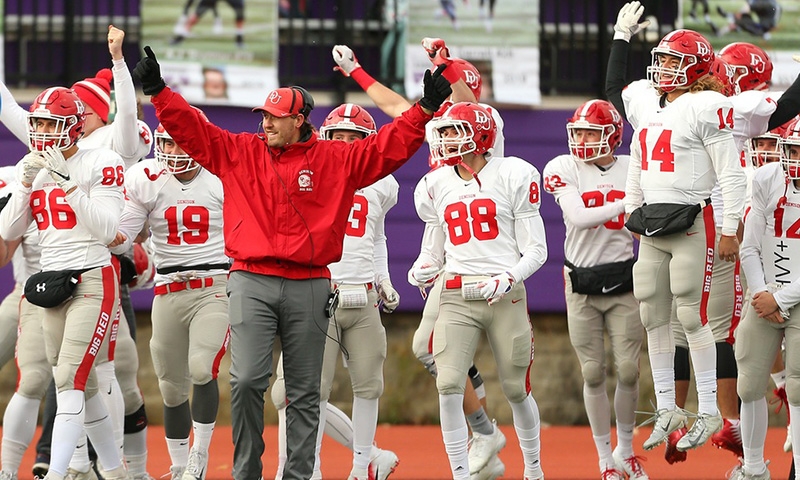 Most breakthrough seasons have some trials and tribulations along the way. Denison football entered the 2018 season full of expectations after 22 wins over the last three seasons. A week one loss to Southwestern (Texas) didn’t faze a veteran squad filled with a program-high 29 seniors. Neither did a heartbreaking 68-66 4OT loss to No. 11 loss to Wittenberg that saw DU claw back from a 25-point halftime deficit.

The team kept the faith and remained true to the journey. The next week they were rewarded with one of the most memorable wins in program history. Denison controlled every facet in a convincing 34-10 win over No. 22 Wabash. That win sparked a six-game winning streak to end the season. Sprinkle in a Wabash win over Wittenberg and Denison’s season was made. A three-way tie for the NCAC championship resulted in the Big Red’s first league title since 1986 and the program’s first NCAA playoff appearance since 1985. Denison drew top-ranked and defending national champion Mount Union in the first round. The Purple Raiders demonstrated why they have dominated the Division III football landscape over the last quarter century with a first round win, but Denison’s name was on the map.

Senior quarterback Canaan Gebele ’19 leaves as one of the most decorated players in program history. He is the only player from Denison to be named a semifinalist for the Gagliardi Trophy which is presented to Division III’s best player. He was named the NCAC’s Offensive Player of the Year while rewriting the Denison record books.

Nine-year head coach Jack Hatem was the subject of a national feature in the Sporting News leading up to the first round of the playoffs. Since 2013 he has led Denison to its most successful six-year stretch in the 128-year history of the program at 43-18. Denison football is back.

Denison women’s soccer returned to the top of the NCAC standings after finishing the season with a 12-3-2 overall record and an undefeated 6-0-2 ledger in conference play. Denison was ranked in the top-25 of the Division III rankings en route to the team’s 10th conference championship.

Maggie Armstrong ’19 was named to the Division III All-American team and was named the NCAC’s Midfielder of the Year. She is the 13th women’s soccer player from Denison to earn All-American status and the program’s first player since 2010 to do so. Liz Gilbert ’22 and Kelly O’Neill ’21 joined Armstrong on the Great Lakes All-Region team.

Head Coach Gail Murphy was named the NCAC Coach of the Year for the fourth time. Murphy has guided Denison to seven conference titles, three conference tournament titles and an overall record of 291-112-40 (.692).

Denison Field Hockey continued to prove it is the preeminent program in the region after a sparkling 18-3 record and perfect 14-0 mark in the NCAC. Denison took a 13-game winning streak into the NCAA Division III Tournament before falling to Lynchburg in the second round.

The Big Red outscored the opposition 51-14 while featuring one of the best defenses in the nation. Head Coach PJ Soteriades was named the NCAC Coach of the Year for the fifth time in her career. Over the last two seasons the Big Red has won two NCAC championships with a stellar 35-7 record.

Men’s Soccer qualified for the NCAC tournament for the second-straight year and they did it in dramatic fashion by defeating nationally ranked Ohio Wesleyan in the regular season finale. Leo Herard ’22 scored the first goal of the match in the 11th minute and Stu Windell ’22 gave Denison a 2-0 lead with 15 minutes left in the match. Ohio Wesleyan scored in the 78th minute but goalkeeper Dylan Brown ’21 kept the Battling Bishops off the board down the stretch. He finished with a season-high 11 saves. They finished the season with a record of 7-8-2 and a 5-2-2 mark in conference play.

Volleyball finished the season with 11 victories and qualified for the NCAC Tournament under second-year head coach Carter Cassell. In NCAC play the Big Red went 3-5 with victories over Wooster, Allegheny and Kenyon. First-year Payton McElfresh was named the NCAC Newcomer of the Year in addition to receiving second-team all-conference honors. McElfresh is Denison’s first Newcomer of the Year winner since Katie Quinter ’06 won the award in 2002.