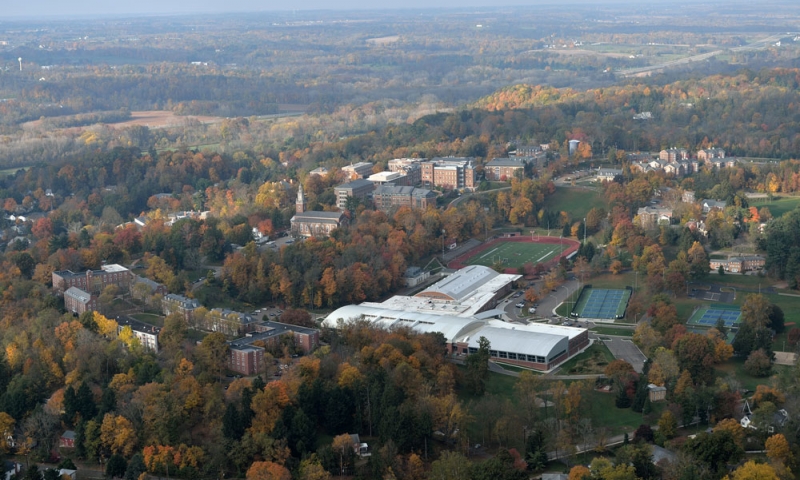 Denison is one of only 10 colleges nationally — and the only college in the Midwest — that is recognized in the top 50 of both the US News and World Report National Liberal Arts rankings and the Learfield Director’s Cup D-III standings, a ranking of the top National Association of Collegiate Directors of Athletics. Denison is keeping good company within this elite group, alongside Amherst, Bates, Bowdoin, Claremont-Mudd-Scripps, Middlebury, Pomona-Pitzer, Washington & Lee, Wesleyan, and Williams.

Denison has a longstanding tradition of excellence in athletics, and this year, the college captured its record-breaking 16th NCAC All-Sports Championship.

It was another banner year for Denison athletics with a number of teams earning their place in NCAA postseason competition. Highlights include Denison capturing its fourth NCAA national championship in men’s swimming and diving and its 10th consecutive conference championship. In addition, Denison’s women’s swimming and diving squad placed fourth in the NCAA national championships. The Big Red women’s lacrosse program won both the conference championship and the NCAC tournament title. They have not lost a league game since 2015. Football’s senior class graduated with more wins than any class in the last 30 years. Only two classes in the 128-year history of Denison football has won more games than this group. Men’s lacrosse also won the NCAC tournament championship and was ranked as high as second in the nation this spring. The Big Red field hockey team won 15 straight games and won both the regular season crown and tournament championship while advancing to the NCAA Tournament for the 12th time in program history. The Denison baseball team earned an invitation to the NCAA championships for the first time in program history while setting a new single-season record for wins with 32. The cap off the year, Arlesha Cospy ’18 placed fourth in the discus at the NCAA Division III Outdoor Track & Field Championship.

How do coaches and mentorship bring excellence to student performance?

Athletics programs are built on the skill and hard work of athletes along with the support, training, and mentorship of coaches. Denison coaches make a difference in their students’ lives, both on and off the field.

University President Adam Weinberg commented, “Beneath the incredible winning seasons is a group of coaches who are world-class educators and mentors. This means they are recruiting amazing student-athletes to the college, then mentoring them at the highest level, which leads to remarkable performances and exceptionally healthy team cultures.” Weinberg went on to say, “Our teams are fun to watch when they are competing. It’s not just that we win, it’s how we win. Our athletes and teams represent the college exceedingly well every time they enter a field, court, track, or pool.

“Competitive excellence is the cornerstone of our athletics program, which is based on our values of trust, teamwork, integrity, leadership, growth, mindset, and diversity,” says Nan Carney-DeBord, associate vice president and director of athletics. “We have a premier Division III program here at Denison. Our coaches care about every athlete — and it shows in our students’ performances, both as athletes and as scholars.”

Denison All-American swimmer Hannah Rusinko ’20 is an example of how an outstanding coach can be life-changing. Rusinko, who has Tourette’s syndrome, spoke about Coach Gregg Parini’s mentorship. “When I met with Gregg, the amount that he truly cares about every single person is clear. Whether you are at the top of the roster or the bottom, he has a goal for each and every one of us, and he convinces us that with hard work, we can achieve it.”

Lacrosse captain Tommy McMaster ’19 likewise commented on the mentorship of Coach Mike Caravana, who unites players from all over the country into one tightly woven team. “Every season is different, each one with its own challenges. ‘Coach C’ wants consistency and quality. You never know when you’re going to be the next man up — it’s a good life lesson,” says McMaster.

How do college athletics contribute to overall student success?

President Weinberg summarized, “At Denison, athletics is an extension of the liberal arts. We believe that a college experience is greatly enhanced when students find life-changing mentors who care, connect and catalyze them; learn to perform at the highest level in ways that leads to the development of important skills, values and habits; and surround themselves with outstanding peers allowing lateral learning to take place. Each of these factors matter and they define our athletics program.”