Fencing is a continuous whirl of action, with fencers shifting from offense to defense in the blink of an eye.

Sizing up the Opponent:

Before bouts, de Laperouse takes stock of her opponent. Because she’s only 5-foot, the target area is a lot smaller on her body than on taller fencers. “Tall people hate short people because we love to get in their space,” de Laperouse says. “We call that infighting, where we have to move our bodies in really weird ways to get our blade to hit their lamé.”

Offense to Defense and Back Again:

Fencing is a continuous whirl of action, with fencers shifting from offense to defense in the blink of an eye. Some fencers are aggressive; others prefer to hang back until they get an opening. De Laperouse is both. “I don’t necessarily have a style,” she says. “I adapt to their style. It’s a back-and- forth kind of thing.” 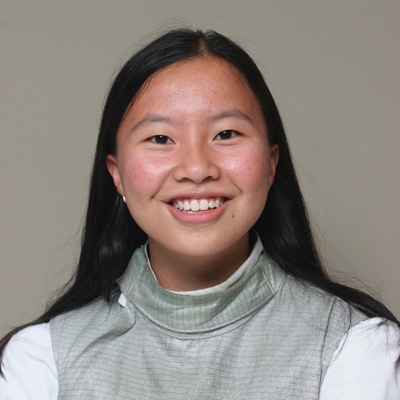 There is a referee, but scoring is left in part to the machines. When one fencer scores a point on another, their suit will light up with either a green or red flash depending on which side of the strip the fencer is on. Bouts last three minutes, or until one fencer gets to five points.

Fencing is an individual sport, but de Laperouse relishes the team aspect of competing for Denison. “There’s a lot of motivation to do my best for my team, because it’s not just for me,” she says. “When you win and have your teammates with you, there’s something about that feeling that’s unmatched by anything else I’ve ever felt before.”