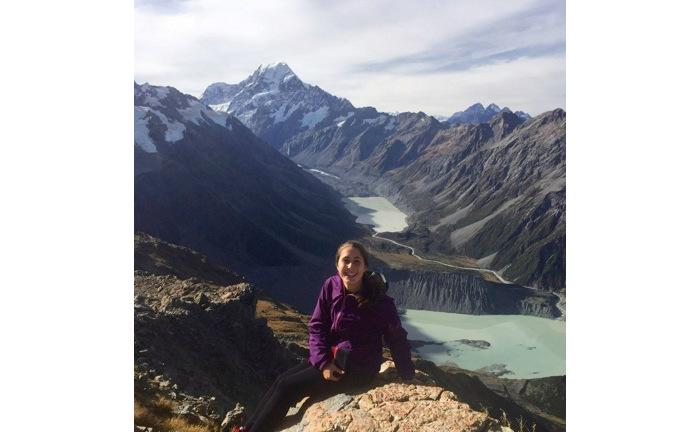 “We hiked through Mueller Hut and we literally scaled an entire mountain, pulling ourselves up over rocks. It was insane, that was such a cool hike.”

“I have to go back. It’s so worth it. It’s expensive to get there, but New Zealand is absolutely incredible, it’ll blow your mind,” Alessandra Cancalosi ‘17 said of her study abroad experience to the University of Otago in Dunedin, New Zealand last spring.

Alessandra is a Denison Senior Environmental Studies and Sociology and Anthropology double major from Oconomowoc, WI. In addition to working with the Green Team sustainability club and performing in an Indonesian music ensemble, Cancalosi is a fellow in the Environmental Studies department. Even with all of this involvement, Cancalosi says that studying abroad was one of the best experiences of her college career.

While surrounded by environmentalists with her peers in the Environmental Studies Department, Cancalosi says that kind of attitude is reflected in society at large in New Zealand.

“A really significant amount of their GDP goes to keeping out invasive animals or species. They make you rinse your shoes if you have hiking boots when you get to the country, which is pretty cool. Everything is like so pristine and so green—there aren’t billboards when you’re driving, which is probably one of the weirdest things to see coming back.”

Cancalosi said that at the attitude that she found with New Zealanders was heartening in the face of environmental issues like global warming and local ecosystem change.

“There’s so much value they put into the national parks that they have. New Zealanders just put so much into the preserving sights and place a lot of importance on conservation. And I think that just that whole sense of that value for the land and their native species was very unique.”

“It’s how they are; it’s just their lifestyle, which is really cool,” Cancalosi said.

Aside from experience the culture, Cancalosi got hands-on experience with environmental science research.

“I was in a 100 level ecology class and we had a weekend lab where we went and collected cockles,” Cancalosi said. Cockles are an edible bivalve commonly found on marine coastlines throughout the world.

“We spent the rest of the semester doing experiments on the cockles and we ended up like testing how much they could filter and how much food that they were eating. When we were done we got to cut them up and look at how many parasites were in them.”

When she wasn’t studying, or spending time with her kiwi host, Cancalosi was exploring the parks of the South Island, including hiking around a glacial lake at Mount Cook.

“We hiked through Mueller Hut and we literally scaled an entire mountain, pulling ourselves up over rocks. It was insane, that was such a cool hike.”

The study abroad experience inspired Cancalosi to make a return trip, she says. “As soon as I left New Zealand I was like, ‘as soon as I graduate, I’m coming back that’s it. There was no doubt in my mind.”