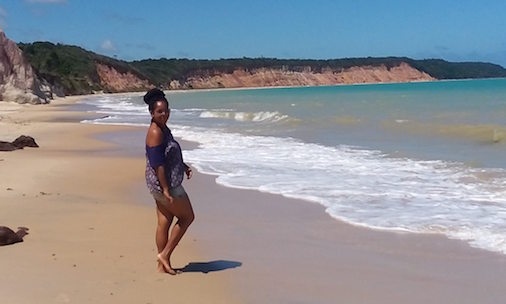 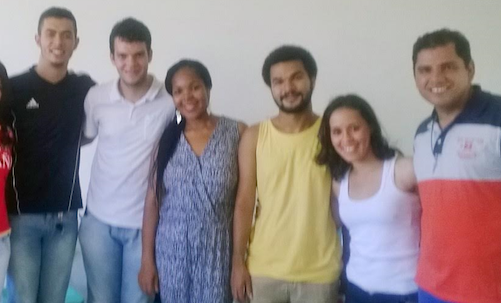 For Michelle Agunloye ’14, her study of Portuguese led to reconnection with her Nigerian roots within the Brazilian culture.

After taking Latin in high school, Michelle Agunloye ’14 wasn't sure what language she wanted to study at Denison. She decided to give Portuguese a try, a decision that would lead her to study and work in Brazil, and to a Fulbright.

“One of the biggest countries to actually speak Portuguese is Brazil. I thought it would be awesome to travel.” Agunloye, who majored in anthropology/sociology, explained. “I wanted to take Portuguese and try something different.”

For her first two and a half years at Denison, she worked hard to learn the language. By autumn of her junior year, Agunloye was pursuing an independent study with Professor Monica Ayala-Martinez in preparation for the following semester she would spend in Brazil.

“Michelle fell in love with Portuguese and with Brazilian culture. This was clear to me given the level of enthusiasm she exhibited in class,” Ayala-Martinez said. “I was always impressed by her maturity, strong will and dedication. Michelle often visited during office hours to ask questions and seek help with grammar, history and culture.”

After completing the Fulbright program, she traveled through Brazil and returned to Chicago, where she began work as an International Student Advisor at Auburn Global.

“In the spring, I was able to study abroad in Salvador Da Bahia, which is in the northeastern region of Brazil. It has one of the largest African populations outside of Africa. I wanted to go there so I could learn more about African culture and how it is tied to Brazilian culture.”

Agunloye is Nigerian, more specifically from the Yoruba region in Nigeria. She discovered that Salvador has one of the largest Yoruba populations outside of Nigeria. “I could feel the connection to my culture,” she said.

In Salvador Da Bahia, Agunloye took courses at the federal university as well as at a private institution in the heart of the city, where she got to learn alongside Brazilian students. She took separate courses through her study abroad program, learning about race, culture and society.

“I was taking classes all over the place! It allowed me to familiarize myself with the city. I ended up being so comfortable that I would walk downtown to my classes. I would walk everywhere.”

She returned to The Hill in Ohio for her senior year, Brazil holding a special place in her heart. “I was sad! I just didn’t want to leave! I felt like I belonged there. I was with my people.”

“Michelle was particularly intrigued by issues of race and the presence of African culture in Brazil,” Ayala-Martinez said. “She came back from Salvador expressing how impactful that experience had been, both at the personal and the academic levels. Given how fulfilling that experience was, Michelle felt compelled to travel back to Brazil and continue the learning process she had started.”

So she did. While researching Afro-Brazilian identity as it relates to Samba music during her senior year, she decided to apply for a Fulbright that would allow her to return to the Northeast region of Brazil.

In January following her graduation, she began teaching English at Universidade Federal de Alagoas in Maceio, Alagoas. In addition to teaching, coordinating English language events outside of the university, Angunloye also volunteered at an all-girl orphanage during her time there.

After completing the Fulbright program, she traveled through Brazil and returned home to Chicago, where she began work as an international student advisor at Auburn Global.

“I wouldn’t have been in Brazil, I wouldn’t have been a Fulbright scholar had I not been at Denison and valued my liberal arts education. I’ve been so blessed to apply what I learned as a student to my work,” Agunloye explained. “Denison is one of those places you know you’ll go back to in your heart.”