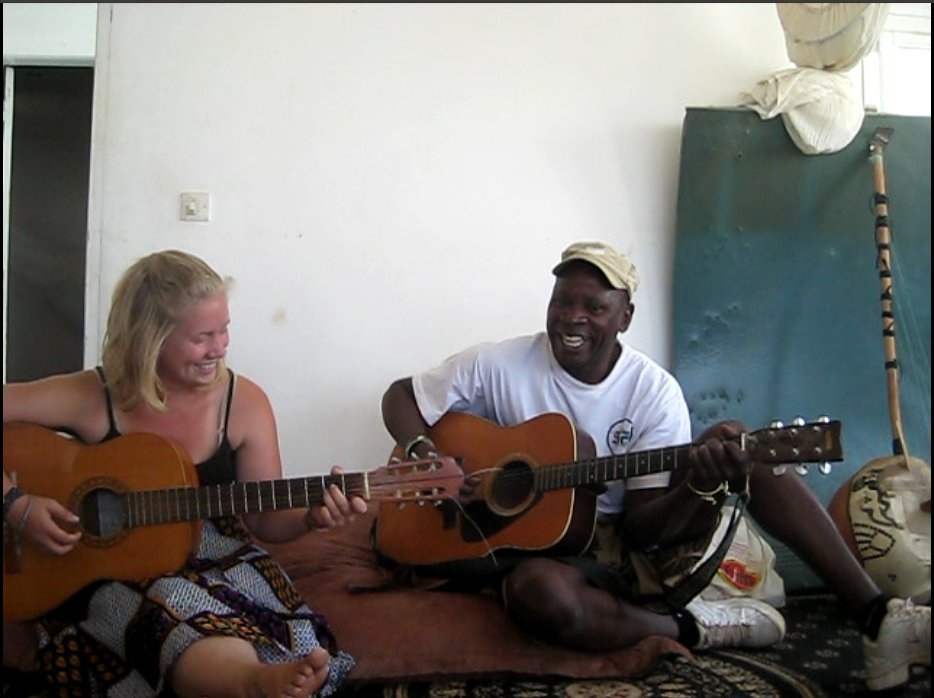 When Alexa Dorris ’12 studied abroad in Senegal, she learned about the dynamic role of music in transformation and healing.

While majoring in psychology and vocal performance at Denison University, I was unsure of the path before me and eager to find deeper meaning in my schoolwork. This questioning led me to study abroad in Senegal, through the School of International Training’s National Identity and the Arts. Its course of study focused on a deeper understanding of this West African country’s rich cultural traditions through classes in history, art, music and dance.

During the final month of the program, for my independent project, I studied voice and kora (West African harp) with an ethnomusicologist named Gaby Ba. In our lessons, I developed an entirely new appreciation of singing.

Gaby helped me move away from my restrictive, self-imposed chains of Western classical singing and invited me to welcome the sounds my voice could make. These lessons were my first experience of the power of voice in therapeutic music. Gaby was also a “music therapist.” He may not have been credentialed, but he was a self-described “music therapist” in Dakar.

Fascinated by Gaby’s stories of his practice, I changed my project so that it became an exploration of the role of therapeutic music in Senegal. We visited a school for children and adults with intellectual disabilities.

Before each class, Gaby described the goals addressed through music. Gaby brought rhythm sticks and a kalimba (thumb piano) to each classroom. He used an energizing opening song. He integrated active music making and dance into an hour-long session in which all of the students were given the opportunity to express themselves through singing, drumming and dance. I remember that his closing music using kalimba and voice was always a meditative, transcendent experience for me.

We continued our music lessons, but we focused on songs that were used for therapeutic purposes. In Senegal, conceptions of mental health and spirituality are often tied. I noticed that therapeutic music experiences were designed to be spiritually important as much as they were designed to address other goals.

To fully understand this integration, Gaby suggested I attend Ndepp, a spiritual ceremony in Senegal that uses music, dance, and ritual sacrifice to bring healing from mental and physical suffering.

I observed a ceremony in a rural village near Mbour, a city north of Dakar. This ceremony was for individuals suffering from physical, mental, or spiritual ailments. Music played an integral role in pleasing the ancestral spirits believed to be responsible for wellness, as well as providing a ritual for welcoming the individual back into the healthy community of villagers.

Experiencing Ndepp was a stunning and influential reminder of the dynamic power of communities and music to promote health.

At the end of my project, I reflected on the many ways in which I had seen music intertwined with healing. My experience mirrored a saying I heard spoken many times in Dakar: “In Senegal, one foot stands in the door of tradition, and the other stands in the door of Western influence.” Gaby used therapeutic music experiences as we might be familiar with them in the West to address nonmusical goals, but they were practiced with deep reverence for the ancestral traditions informing his work.

After my time in Senegal, I knew that music therapy was my calling. In the fall of 2012, I began the Equivalency/Master’s degree program in music therapy at Appalachian State University. I reflected on my time with Gaby in Senegal with the new knowledge I had gained about the field of music therapy. I could now connect what I had learned in my classes to the processes I witnessed in Dakar.

As my academic focus was on the role of music therapy in hospice and palliative care, I again became curious about Senegal. I wondered how music played a role in death and dying.

With IRB approval and an international research grant, I returned to Dakar to conduct interviews with medical professionals, professors of anthropology at Université Cheikh Anta Diop, and a religious leader in Ouakam. I found myself eager to learn all of the meaningful ways that music might play a role in the dying process. My assumption was that in this culture so intimately tied with music tradition, there would certainly be much to uncover. However, I was shocked when my interview questions were met with laughter and dismissal.

I learned very quickly that conceptions of death and dying in the West are very different from those in Senegal. First, the goal of mental health care in Senegal is to integrate the individual harmoniously into the community. Music is seen as a way of forming connection to facilitate this process. In dying, the individual is being welcomed into a new community – either in heaven or with his or her ancestors. Those I interviewed believed this to be a process requiring silence and little intervention from the living.

Second, the majority of the population in Senegal practices Islam. I learned from my interviews that dying individuals are to be comforted only by sacred verse from the Quran.

Finally, health care can be extremely inadequate in Dakar. Families may experience a more frequent and detached relationship with death and grief because it is simply more common to die from illness or injury.

This was a humbling and important research experience for me. On one hand, music is often a universal medium through which we process the universal experiences of life and death. But on the other, the concept of healing and what it means to be in healthy relationship with life and death is so intimately tied with place and culture. I left with deep respect for context and how this informs the dynamic role of music in transformation and healing.

Now in my second year of practice, I continue to be humbled by the important role of culture in our experience of music.

When working with individuals and their families in hospice care, I find that taking a moment to check my assumptions about the role of music in this family’s life can make the difference between providing beautiful music versus providing music experiences that transform the environment in a way that is meaningful to the family. While this is quite different from Gaby’s work with children with intellectual disabilities, I often return to the moments I spent in his classroom feeling a sense of connection with him, the children, and something greater.

It is this sense of meaningful connection that changed my perspective on music and life; and this is what I hope to provide my clients and their families during their time of significant transition.