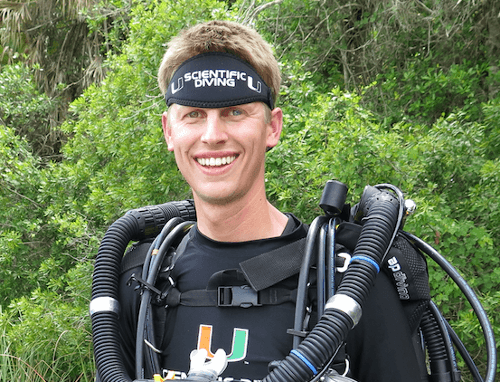 During his semester abroad in South Africa, physics major Robbie Christian ’09 took a class in scuba diving that changed his life course. Christian is now an assistant diving safety officer at the Rosenstiel School of Marine and Atmospheric Science, University of Miami.

There is no question that my study abroad experience changed the course of my life. For me, the opportunities I was exposed to outside of the program and host university made the most direct impact on the direction of my career.

“I arrived in South Africa never having scuba dived in my life and I left 5 months later as a divemaster.”

When choosing a program abroad, many of my classmates got locked into what would best suit their degree, but as a physics major not a single class in my South African program counted toward my degree. Instead, I took care of several general education requirements.

The activities I did there, the friends I met, the photos I took and the food I enjoyed I will never forget. As I tell people regularly, the most impactful semester at Denison was not actually at Denison.

As for how it directly affected my career, I arrived in South Africa never having scuba dived in my life and I left five months later as a divemaster.

Before that semester started, my post-graduation plan was to go into grad school for physics but after I started diving, I resolved to take a year off as a scuba instructor in the South Pacific. When I started back into grad school for marine physics, I was intercepted with a job — I was offered a full-time permanent position as a diving safety officer, training graduate students to be scientific divers.

So, going abroad opened my eyes enough to pursue opportunities that I wasn’t able to easily pursue in Ohio, and one of those opportunities very directly altered the course of my life.

Take away either Denison or my study abroad experience, and I do not believe I would now have my dream job — a job I would never have known existed had it not been for my semester abroad. My advice to everyone is to go. Go anywhere. The experience is worth more than a semester surrounded by your current friends, more than a semester tucked away in your comfort zone, and even more than getting that minor you can only get if you stay at Denison.

Steve Doty, professor of physics, adds his two cents. “Robbie was the fun-but-normal-but-slightly oddball physics major. He was always the student — like many at Denison — that took a different perspective on things. When we would discuss material in class, he would start from the top-level perspective and work his way down to the details. As such, while he was a free spirit, he was always grounded in who and what he was, and how the world around him would fit into that.”

“Robbie also was one that was fearless in trying new things. Putting those together, I'm not at all surprised that his study abroad experience was so positive, nor am I surprised that he has ended up with such an interesting career. At Denison, we have interested and interesting students — who find their success in more ways than we, or they, can imagine. Robbie is a good example of the path-less-traveled-still-works philosophy.”