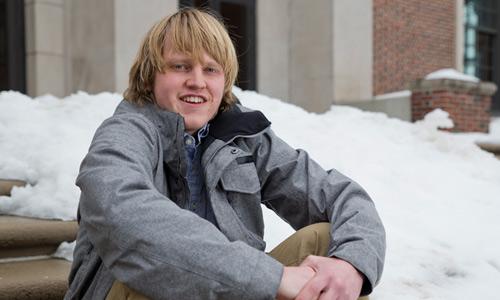 Comparing translations of Freud may lead Kurt Grahnke ’15 to a new career path.

It’s been more than 90 years since Sigmund Freud published “The Ego and the Id,” and scientists today are still learning from this groundbreaking work. Kurt Grahnke ’15, a German major from Oak Park, Ill., spent 10 weeks in the summer of 2013 doing a comparative analysis of the English translations of Freud's work with the original German text, which explores the tensions between the ego, the id and the superego. He became so enamored with his subject that he extended his research in a semester-long directed study with Associate Professor of German Gabriele Dillmann.

The standard text of “The Ego and the Id” is in the original German, and Dillmann was curious about how two English translations, “The Standard Edition,” by James Strachey and the new Penguin Classics edition, affect how Freud's works are understood.

“I was in a room with mental health experts, yet I was the one leading the discussion.”

Grahnke, who is minoring in philosophy, focused on the dichotomy between a humanistic, thought-based approach versus a scientific-thinking approach. He considered the ways in which the German standard and new Penguin Classics English editions contribute to how these methods are projected onto Freud’s work.

Grahnke worked closely with Dillmann throughout his research process. The two met once a week; often they sipped coffee in her garden while they discussed the Freudian texts.

“Professor Dillmann kept me focused and motivated,” he says.

Grahnke presented his findings at the Cincinnati Psychoanalytic Institute in the fall of 2014. As the first undergraduate to present at the Institute, Grahnke felt that all eyes were on him. “I was in a room with mental health experts, yet I was the one leading the discussion,” he said. “It was such an honor.” His paper also was selected for presentation at the National Conference of Undergraduate Research in the spring of 2015.

The project gave Grahnke an unexpected push toward a new goal. His philosophy minor originally focused Grahnke to a thought-based point of view toward his studies. However, he now sees reason in Freud’s own career trajectory from a humanistic-based structure to a natural science framework for his study of the mind.

After graduation, Grahnke plans to attend medical school as a precursor to his desired career in psychiatry or neurology. “I learned so much from this unique experience. Focus on what you love and see what comes of it.”