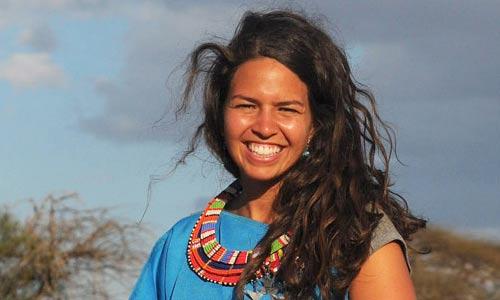 Leela Hazzah ’02 has been nominated as a 2014 CNN Hero for her work as founder and executive director of the Lion Guardians program in East Africa.

It has been more than a decade since Hazzah took up her mission. In 2005, while she was conducting research for her master’s degree (and living in a tree house in Kenya), she was inspired to develop the Lion Guardian philosophy with the local Maasai community. Its purpose is to conserve lions and preserve cultures by promoting “sustainable coexistence between people and lions using cultural values, community participation and science.”

According to the Lion Guardian website, more than 70 Lion Guardian conservationists, biologists and local leaders work in collaboration with communities to protect lions across more than one million acres of prime lion habitat in Kenya and Tanzania. They reduce conflict between people and lions, generate scientific data and knowledge about species conversation, and reinforce the cultural role and values of warriors within pastoralist communities.

I know we’re making a difference. When I first moved here, I never heard lions roaring. But now I hear lions roaring all the time.

According to the Cable News Network, “Hazzah realized that Maasai warriors, the leaders and protectors in their community, would be the best ambassadors for lions. She began teaching them the benefits of protecting lions, with an emphasis on preserving their culture. In turn, the lessons began rippling through the entire tribe.”

“Maasai have a very close-knit relationship with lions. It's very much a love-and-hate relationship,’ Hazzah told CNN. “They dislike them because they eat their livestock, but they also admire them tremendously because they are just beautiful animals.”

And the program is working. “I know we’re making a difference,” Hazzah said. “When I first moved here, I never heard lions roaring. But now I hear lions roaring all the time.”

After graduating from Denison with a bachelor’s degree in biology, Hazzah earned a master’s and Ph.D. in conservation biology from the University of Wisconsin-Madison. She has been awarded the Future for Nature Award, Young Women Conservation Biology Award (Society of Conservation Biology), Fulbright-Hays Doctoral Fellowships, Wings WorldQuest Research Award, two Foreign Language and Area Studies Fellowships, Lawry-Leopold Fellowship, a Jordan Prize for African Studies, and numerous Panthera Kaplan Graduate Awards.

To read the CNN story, go to cnn.com.

To learn more about the Lion Guardians, visit lionguardians.org