A Man of His Words 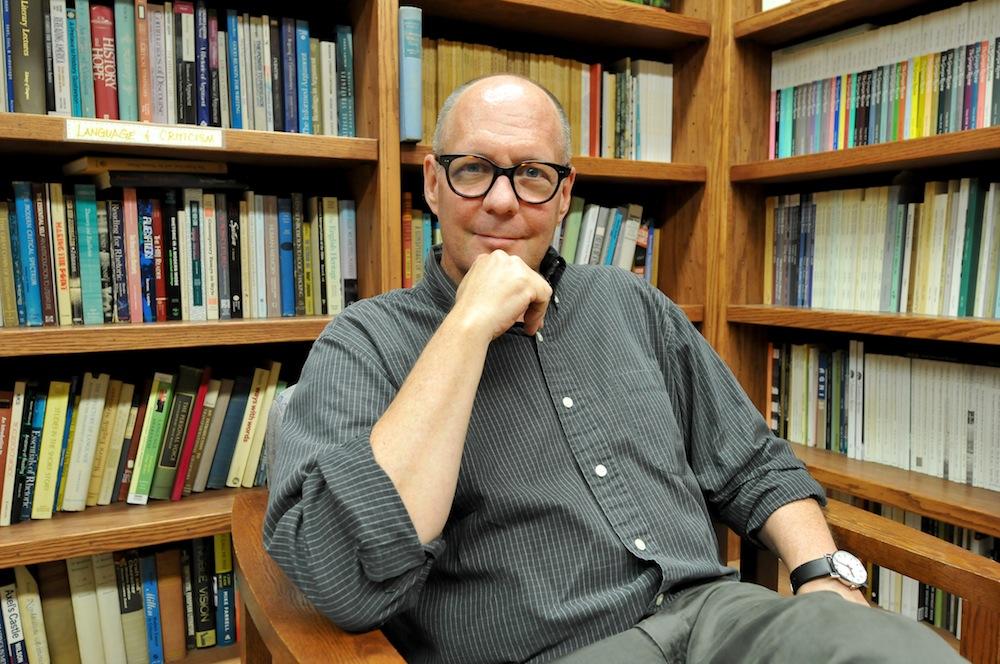 It is “the real nuts and bolts of working on something from the inside together,” says English professor David Baker. “It’s intense, very intense, but that’s what’s remarkable about it—and students really learn how to write.”

On Tuesday evenings, you can find Professor David Baker in Barney-Davis Hall, “workshopping” poems with his students in English 385: Poetry Writing. These workshops aren’t like other forms of teaching. The three-hour-long sessions are mini-marathons of constructive criticism. And if that sounds as if it might be daunting for the writers, it probably is. But it’s also a unique opportunity to have other people delve deeply and thoughtfully into each student’s work.

“Nothing’s finished here, or pinned down,” says Baker. “The text isn’t a final thing; it’s ongoing, and our whole group has the responsibility and pleasure of participating in writing that piece, to be part of something that’s still being made.”

Baker knows a thing or two about the process. He’s the author of 10 books of poetry, most recently Never-Ending Birds, which won the Theodore Roethke Memorial Poetry Prize, and four prose books on the study of poetry. His work has appeared in such magazines as American Poetry Review, The Atlantic Monthly, The Nation, The New Republic, The New Yorker, The Paris Review, Poetry, Slate, The Yale Review, and more than 100 others. He has received fellowships and awards from the John Simon Guggenheim Memorial Foundation, the National Endowment for the Arts, the Poetry Society of America, the Ohio Arts Council, and the Society of Midland Authors.

“What we’ve done is to help her think of how she might enter the poem and how she might revise it—that’s a workshop—the real nuts and bolts of working on something from the inside together. It’s intense, very intense, but that’s what’s remarkable about it—and students really learn how to write.”

“The poem is our text,” says Baker. “And we talk about everything: the different ways we have of reading it; what we think it means and how it works; its political, regional and personal contexts; how it relates to other poems; the reasons we each think it’s succeeding; and where it isn’t succeeding.”

The group works with five or six poems, and then gives the information to the writer. But not, Baker emphasizes, so that she can incorporate all of the feedback. The writer chooses the comments that matter to her and uses them in completing her poem.

“What we’ve done is to help her think of how she might enter the poem and how she might revise it—that’s a workshop—the real nuts and bolts of working on something from the inside together. It’s intense, very intense, but that’s what’s remarkable about it—and students really learn how to write.”

The rigor of these workshops also helps Baker shape his own poems. While he can easily see what to do with other people’s writing, it’s far more difficult to achieve that objectivity with his own work.

“From having taught creative writing for a long time, I’ve been able to find in my own poems things that are wrong. Clichés, idioms, the things that I think are nifty. When I see them happen in other poems, it helps me identify those same issues in mine.”

Baker believes that poetry is important to students—but also to society. When there are few avenues for freedom of expression, poetry becomes even more important to cultures. He’s seen that poetry is stretching its wings, becoming more complicated and avant-garde, and sometimes hopeful. And all the new media that people have available to them, such as the Twitter and Facebook, have given birth to new forms of poetry.

“A friend of mine has put together a form of a poem that works only on Twitter. These things spread like crazy across regional, national, and linguistic boundaries.

“Poetry is like music and like dance and like theatre and like painting all at once. I don’t know of any other art that contains all the other arts like poetry does. Poetry requires a musical ear and a physical imagination and a performative sense and a linguistic sense—that’s why I do it.”