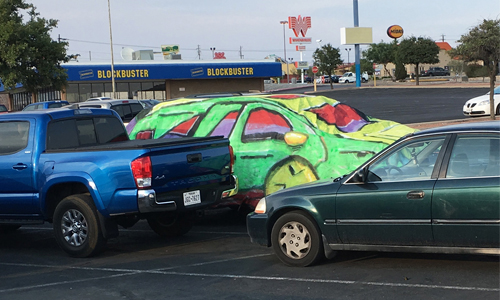 The Global Studies Seminar welcomes Keith Spencer, assistant professor of studio art, presenting “Find the 2 and you will be kissed tomorrow. 55555555: A Car Show.”

Six paintings on car covers promote US/Mexican border culture by subverting conventional art making ideas through rogue exhibits. The painted covers were initially created and draped over vehicles in El Paso, Texas and later in central Ohio. Each painted piece was inspired by border wanderings, car club meet-ups, late night cruisers, and visiting custom auto body shops. Exhibitions were used to combat misconceptions about the region which have been increasingly sensationalized by the rhetoric of our current presidential administration. Unexpected and unsolicited public encounters between the artworks and viewers aspire to provoke curiosity, discussion, and impact change.

The works represent lives hedged between two worlds: the abstract and recognizable, 2D and 3D, art and utility, Spanish and English, tomayto and tomahto. The presented pieces are neither one thing or the other, not truly this or that, but this AND that. Unclear definitions, unrecognizable forms and foreign bodies can activate insecurities or even fear; yet, through nervous laughter, this project instills hybridization as a positive, letting passersby question their place in relation to the works, perceptual and/or otherwise, mid-giggle. The goal is to embrace ambiguity, to wonder, probe freely, imagine, resist and rebel – illuminating productive spaces situated between belief and disbelief.