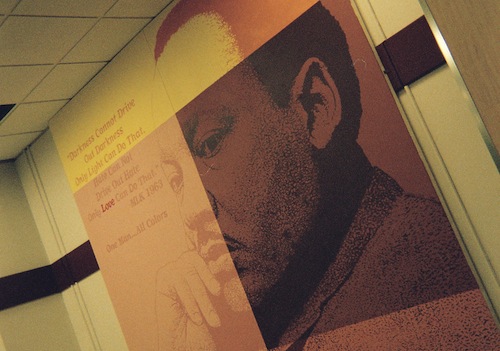 At Denison, we do a lot of things not as an “institution,” but as a “community.” Institutions are inanimate entities that don't really observe or celebrate anything, but communities are made up of living, breathing people in relationship with one another. It's in the Denison community that our observation of the birth date, life, and legacy of the Rev. Dr. Martin Luther King Jr. resides.

We commemorate Dr. King for the same reason as other communities across the land.  We remember the Civil Rights Movement of the 1950s and '60s of which King was such a part, using it as a launching pad to consider the legacy of racial discrimination that preceded it, the courage of those who stood up to attack it, the progress that the nation achieved through it, and the unfinished work in the pursuit of equal rights for all persons that continues to this day. We remember Dr. King himself, the courage of his leadership, and the majesty of his vision and the artful articulation of it.

As an educational community, however, we commemorate Dr. King in ways that go beyond the observances of towns and cities across the country. King was himself an educated man and he talked often and persuasively about education as the way for all persons to achieve their potential and for men and women alike to overcome their preconceptions and biases. As a college, we have a special stake in the value of education, and by commemorating King, we affirm that value.

In Denison tradition, we dedicated our day to the celebration of Martin Luther King Jr.

MLK keynote speaker explores King’s question: “How shall we live?” amid the polarization of our postmodern era.

The 2021 Martin Luther King Jr. events at Denison celebrate the life and legacy of the civil rights leader.