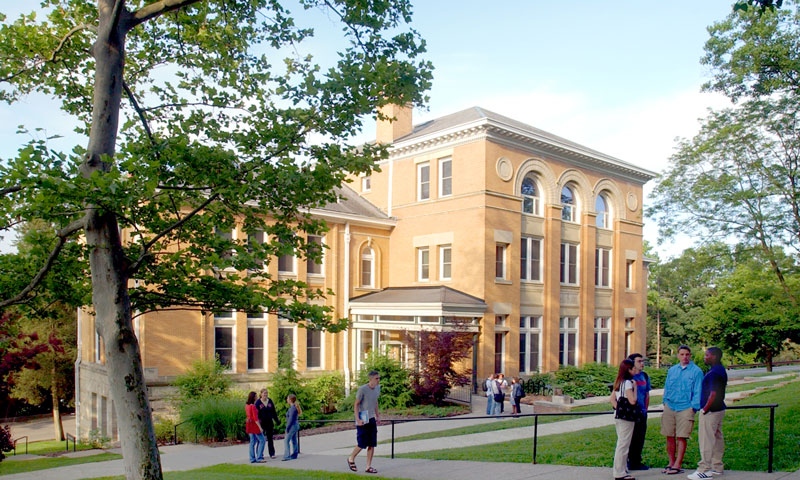 A study indicates that Denison has a positive economic impact on Granville and Licking County.

Denison University recently conducted a study on the economic impact of the college on Granville and Licking County, and the results may be surprising, according to David English, the college’s vice president of finance and management.

“Denison employs almost 800 people, and we are a top-100 private employer in Central Ohio. We were interested in quantifying the economic impact of the college on our community. We’ve been pleasantly surprised at the numbers,” said English.

“To a real extent, Denison thrives very much thanks to Granville and Licking County, their businesses and their people – and we are keenly aware of that,” he added. “The health of the college is tied very closely to the health of the area, and we try very hard to be good community partners. As a result, we sometimes end up learning new skills ‑ like inn-keeping and golf-course management – that are outside our usual sphere.”

The study indicates that the college’s economic impact on Granville and Licking County neighbors rises from three primary sources:

Second, capital investment: In addition to operating expenses, significant amounts are reinvested in equipment and physical infrastructure, which, as much as possible, are sourced locally. These investments in land, buildings, and equipment are substantial and generate revenue for local business, which in turn, supports local employment. One example is the new Michael D. Eisner Center for the Performing Arts, which began construction in March 2017.

Third, ancillary spending: Denison attracts students, parents, visitors of students, visiting prospective students from all over the country, as well as attendees for athletics events and concerts. These visitors patronize local hotels, restaurants, shops and gas stations; and this in turn supports local job creation.

“Denison employs almost 800 people, and we are a top-100 private employer in Central Ohio.”

A multiplier effect established by the Bureau of Economic Analysis, RIMS II, was applied to these three figures in the research. Three primary sources of economic impact and their total effect on our economy, using the RIMS methodology, follow.

Denison’s average annual operating expenditures, adjusted to 2010 dollars over the past seven years, are about $106,700,000. Applying the valued-added multiplier determines that each year the college generates about $176 million in total expenditures, which in turn supports $59.5 million in household earnings and about 2,300 jobs, as well as $112.8 million in Gross Domestic Product (GDP) within Licking County.

The average capital investment over the past seven years, adjusted to 2010 dollars, is about $17,700,000. The multiplier effect indicates that through this capital reinvestment, Denison generates $23.4 million in total sales, $1.5 million in household earnings, and support 64 jobs, as well as $15.8 million in GDP within Licking County. This does not include the economic impact of the new Michael D. Eisner Center for the Performing Arts.

Denison conservatively calculated ancillary spending by estimating monies spent by prospective students and parents, current students and visiting parents, over one year. Move-in Weekend, Big Red Weekend, Commencement and campus events, like concerts, sports events and arts events were considered. Reunion Weekend, which generally brings more than 1,000 alumni back to town, was not included, nor was the effect of parents picking up and dropping off their students during breaks.

“Quite frankly, I’m very proud of Denison’s overwhelmingly positive economic benefit to our friends and neighbors in Granville and Licking County,” said English. “All this happens because of our strong and healthy town and gown partnership. We couldn’t do the good work of educating our students without our neighbors as friends, arts appreciators, sports enthusiasts, and community-minded partners.”

To read the complete study: https://denison.edu/forms/economic-impact-of-denison-on-licking-county