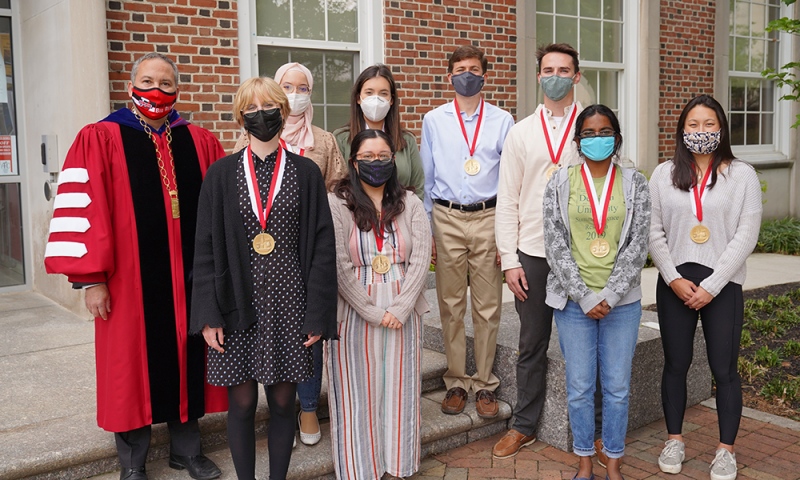 Sara, in the journey of exploration that is the college experience for most students, you have shared on stage and in person, in Columbus and here on campus, “A Map of Myself.” From Thurber House to the Columbus Museum of Art to the Riffe Center, you have shared a story from your childhood in Damascus, Syria to this country in a personal style that brings the listener on that refugee journey, which you subtitled “My Odyssey to America.” Your nominators made it clear that you have exemplified what it means to move out of one’s comfort zone, and to be engaged with the community around you in ways that challenge us all to consider where we’ve been and where we’re going. In poetry, in history, in economics and in leadership, you have been a student who not only stands out, but your teachers all note how you have a gift for bringing other students out with you into new places of self-understanding and global discovery. You listen well along with speaking powerfully, and one of your professors noted that you are both a thinker and a doer. It is that sort of combination of both reflection and action, personal experience, and liberal arts education, that makes you an absolutely necessary part of our President’s Medalist class for 2021.

When you are editor-in-chief of the Denisonian you become known all over campus, which can be a mixed blessing at times, responsible for more perspectives than you bargained for at first. But when your professors learn you can help them master balky technology, or simply need someone to help them stop getting in their own way while working with remote learning, you can find yourself more popular than you originally intended. A truly exceptional situation, though, is to be a summer intern in the campus Investment Office, and quickly become seen as indispensable to their work. Your ability to bridge electronic tools to educational goals, while always being a caring and compassionate presence in doing so, has led many faculty and staff to commend you for this award. Innovation and improvisation have been watchwords for us all this past year, but you were developing a reputation for those gifts even before we’d heard of COVID. In Global Commerce, with the Knowlton Center and the Red Frame Lab, your gifts for creating community while pursuing complex inquiries have created for you a place in this year’s President’s Medalist class.

At Denison, it is not entirely unusual for a student to be praised for being able to “synthesize broad theoretical concepts.” And having the ability to communicate those concepts through good writing is part of what the university tries to develop in every student. What made your nomination stand out, Maddie, was the way so many faculty noted both your breadth and focus; your ability to be comprehensive in your academic scope, yet to stay tightly in analysis down to essential details … and for those gifts to be shown both on the page in composition and in your use of vocal performance as a means of self-expression and academic achievement. Perhaps more importantly in the difficult times we’ve all worked through, you used musical theatre as a way to bring students together even when we had to be apart, from parking garages and tennis courts for practices to the campus football field for performances, to give us a chance to let music bring us together across wider distances than usual. And we cannot award you as a President’s Medalist without noting your internship in Bath, England at “Mr. B’s Emporium of Reading Delights,” which I suspect now is on all of our bucket lists as a bookstore we need to visit someday.

Your nominators said, “if we had the magical power to conjure a human being that exemplified Denison’s mission statement, that person would be Jackie.” They tell us that your input and contributions stand out “with their insightfulness, clarity, and depth.” You not only master your course material, you help your peers understand better what the class is engaged in, and add to every discussion of which you are a part. This is a gift that you have made use of on campus, and also in your work extending the campus reach through service as a research assistant which takes the Denison experience beyond the traditional classroom. Your summer work in Columbus took knowledge and understandings you have gained and refined here on the hill and carried them into significant impacts in our neighboring communities, even through the uncertainty of a pandemic period of operation. You have been lead executive team member for Sisters in Dialogue here on campus, growing from membership to leadership into mentorship of new leaders in that organization, imparting momentum both to the group and its goals of supporting campus diversity and student success.

Jacob, one of your professors says that you provide a “truly outstanding, peerless model in developing [your] career interests.” From the state of Maryland’s legislature, to the United States Congress, and even for a Scottish Member of Parliament: you have gotten deeply and directly involved in government, politics, and health policy. That big picture participation is complemented by your impressive efforts on direct engagement with student voters, to get them to the polls and make sure they arrive informed, equipped, and aware of the stakes involved for all citizens. Here on campus, you’ve been called “a stellar student” and “a team player,” that combination which is central to what we mean when we talk about President’s Medalists. You’ve worked through injuries on the cross country/track & field team to become a team captain, and your appreciation for the importance of endurance, and for getting everyone across the finish line, carries over into how you’ve both studied and gotten into the practice of public policy, with a passion for health advocacy that literally extends across an ocean.

Shruti, while your nominators note how you are an A+ scholar, they highlight how when everyone else is in a state of panic, you know how to be a calm, centered presence. Their praise is for how you are there for everyone else in the classroom and at evaluation time, helping others set up and being present for people when the hard parts need to be unpacked. You have exemplified the Denison commitment to “working and communicating across differences” in so many interactions, both on and around as well as off-campus. Artistic excellence along with humane understanding have made you a valued part of the Studio Arts and Creative Connection community, which are already missing you. During the period of remote learning which challenged us all, you found ways to use the necessities of online communication to include communities in India who might be overlooked there, in person, but whose struggles as migrants you engaged with and supported from here in Ohio. Not only our campus, but our world is better for your having been a student at Denison, and why we present you with the President’s Medalist award.

Scoring a 69 in 18 holes of golf not only is a Denison single-round scoring record, but Megan, it might itself be grounds for a President’s Medalist award. Beyond any one match, though, is the fact that you have been an All-American Scholar in Varsity Women’s Golf all four years of your college career. Our campus Director of Athletics says without hesitation that you symbolize “all that is right and thriving in Denison Athletics.” In Biochemistry, you have done research with Nationwide Children’s Hospital, along with excelling in your course and lab assignments; so much so that our Department of Chemistry and Biochemistry has named you a Department Senior Fellow. As a lab assistant, summer researcher, and teaching assistant through the pandemic, you have been a vital player in reimagining what it means to be part of a learning community, when in-person support and guidance has to happen through other means. At the same time, you were attentive and conscientious with those matters that still have to be in-person, like tending tanks of sea urchins and mixing up batches of artificial seawater. One of your nominators said you are “a model of competence and excellence.”

Fatimah, as a major in French and International Studies, it stands to reason that you would have a special interest and awareness not just of France, but in places like Quebec and Haiti, where “la langue de Molière” is spoken daily. What even many Denison students may not realize is how much of the Arab world speaks French on a regular basis. As one of your nominators said, you possess a “deep understanding and practice of cultural empathy.” They go on to say of you, “As an Arab-Polish-American, she embodies hyphenated identities and celebrates cross cultural communication.” So you have participated as a student interviewer in a digital oral history project for Central Ohio’s Arab American Community, learning more about the Arab World, and have been actively involved as a leader in the Denison Muslim Student Association. Beyond academics, your engagement on campus has been broad and far-reaching, from student government, to the Office of Admission and the First-Generation Network. Along with those personal involvements, you have been a tireless and uplifting leader in what we might call a paradigmatic activity of this past year, facilitating weekly group discussions through video conference technology, designed to allow students to practice French outside of the classroom, leading to the obvious question, how do you say “Zoom” in French?