'I just write me' 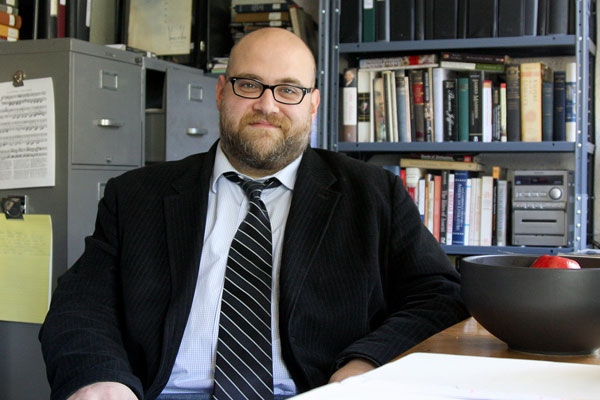 Mark Evans Bryan, an associate professor of theatre at Denison and member of the Class of ’96, has a new play that has been getting attention on three continents.

It seems fitting, since creating this particular piece was a bit foreign to this veteran playwright. When Sue Ott Rowlands, actress and dean of Virginia Tech’s College of Liberal Arts and Human Sciences, initially approached Bryan about writing her a one-woman show, she told him she wanted it to be breezy. For Bryan — an experienced playwright with Mercury Seven with Signs Following to his credit — the prospect of writing breezy was more daunting than writing in a woman’s perspective.

“Everything I write is bleak,” he explained. “I like finding beauty in representations of sadness.”

The final product, fig. 1, is somewhere between Bryan’s writing style and Ott Rowlands’ request. Based on Anton Chekhov’s short story “The Kiss,” the play depicts a single woman in her 50s who is a dean of a college along the mid-Atlantic coast.

Bryan, 36, found it even more difficult to write in a voice older than his own. “It’s really hard to imagine experience,” he said, “especially experience that makes you learn through loss or sadness…I know what having a little bit of wisdom is [from being in my mid-30s], but I don’t know what having wisdom is.”

When Bryan had finished writing in 2009, he gave the script to Ott Rowlands and director Bruce Hermann. Although he was initially around for consultations on the text in the first week of rehearsals, Bryan did not see the complete work until months later, in performances on the other side of the pond.

Fig. 1 was staged at the Prague Fringe Festival in June, and received excellent reviews in both Czech and English-language Prague newspapers, the Pravo and the Prague Post. Fringe festivals consistently showcase artistic experimentation and new work, and provide an event for creative people to gather.

“You end up meeting other artists and people from around the world,” said Bryan. Because of such contacts, fig. 1 will not only be performed in Toledo this fall, but in Chile in November, and throughout the United Kingdom beginning in March.

Having spent months writing this play and seeing it praised in Europe, Bryan is nevertheless modest about his skill with narrative monologue.