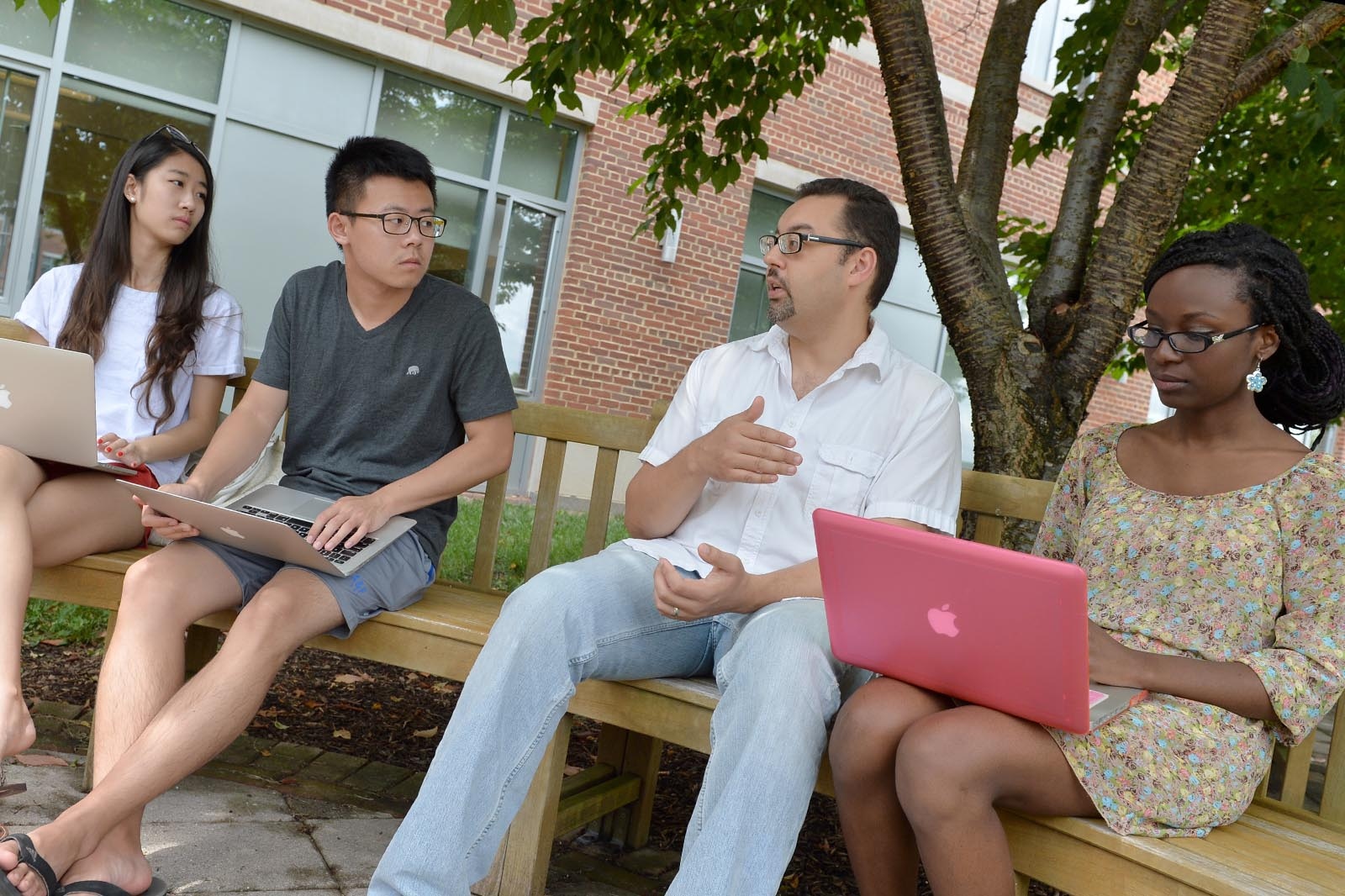 When it comes to solving national and international problems, researchers often must ask: Is this something that can actually be fixed?

Because, let’s face it, we would all love to live in a world where nobody gets sick, hurricanes never come to shore, and everyone has a job, but that doesn’t make these desires realistic, right?

While we can’t do much about the common cold (yet) or the weather, Economics Professor Fadhel Kaboub and his trio of Bowen Summer Scholars have spent the last 10 weeks probing the line between myth and reality in the world of economics and unemployment rates. The work of all three students is made possible by an endowed fund from the Andrew W. Mellon Foundation named for Bill and Mary Ellen Bowen, both class of ’55.

Contrary to what some might think, full employment, according to Kaboub, Frances Osei-Bonsu ’15, Yue “Lucy” Yang ’16, and Hongfei Li ’17, is possible if the government functions as the “Employer of Last Resort” (ELR).

Contrary to what some might think, full employment is possible if the government functions as the Employer of Last Resort.

According to this philosophy, if citizens are capable of work, the government can equip and compensate them appropriately. “We are trying to show that the system will not naturally provide enough employment opportunities, but if we rethink the way we approach economic policy, there is a way to provide employment to anyone who is ready, willing, and able to work,” says Kaboub.

The most popular American example of this type of program is the New Deal, President Franklin Roosevelt’s series of laws and programs that helped to guide the country out of the Great Depression that lasted for 10 years starting in 1929. As a part of the New Deal, FDR and the federal government provided jobs to the American people that also benefited the public, such as building roads, planting trees, and creating dams that brought hydroelectric power to rural areas.

Osei-Bonsu, Yang, and Li, are interested in what it would be like to implement similar programs in Ghana, Saudi Arabia, and China. In addition to creating case studies for each country, the group is working to compare and contrast their plans, demonstrating the individualized economic needs for each area. “We’re challenging the cookie cutter approach to economics,” says Kaboub.

Ghana, an African country liberated in 1957, holds considerable debt and exports mainly cocoa and gold, while Saudi Arabia doesn’t have any financial challenges because of its revenue from oil exports. However, it is faced with massive labor market challenges because the skills provided by the education system do not match what the private sector wants or needs to produce the oil. China is in a completely different situation. It has a very successful economic system based on exports, but has increasing inequalities between urban and rural areas in terms of access to employment.

The globally focused project is specifically meaningful to the three international students. Both Osei-Bonsu and Li are studying their home countries of Ghana and China, while Yang (also from China) is studying Saudi Arabia at the request of Kaboub, who specializes in the Middle Eastern economics.

While the case studies are highly individualized, the project is collaborative at heart. “To me, the most interesting part is how different people approach the same question,” says Yang, a double economics and math major from Xi’an, China. “We approach the same topic in different ways, and we have different understandings of the problem. It is also helpful because you can listen (in our weekly meetings) to the analysis of another country you are not familiar with.”

Kaboub hopes one day to teach a class formatted in a similar manner — with small groups of students developing proposals for ELR programs in developing countries.

“The interesting thing for me, beyond the project, is working with three different students — a rising senior, a rising junior, and a rising sophomore. I’m intrigued by the transmission mechanism and knowledge between different classes and what a team project can do in terms of teaching students from different levels. That’s kind of my own hidden summer project.”