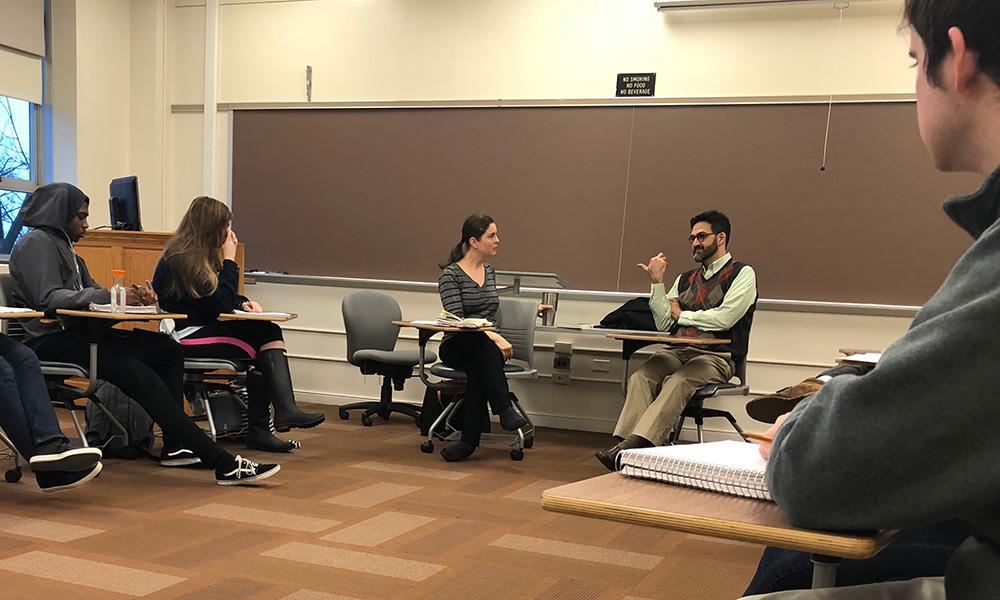 Kambiz GhaneaBassiri - a professor of religion from Reed College in Portland, Ore. - came to campus in the spring of 2018 under the auspices of the Goodspeed Lecture Series.

I had the pleasure of being in Dr. GhaneaBassiri’s company, as he introduced himself to the myriad of students and professors over grilled mushroom caps, quinoa and spinach salad, and chicken breasts. This dinner was a wonderful appetizer to his talk, “Religion and State in Contemporary Politics of Muslim America,” later that evening.

That night, students and professors from many different majors gathered in the Burton Morgan lecture hall to hear GhaneaBassiri. Main themes of the talk included American exceptionalism, the constructed identity of Muslim America, and how Muslims have been included or excluded from contemporary American politics. His lecture was interesting and eye-opening; he provided meaningful examples and tools for analyzing the current political moment.

He played clips from former presidents’ speeches, as he analyzed the ways in which these presidents have constructed, interacted with, or evoked Muslim America. He considered the ways that Muslim Americans have been instrumentalized during elections or contemporary politics in the past, then compared it to the blatant white supremacy found in President Trump’s speeches and politics.

The next morning, GhaneaBassiri was a guest lecturer in Prof. Claire Robison’s “Islam and Gender” class. (He also lectured in Prof. Marty Roberts’ “Race, Ethnicity and Religion in the US.”) After reading one of his articles earlier that week and allowing his talk the night prior to marinate in my thoughts, this was a wonderful opportunity to ask him questions. Ranging from the importance of mosques and Islamic Community Centers to the meaning of memes in contemporary American cultural language, the discussion was fruitful, engaging, and interesting.

Dr. GhaneaBassiri used both an academic and a personal lens to answer some more nuanced questions, which contributed to the quality of the class conversation. He provided illustrative examples and was thorough when answering any questions-having him in class was an immense pleasure.