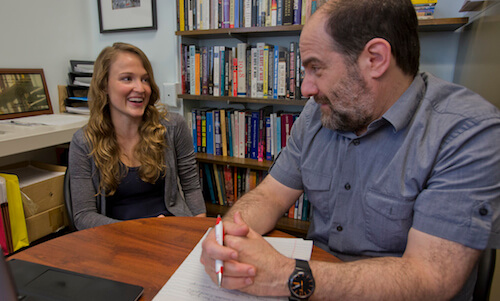 A path to working past differences: engage with each other’s ideas.

Lindsey Studebaker ’16 is a political science major from Mt. Vernon, Ohio, and a member of the Lugar Program in Politics and Public Service and the Denison cross country and track programs. After graduation she will begin her career at the Department of Justice in Washington, D.C.

In April 2016, former Senator Richard Lugar ’54 (R) of Indiana and former Senator Bob Graham (D) of Florida presented the keynote for the Denison University Lugar Symposium on “Political Polarization,” which was followed by an invitation-only dinner. The next day, a full schedule of panel discussions under the topic took place, with regard to U.S domestic and foreign policies. Studebaker took part in all the events. Here she chronicles her experience, beginning with the formal dinner.

As I sat down at my table, I distinctively remember looking around the room in amazement at how many respected experts were present at the event. Perhaps I was experiencing a touch of imposter syndrome, but I was beginning to feel pretty intimidated at the prospect of making dinner conversation with individuals who authored the books I’d been citing in my papers for the past four years.

As a student at Denison University, I have seen firsthand the benefits of deliberation between students — our campus is a diverse place not without its fair share of controversy.

However as the guests took their seats and dinner was served, I was surprised at how easily the conversation flowed between the seven strangers sitting at the table. By the end of the night, I felt as though I had new acquaintances in the distinguished professionals and professors I was seated with, and I left feeling both inspired and excited for the next day.

As the symposium resumed the next morning, panels of American political scientists presented their ideas and research about polarization. After a break for lunch, Washington professionals shared their views on polarization from inside the political system, followed by presentations from scholars of international politics. Each presenter had a different take on the causes and effects of polarization and an opinion as to whether or not there was a remedy for the current state of American democracy.

While I listened to each of these experts contribute their insights, I was struck by how eloquently they were able to contradict one another’s research. In spite of the considerable amounts of talent and success in the room, these individuals all addressed one another with respect and civility, even when some their ideas and findings clashed significantly.

Perhaps what was the most impressive was the role Senator Lugar played throughout the day, diplomatically fielding questions from individuals who both agreed and disagreed with his approach to combating polarization.

As the end of the conversation drew near, one of the visiting professors bluntly asked the group to address what she described as being the 800 pound gorilla in the room: the public. While each presenter had a unique insight as to how to address the issue of polarization within Congress, most had neglected to talk about what could be done to lessen the effects of polarization between Americans. Much to the surprise of everyone in attendance, the room fell silent for the first time that day, as everyone contemplated the answer to this question.

Not wanting to seem like the arrogant millennial in the room — and perhaps I was still a little star-struck from being in the presence of so many accomplished individuals — I didn’t vocalize what I was thinking at that moment, but this is a question for which I am confident there is a definitive answer. Just as I had witnessed the academics and professionals do in the symposium, and just as Senator Lugar encourages elected officials to do, the American people need to engage with each other’s ideas.

As a student at Denison University, I have seen firsthand the benefits of deliberation between students — our campus is a diverse place not without its fair share of controversy. While at times throughout my past four years here, our differences have been more pronounced than at others, through respectful engagement and dialogue I have witnessed my peers process some of the most difficult and controversial topics arising on college campuses today. This is not to say that our campus does not still deal with these issues, but we have not let the things that divide us socially or politically keep us from remaining a united Denison community.

In more ways than one, Denison and other universities can be seen as small microcosms of democracy where societal tensions and movements collide as people from all walks of life converge in our classrooms and libraries.

I would argue that if college students can successfully utilize deliberation as a means for alleviating issues in our culture, there is no reason why ordinary citizens wouldn’t be able to, as well. The key for mitigating the differences that arise in any democracy lies not in extinguishing controversy but by capitalizing on the breadth of opinions a diverse nation, like our own, has to offer, in order to arrive at the best possible solutions.

While it is easy to look at the current state of our national politics and feel discouraged, I left the Lugar Symposium feeling optimistic and hopeful about the ways in which Denison graduates will continue to rise to meet the challenges of living in a democratic society.