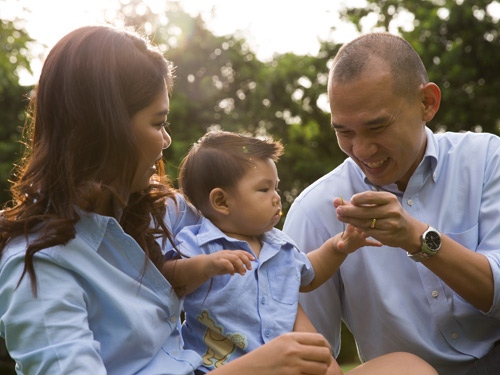 Starting with his off-campus study in Hong Kong, Paul Henderson ’97 has spent his post-grad years in Asia, delving into different echelons of education.

While Denison has recently been recognized for its depth of diversity, this trait is not a new one. In fact, the variety of cultures, classes, theology and academics is what piqued the interest of Paul Henderson ’97.

“I loved my childhood. It was like the movies: driving a car, dating, having fun. But it wasn’t very diverse,” says Henderson, a political science major from Park Ridge, Ill. “Denison offered exciting new fields of study.”

At Denison, Henderson explored his heritage through an East Asian studies minor. This set him on a track toward his current job as the head of the Lower School at the Thai-Chinese International School in Bangkok, Thailand.

Like more than half of Denison’s current student body, Henderson studied abroad during his junior year. A trip to Hong Kong introduced him to life overseas, and he couldn’t get enough.

After graduation, Henderson went immediately to China, where he taught English in Chengdu City in the Sichuan Province for a year.

“This was 1997, and it was the Wild West,” says Henderson. “I had a bicycle and we boiled water on the roof of the apartment building. The biggest challenge was keeping air in the tires.”

After a year of teaching English at the Sichuan Union University, Henderson moved to Taipei, Taiwan, where he spent another two years teaching English and decided to become a social studies teacher like one of his favorite professors, Barry Keenan, emeriti faculty member of the history department.

“When Paul Henderson ’97 was looking at colleges, it was Denison’s variety of cultures, classes, theology and academics that piqued his interest.”

Henderson then moved back to Chicago to obtain his master in education at DePaul University while working as a manager for after-school programs and grant application writer/manager for the Chicago Department of Human Services.

As a part of this graduate program, Henderson was able to leave his job and student-teach abroad. Once again he returned to Asia, this time to an international school in Hanoi, Vietnam.

“I knew I wanted to go to Asia; the school in Hanoi just happened to be one of the places that accepted me. During that year, however, I discovered that I really loved the culture there,” says Henderson.

So, with one semester left in graduate school, Henderson knew three things: he needed a job; he loved Southeast Asia’s culture; and he was passionate about his background in China.

This all led him to his current employer, the Thai-Chinese International School.

“I guess it was before Google, so I Yahoo-ed it and found the job posted online,” laughed Henderson, who was hired as a history and social studies teacher. “I wanted to be like Barry Keenan and teach Chinese history in a fun way. So I got to be a history teacher, which was the goal.”

Now entering his 11th year at TCIS, Henderson has held several positions at this school, slowly moving into an administrative role. According to him, about half of the population of TCIS is Thai, the other half is of various Chinese backgrounds, mostly Taiwanese, and there are a few other nationalities such as Korean, Japanese, American and Canadian.

Henderson credits Denison for preparing him to work with families from so many cultures.

“In the post-modern courses I took at Denison with Eloise Buker in the women’s studies department, we studied who we are and how we construct ourselves and our morals – and these dynamics are at play in international schools,” says Henderson. “It’s that understanding of how we construct ourselves and our discourses that is really vital to communicating deeply with third culture students and families – they are dreaming big about who they will be.”

While Henderson loves this work, he is beginning to feel the travel bug once again. After more than a decade in Bangkok, he, his wife Sirina, and their one-year-old Matthew will be moving to Kuala Lumpur, Malaysia. There, he will take over as director of curriculum and instruction at the Mont Kiara International School.

However, before this family moves on to make a new home, they will be returning to an old one. As they do every other year, Henderson and Sirina will visit America this summer and bring Matthew to meet his grandparents for the first time in person.