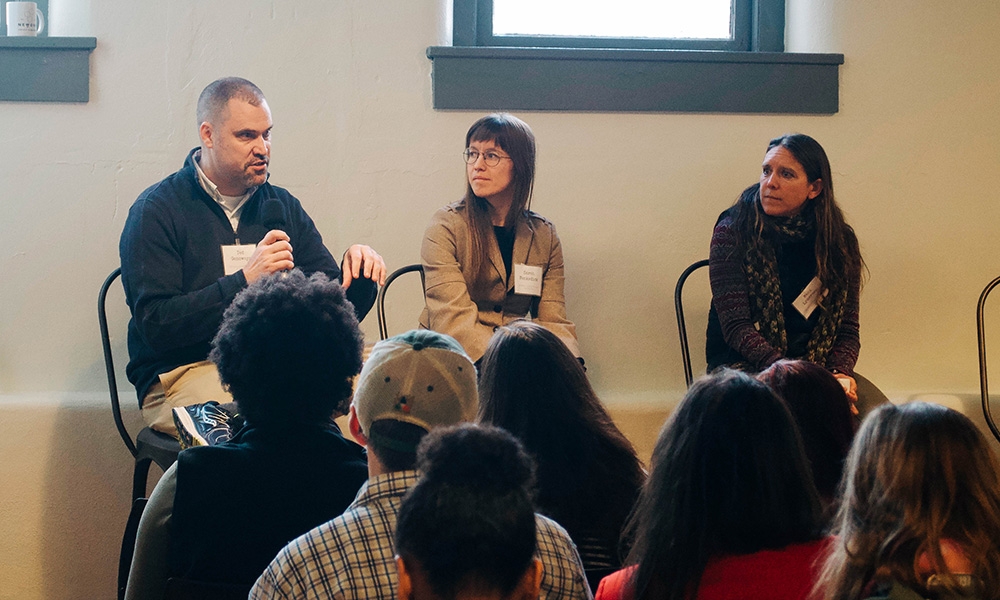 More than 50 writers, including media thought-leaders, and radio-, video- and photo-journalists, gathered at the Between Coasts Forum hosted by Narrative Journalism at Denison.

The semiannual event gives greater stature to reporting on middle-American small towns — a way to correct the American narrative, which can be skewed by national media. The fourth national gathering of journalists for the forum took place in Newark, Ohio, close to its original home in Central Ohio. The event last took place in May at Northwestern University’s Medill School of Journalism in Chicago.

“We feel that hosting the event in Newark reinforced the values of Between Coasts,” says forum co-founder and Denison University Narrative Journalism Chair Jack Shuler. “Newark is representative of places that are often ignored by the national press, but have energy and excitement about their future.”

“It also reinforces the heart of what we are trying to accomplish through our Narrative Journalism concentration at Denison,” Shuler continues. “We teach students how to engage and understand the complex viewpoints of people of various backgrounds who live in smaller communities.”

Between Coasts Forum co-founder and Denison University English Professor Mike Croley says, “We’ve created an environment where reporters are supported and their work is valued.” He added, “Denison is a place where journalism is built, made, and fostered. These forums are great experiences for our students. They get to see how real journalists work, attack their stories, and uphold the best ideals of their profession.”

The conversations at the forum focused on covering under-reported communities in America, with topics such as immigration, climate change, the impacts of big companies on small-town economics, takeaways from the midterm elections, and virtual reality-enhanced journalism. Journalists and Denison students took part in small group discussions and networking opportunities.

“The forums are an extension of the university’s liberal arts mission, and they expose our students to some of the best writers of our day.” -Mike Croley

Freelance reporter Mason Adams says, “The Between Coasts Forum is a place where I get the chance to meet and talk with journalists of a similar mindset. The personal interactions truly left me inspired and with a lot of new ideas.”

Denison University senior Savannah Delgross reflects, “The forum is an open, honest environment. I am inspired by everyone’s willingness to learn from each other. As a student, I appreciate writers sharing what works and what doesn’t work for them in their careers.”

The event draws attendees from a diverse set of backgrounds and experiences, with freelance reporters who cover Blue Ridge and central Appalachian communities, a radio host of NPR news, the executive editor of The New Republic magazine, a New York Times bestselling author, the founder and editor of Southerly, the 2015 Great Plains Journalist of the Year, an emerging media producer at NET Nebraska, a podcaster and contributing writer to the Virginia Quarterly Review, a documentary filmmaker from Newark, the founder and publisher of The New Territory, a former national reporter for USA TODAY, the former deputy director of the Columbia Journalism Review, the editor of the Columbus Dispatch, a Filipina visual journalist, and many more.

“I love the sessions and meeting the other attendees. There is a lot of brainpower and creativity in that room that inspires great work,” says Matthew Hansen, a metro columnist for the Omaha World-Herald.

The Between Coasts Forum was created and launched in January 2017 by Shuler and Croley, in response to an outcry from writers whose stories and perspectives from middle America had been overlooked during the 2016 election cycle. Denison hosted the first and second Between Coasts forums on campus in January and September 2017, followed by the third at Medill in May 2018. More forums are being planned.

To read local journalism with a national outlook, visit betweencoasts.org