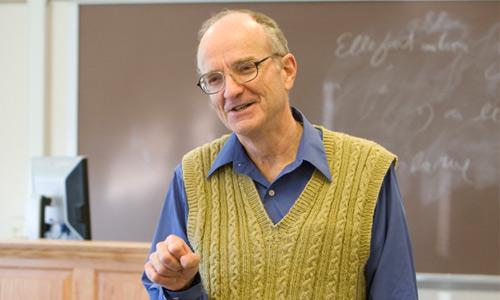 On Oct. 9, 2014, Charles O’Keefe, professor emeritus of French, received an unexpected call from NPR’s Lynn Neary. The recipient of the 2014 Nobel Prize for Literature had just been announced, French author Patrick Modiano, of whose writings O’Keefe is an expert. Here is O’Keefe’s humorous accounting of the call, and his reflections on Modiano.

That was the nerve-wracking refrain that ran through my telephone conversation with NPR’s Lynn Neary late on the morning of Oct. 9, 2014. She had contacted me about the announcement the same day that French writer Patrick Modiano had been awarded the Nobel Prize for Literature. Planning a short piece for that evening’s broadcast of All Things Considered, she had a grab bag of different questions to ask me about Modiano, plus she wanted to get my own reaction to Modiano’s award.

I’ll admit to having been a bit leery from the start. I imagined myself trying to say something —anything — worthwhile when faced with questions that in effect would boil down to this: “So tell me in a few sound bites what you think of a novelist/playwright/song writer/movie script writer/author of children’s books whose novels—more than thirty to date—have won every prestigious literary award that France has to offer, along with a number of international awards.”

With an inward sigh of resignation I began to answer Ms. Neary’s hop-scotching questions, all the while hoping that I could develop even a modestly coherent narrative thread about Modiano’s oeuvre. Ah, but then, almost from the start, thanks either to Time Warner’s phone service or my aged wireless phone, the refrain became a part of the conversation: “Are you still there?! Hello?!” “Can you hear me?! I’m still here!”

“Modiano’s novels in fact owe a great deal to the ‘are-you-there?’ refrain, but as applied to the Holocaust.”

Had I really thought “thread”? How about stress-snipped fragments!

But after the interview, there was one of those eerie coincidences sometimes spotted in retrospect. It occurred to me later that Modiano’s novels in fact owe a great deal to the ‘are-you-there?’ refrain, but as applied to the Holocaust. His narrators—almost always sharing some biographical details with him—often confront France’s time of occupation by, and (most damningly) collaboration with, Nazi Germany.

“Are you still there?! Hello?!” the narrators obsessively say to absent figures touched directly or indirectly by France’s crime. But they confront those figures only through wispy, elusive memory that turns out to be largely imagination.

Silly as it sounds, many of Modiano’s narrators and even Modiano himself believe that their creative, obsessive efforts of “memory” can not only evoke what the Nobel committee called ‘the most ungraspable human destinies,’ but can actually produce a conversation of substance—almost material substance—with some of those destinies. “Yes, I’m still here.”

Silly to be sure, but Modiano’s art pulls it off, witness his regular appearance on French best-seller lists and, of course, his Nobel.

Silly—but then actually so are the narrative gambits of Homer’s “Odyssey,” Dante’s “Divine Comedy,” and Proust’s “In Search of Lost Time,” texts that can be referenced in trying to situate Modianos’ art. Read for example Modiano’s “Dora Bruder,” first published as memoir, later as novel: you won’t come away from it with thoughts of silliness.