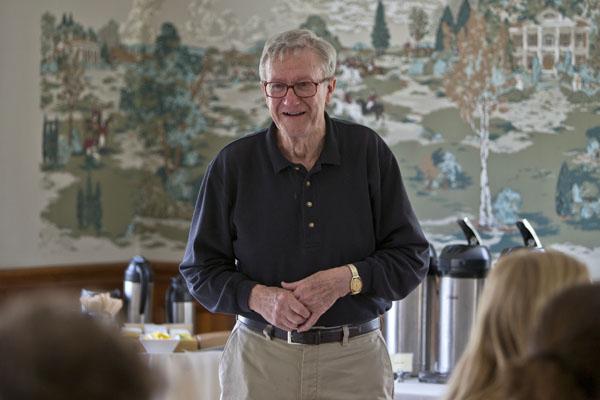 After more than 50 years of teaching mathematics, Professor Don Bonar was "clapped out" of his last class.

Great teachers are the culmination of their experiences as mentors, researchers and instructors. Don Bonar, professor of computer science and mathematics, is no exception.

Part of his secret may be that he’s had a long time to accumulate those experiences — he is retiring after having completing his 51st year of teaching at Denison. At the end of his final class, students, alumni and fellow faculty gathered for a surprise “clap out” to honor him and his long and fruitful work.

“In all that time, he has never canceled a class, said Dee Ghiloni, academic administrative assistant for the mathematics and computer science department. “So many people wanted to be here when the class ended, and when he told me that he was simply giving his students a study guide for their finals, I panicked.”

She reached out to the students in the class. “Ask questions, pretend you have a problem, I don’t care what you do, but keep him in that room the full 50 minutes!”

The students came through — and Bonar walked out to find an unexpected and sizable crowd of well-wishers. The hall was so packed with students, faculty, alumni and friends that he couldn’t move from the doorway of his classroom.

“I’ve always loved teaching and learning. If I get my math right, for 73 years I’ve been in school – either in front of the desk or behind it,” said Bonar, who was touched by the array of admirers. “It really is a delight to work with young adults. My goal is to open up the wonderful world of mathematics, and learning in general. And it’s icing on the cake to witness the growth, in the fullest sense of the word, that occurs with our students.”

Some fun facts about Bonar: His favorite class to teach is calculus, which is viewed by many as one of the greatest creations by mankind. He has an Erdos number of 1, which is sort of like the Kevin Bacon game for mathematicians. In this case, what’s counted is the number of relationship links to internationally acclaimed Hungarian mathematician Paul Erdos. Since Bonar has published a paper with Erdos, he’s at the top of the list. And Bonar has an Einstein number of 3, just three links to the theoretical physicist whose work changed the direction of scientific inquiry. Pretty amazing stuff.

For Matt Neal, a fellow professor of mathematics and computer science, Bonar has been both a steadfast rock and an inspiration.

“For the first twelve years of my career at Denison my office was across the hall from Don. We talked almost every day about teaching, research questions and life at Denison. He was an extremely important mentor to me as a teacher and a scholar.”

Bonar was born in Murraysville, W.V. and attended class in a one-room schoolhouse, complete with two outhouses. A pot-bellied stove provided heat and a large bucket and dipper provided refreshment. After graduation, he was awarded a four-year Board of Governors Scholarship to West Virginia University where he received a bachelor of science in chemical engineering in 1960.

While at WVU, he was a member of the physics, chemistry, and chemical engineering honoraries, and served as president of Tau Beta Pi, the engineering honorary. Two National Science Foundation Fellowships supported his graduate work in mathematics. He received a master of science from WVU in 1961 with a major in mathematics and a minor in physics and a doctorate from Ohio State University in 1968. In 1965, Bonar joined the Denison faculty, where taught mathematics, statistics and computer science.

Over his years of teaching, Bonar has accrued many awards, including the Richard King Mellon Foundation Award for excellence in teaching and scholarship and the Sears-Roebuck Teaching Excellence and Community Leadership Award. He also was selected to as the first professor to fill the fully endowed George R. Stibitz Distinguished Professorship in Mathematics and Computer Science.

“I remember when I first came to Denison he greeted me with ‘Welcome to Deni-doo!’ an expression I had not heard before — or since,” said Neal. “I think it was one of his many famous ‘Bonarisms’ that students have compiled over the years. The phrase reflects his deep love for Denison. This man has forgotten more about calculus than any of us will ever know. He has been a tireless worker for Denison and a transforming inspiration to his many students.”