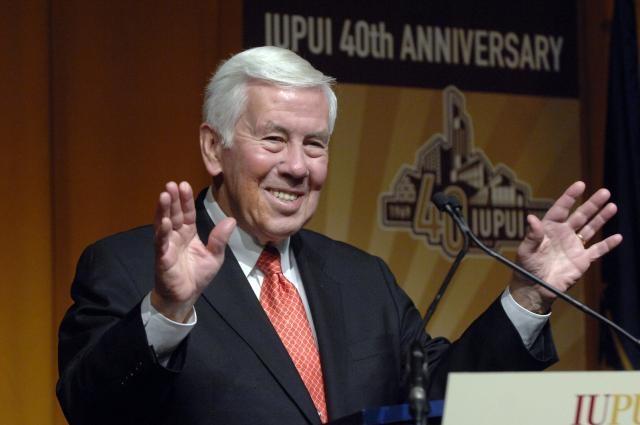 Richard Lugar; a senator from Indiana, born in Indianapolis, Marion County on April 4, 1932.

Richard Green Lugar, a former Senator from Indiana; born in Indianapolis, Marion County, Ind., April 4, 1932; attended the public schools of Indianapolis; graduated, Denison University, Granville, Ohio 1954; attended Pembroke College, Oxford, England, as a Rhodes Scholar and received a graduate degree in 1956; businessman, involved in the manufacturing of food production equipment, livestock and grain operations; United States Navy 1957-1960; member, Indianapolis Board of School Commissioners 1964-1967; mayor, Indianapolis 1968-1975; unsuccessful Republican candidate for the United States Senate in 1974; elected as a Republican to the United States Senate in 1976; reelected in 1982, 1988, 1994, 2000, and again in 2006, and served from January 3, 1977, to January 3, 2013; chair, Republican Senatorial Campaign Committee (Ninety-eighth Congress), Committee on Foreign Relations (Ninety-ninth Congress, One Hundred Eighth and One Hundred Ninth Congresses), Committee on Agriculture, Nutrition and Forestry (One Hundred Fourth through One Hundred Sixth Congresses, One Hundred Seventh Congress [January 20-June 6, 2001]); unsuccessful candidate for renomination to the Senate in 2012.