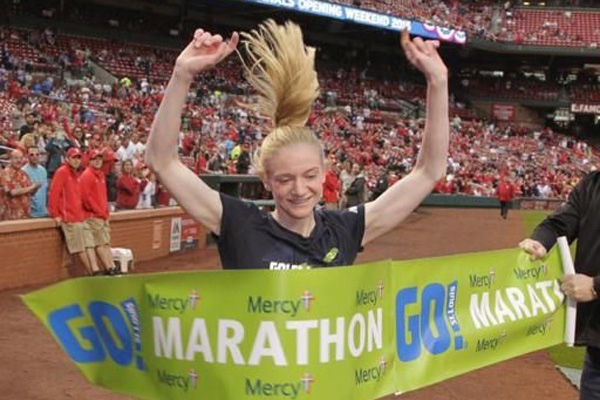 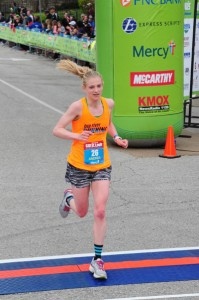 Andrea Karl ’14 thought she was in first. No, she knew it. The cyclists who clear the lead runner’s path were next to her and she felt good, really good. If she kept this pace, she would achieve a personal record and win her second marathon, the second she had ever run.

Eventually, Schler was disqualified due to a suspicious lack of data from timing markers spread across the course. Three days later, Karl, a biochemistry major at Denison, was a local celebrity.

“It’s been surreal, just hilarious. I guess everyone has his or her 15 minutes of fame, and I just had mine,” says Karl, who has been regularly recognized on the street since the story went public. Several people even requested selfies.

In order to properly acknowledge the real winner, Karl was also invited to attend the Blues’ first-round playoff hockey game and throw the first pitch at the Cardinal’s stadium after running a lap and breaking a ceremonial tape.

“I was nervous but my goal was just not to throw it into the ground, and it turned out pretty good, a little more arc than a professional pitch,” says the Powell, Ohio, native with a laugh.

While the recognition was appreciated, it wasn’t necessary for Karl. Since moving to St. Louis in July to get her Ph.D. in molecular genetics and genomics at Washington University, running has become a way to meet people, make friends, and maintain a little bit of the competitive spirit she had as the four-year starting goalie for the Denison women’s soccer team. (That’s right – goalie. She didn’t even run during the games.)

In spite of her new celebrity status, Karl is mainly focused on finishing her spring classes at Wash U and spending more time in the lab this summer. She is looking forward to many more marathons in her future, including the Boston Marathon, which she qualified for with her new personal record of 2:54.