Unexpected connection in the classroom 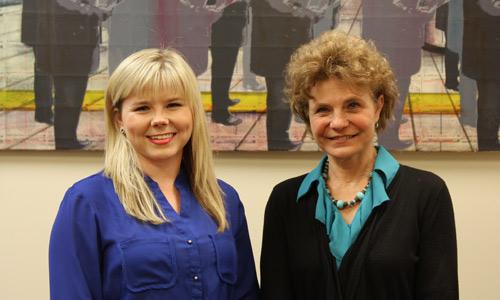 When Sammy Seibel ’17 completed her assignment in her First Year Seminar an WWII, she didn't realize she would be connecting with a piece of her own family history.

Even more than 60 years after the Holocaust, effects from that horrific event continue to reverberate. This fall, an unexpected echo found its way into Sammi Seibel's First-Year Seminar. The writing-intensive class centered around WWII and, in one of her first assignments, professor Eva Revesz asked the class to write a letter about what interested them in the subject. Seibel had a ready response to that project. Her grandfather was Col. Richard Seibel was the U.S. Army officer in command of the liberation of Mauthausen, the last concentration camp to be freed in WWII, and his stories about that experience had been part of her family lore from her earliest memory.

Reading Seibel’s letter, Revesz was profoundly shaken. Her father, Andrew Reeves, was one of the prisoners who had been liberated by Col. Seibel.

Andrew Reeves was only 21 years old on May 5, 1945, the day of Mauthausen’s liberation. Sixty-eight years later, he still celebrates the anniversary. Reeves (who changed his name from Revesz when he came to America) recalls that day.

“Rumors about the SS leaving were flying around the camp that day. All kinds of activity was happening. I was simply too exhausted to be excited and stood in the yard in puzzlement. Then I spotted an SS contingent line up in formation, remove the ammunition magazines from their rifles, and march away. Still not comprehending what was happening, I saw a vehicle driving in and thought ‘Oh my God, now I’m going to be shot.’ ”

As the car arrived, Reeves wondered where was the swastika that was painted on every SS vehicle. As it grew closer he realized that the car was a Jeep holding two helmeted men who looked at him in astonishment. (At the time, Reeves estimated he weighed about 70 pounds.) “Are you English?” he asked. They replied, “No, we’re American.” As if that made a difference to a Hungarian concentration camp refugee, Reeves jokes, decades later.

The Americans were part of an advance patrol that reported back to Col. Seibel, who soon entered Mauthausen with a larger contingent. He had no idea what was waiting for him. At the time of its liberation, the camp held about 18,000 injured, sick and starving prisoners from 21 nations, and more than 700 dead that there had been no time or room to bury. Seibel scrambled together a plan with the very few resources at his disposal. The water, sewage and power lines had been disabled and there were only enough combat rations for his own soldiers. With a doctor’s consultation, he began feeding the former prisoners a very weak gruel of potatoes and water, slowly adding vegetables, bread and meat to their diet as the people regained strength. Seibel was in charge of the camp for 35 days, and when he left, fewer than 4,000 people were still housed there, the rest had been transported back to their home counties.

In a video interview, Seibel, who died in 1999, estimated that between 125,000 and 250,000 people had been killed in Mauthausen. “An Army War Crimes Commission major said that of all the camps he had investigated, the atrocities that had been committed in Mauthausen were the worst he had seen.” Siebel added, “One cannot imagine man’s inhumanity to man.”

In gratitude for their liberation and care for them, the former prisoners brought Seibel an American flag “made of scraps of clothing and anything else they could find that was red white and blue, with 56 stars. They didn’t know how many states were in the United States. I immediately flew that flag over the camp, the first American flag to fly over Mauthausen.”

Reeves was transferred to Mauthausen just three months prior to the liberation, after toiling a year in a labor camp. When he arrived, he saw that the conditions were so terrible that he decided to calculate the number of days he thought he could survive. Now an emeritus professor of occupational and health sciences at Wayne State University in Detroit, Reeves met his wife (a Catholic) in a Jewish refugee camp in Munich, before migrating to the United States. He credits the Americans for his freedom and his recovery.

“Before that first Jeep pulled away, I asked them for food,” says Reeves. The soldiers fished around in their vehicle and came up with a few saltine crackers and a can of condensed milk. “That can of milk was the best-tasting thing I had eaten in the entire past year.”

At Mauthausen, Seibel also freed Simon Wiesenthal, who later became famous as a Nazi-hunter and author of several memoirs. The Simon Wiesenthal Center, established to support Jewish rights worldwide, was named in recognition of his work and dedication. Today, Seibel’s flag holds a place of honor there.