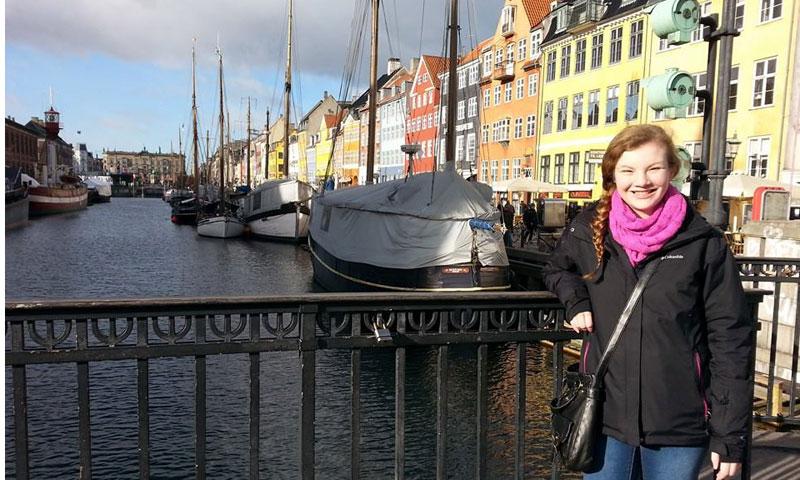 Advocacy and environmentalism have been part of Alana Murray’s life since she was a little girl. This year, she is a senior Environmental Studies and Sociology double major.

The Spring semester of her Junior year, Alana studied abroad in Copenhagen, Denmark. Denmark, a country aiming for 50 percent renewable power on their electric grid by 2020 and 100 percent by 2050, is a perfect location for a student focused on sustainability and the environment. However, it also resulted in a palpable culture shift for Alana, who is originally from Indiana.

“Even going into the supermarkets it was difficult to find something that wasn’t organic,” Alana said of the experience.

While there, she stayed in a green living community with other American students and three Danish Resident Assistants. Every Thursday, the group went to a local co-op where they purchased vegetables to prepare a sit-down, vegetarian family dinner. They also volunteered at a co-op, and frequently sorted and packed vegetables for pick up and purchase.

On the weekends, the group went on excursions with sustainable themes. One such visit was to a 100 percent sustainable island off the coast of Denmark. This trip in particular showed Alana that, though the island was relatively small, it was definitely possible to be completely sustainable.

Alana lived at the center of Copenhagen and was a five minute walk from her classes, one of which was a course named Food Systems. The class explored the systems that produce food, as well as the problematic aspects of agriculture and the agricultural industry. Delving into the study of food and its impacts has long been one of Alana’s interests.

The summer before she went abroad, Alana worked as an intern with the Garden of Hope in Newark. Last semester, she completed her senior research on local food movements. She is also currently in Dr. Olivia Aguilar’s Sustainable Agriculture class.

During her senior research, Alana found local food movements (such as farmers markets in Granville and Newark) often create a monoculture identity for themselves that tend to focus on white upperclass identities. Through interviews and article research, she discovered that farmers markets are coded as white spaces, and this makes it difficult for people of color to exist and participate with such spaces.

The intersection of social and environmental issues has been a big part of Alana’s life. As a young girl living in Michigan City, Indiana, a natural gas and electric provider dumped fly ash into a body of water behind her house.

“I grew up going to marches and seeing my mom give speeches to try and clean our water. It directly affected me, I couldn’t drink our tap water for years. Having that background really showed me how important the environment is,” she said of the incident.

Alana is hoping to do more research on food movements after graduating from Denison. She also hopes to work at the Indiana Dunes National Lakeshore and get involved in the community garden projects there.