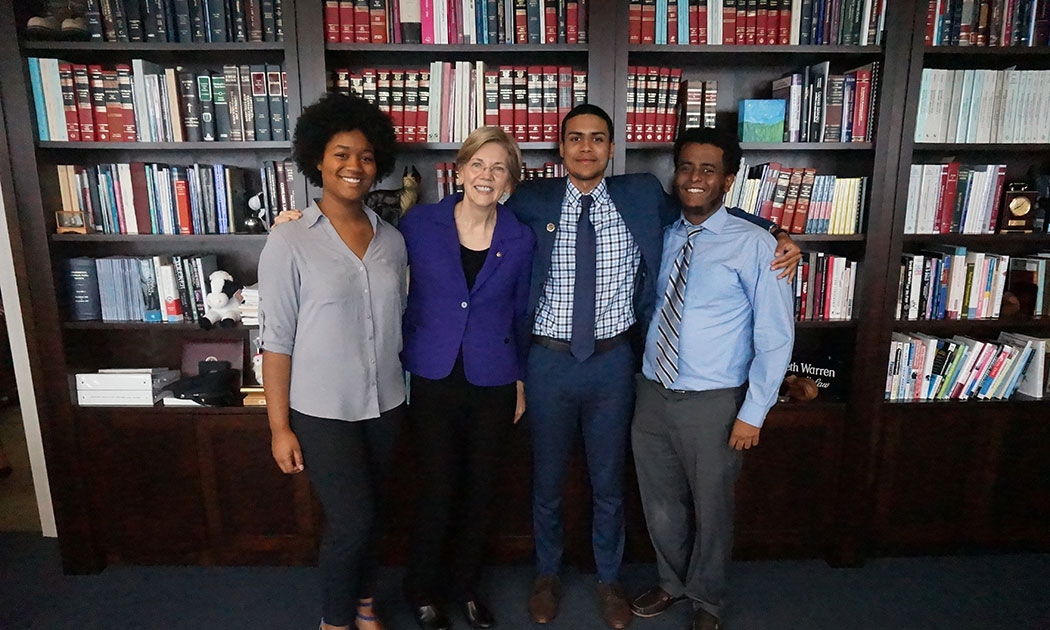 Uriel Girma’ 19, a Communication & Spanish double-major and Cinema minor from Cambridge, MA, did not have a background in political science or law when he was looking for an internship in politics. Even so, the Posse scholar was determined to work with U.S. Senator Elizabeth Warren. During the summer of 2017, that is precisely what he did.

While he worked at Warren’s Boston office, Girma worked on issues like student loans, social security benefits, and house foreclosures. The Senator gathers information related to the concerns of residents and then uses them to propose legislation that might help solve their problems. Girma played an active role in that process.

Each day, Girma traveled from his home in Medford to downtown Boston. His daily tasks at the Senator’s office included responding to mail, answering phone calls from the residents, recording cases in a log, and transferring pertinent information to the Senator’s legal team. “You have to know how to respond appropriately in many different situations,” Girma says. He reports learning a lot from the Senator’s staff, especially when he handled a tough case.

Girma remembers the toughest of those cases. He calls it the case that “touched his heart.” One day, he received a phone call from 80-year-old man who was on the verge of being homeless due to problems with his social security benefits and the mortgage on his home. He sought out help from the Senator but the man’s situation was so bad that Girma was not sure that his colleagues would be able to. After several days, Girma received news that the Senator’s staff had helped the man keep his house and correct the error with his social security. “The gratitude he shared with me was out of this world,” he recalls. From that moment on, Girma realized how the kind of work he did during his summer internship can actually save someone’s life. “Senator Warren is really big on making sure that no matter how things [get] done, directly or non-directly, needs must be meet. Even though we cannot help people some specific cases, we always try our best to direct the situation into a better direction.”

Reflecting on the value of the internship, Girma called the internship “incredible” because it allowed him to play an active role in Massachusetts politics. Indeed, Girma has already started a plan to go to Law School. He wants to help people who facing discrimination, drug addiction, and mental illness. He says, definitively: “I want to make a change to help those in need.”