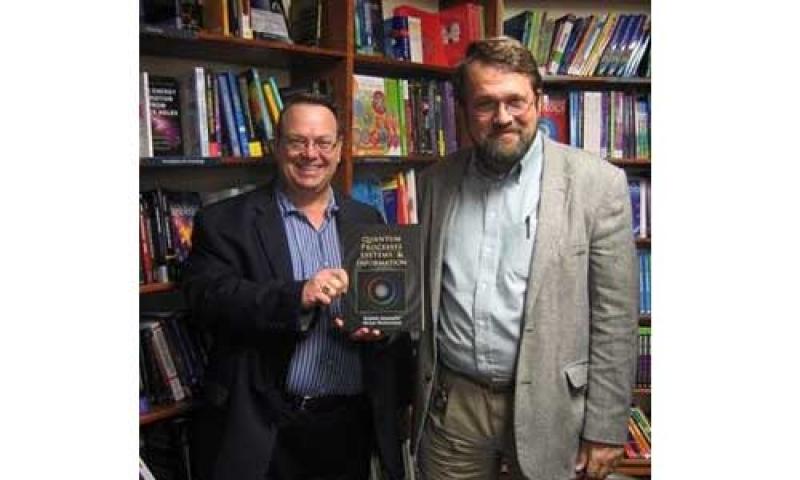 Denison University Professor of mathematics, Michael Westmoreland and Benjamin Schumacher, Professor of physics at Kenyon College, are co-investigators of a $73,425 grant provided by the Foundational Questions Institute. The grant will support research into the connections between information about the observed world, which an individual can only partially see, and the actions, which are conditioned upon that partial description of the world. The grant also will support research into these same questions by undergraduate students.

“Revolutions in our understanding of the universe involve new insight about the human abilities to acquire and use information,” says Westmoreland. “For example, prior to the Copernican Revolution it was thought that earth could not be in motion about the sun because we do not feel any such motion. Galileo pointed out that anyone riding along with a uniformly moving object cannot gain information about that motion using only information from the local surroundings. His clear example was of a passenger in the hold of a ship can gain no information as to whether he is in port or moving smoothly at sea by using only information gleaned from the hold.”

In the 1940s, scientists Claude Shannon, Norbert Weiner and others realized that information was itself subject to mathematical analysis. Starting in the 1970s, scientists such as Rolf Landauer, John Wheeler and Richard Feynmann realized that the concrete representation of information is an important issue in physics. This realization led to many recent advances such as quantum cryptology, quantum teleportation and the potential of quantum computing.

Westmoreland and Schumacher also are coauthors of a highly regarded textbook, “Quantum Processes Systems, and Information.” John Preskill, the Richard P. Feynman Professor of Theoretical Physics at the California Institute of Technology, said of the pair: “Though the pioneers of quantum mechanics recognized that information encoded in quantum systems has counter-intuitive properties, the systematic development of quantum information theory began only relatively recently. Many quantum information concepts are both mathematically accessible and physically illuminating, yet until now have been omitted from introductory quantum mechanics textbooks.”

He added, “This superb book by Ben Schumacher and Mike Westmoreland is perfectly suited for a modern undergraduate course on quantum mechanics that emphasizes fundamental notions from quantum information science, such as entanglement, Bell's theorem, quantum teleportation, quantum cryptography, and quantum error correction. The authors, who are themselves important contributors to the subject, have complete mastery of the material, and they write clearly and engagingly. Schumacher and Westmoreland are equally effective at covering the more standard material included in other texts. Indeed, this book could be used successfully in a traditional quantum mechanics that shuns the rich insights quantum information theory can provide. But that would be a terrible shame.”

The Homestead
The Homestead is a student-run community with a focus on sustainability. It is home to an "earth ship" and houses 12 students in total.