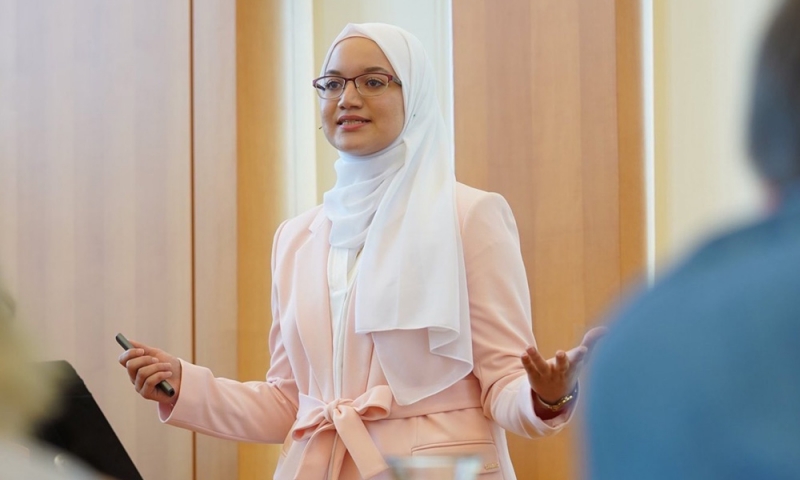 Denison University is honored to announce that Sara Abou Rashed ’21 has been awarded a Beinecke Scholarship worth $34,000 toward a graduate course of study in the arts, humanities, and social sciences. The Beinecke Program was established in 1971 by the Board of Directors of The Sperry and Hutchinson Company to encourage highly motivated students with exceptional promise in continuing their education.

This year, 102 undergraduate institutions each endorsed a single nominee following a competitive selection process at the campus level. The 18 scholars awarded a Beinecke demonstrate strong intellectual ability, unusual creativity, and evidence of leadership.

Abou Rashed also is a 2020 Finalist for the Truman Scholarship, the foremost graduate fellowship in the United States for those pursuing careers as public service leaders. A living memorial to the thirty-third president, the Truman Foundation identifies change agents at a young age and rewards their potential. Previous winners have included US Supreme Court justices and members of federal and state legislatures.

Denison University President Adam Weinberg notes, “Sara is a remarkable human being. She is passionate about her work of building bridges between cultures and ideas. She is a true Denisonian - an autonomous thinker, an active citizen, and a discerning moral agent. We are very proud of Sara and look forward to watching her as she makes her mark on society.”

Adam Davis, director of Denison’s Lisska Center for Scholarly Engagement, who worked closely with Abou Rashed on her scholarship applications, comments, “Sara’s creative energy, her drive and resilience, her entrepreneurial spirit, and her expressive abilities as a storyteller are truly inspiring. It is a joy and privilege to help her think through the many ways she can use her skills and talents in the nation’s service and the service of humanity.”

Majoring in Creative Writing and international studies with a Middle East & North African Studies concentration, Abou Rashed finds herself at the intersection of politics, arts, and community building. In 2018, she chronicled her family’s history of displacement in a one-woman theatre production titled, “A Map of Myself: My Odyssey to America,’’ with director Larry Smith. As a Palestinian-Syrian-American, Abou Rashed describes her show as “a revolution on war, immigration, language, home, history, and everything in between.’’ Since its launch, she has performed her show over 15 times in cities across the nation, including Columbus, Philadelphia, and Chicago.

Abou Rashed aspires to bridge the worlds of politics and arts with her work and graduate studies. “Given my interest in the politics of writing and language, I also plan to be working with organizations in local neighborhoods, particularly youth and immigrant nonprofits that prioritize the arts for community engagement,’’ says Abou Rashed.

Abou Rashed envisions many possibilities in the future, from eventually earning a Ph.D. and teaching at a university to running for office. She hopes to carry on the legacy of disruptors like Edward Said, Naomi Shihab Nye, Joy Harjo, Lisa Majaj, Angela Davis, and David Blanco, who diversify the literary scene with unique investigations of individual and communal identities.

As a sixteen-year-old, she was nominated for a Pushcart Prize and was awarded the 2016 Denison Book Award. Her works appear in over 10 publications, including a forthcoming high school language arts curriculum by McGraw Hill. In Columbus, Abou Rashed is a speaker and member of the Arab-Americans of Central Ohio and the Palestinian Children’s Relief Fund, among others. She holds a full-tuition Denison/Columbus Alliance Scholarship.

Shepardson Hall
Named in honor of Dr. Shepardson, president of the women's college that merged with Denison, Shepardson is a suite-style residence hall.