One of the most distinguished garments in American theater has come home to Denison more than 70 years after Hal Holbrook ’48 took it on the road with him.

A white linen suit, which the award-winning actor wore on stage while impersonating Mark Twain in his famous one-man show, is the centerpiece of a collection of memorabilia the Holbrook estate gifted the university in the summer of 2022.

Holbrook, who died Jan. 23, 2021, at 95, donned replica suits in performing Mark Twain Tonight! for more than six decades to audiences worldwide. The original suit, however, was given to him by Everett and Martha Grace Reese — parents of Thekla “Teckie” Reese Shackelford ’56, one of Denison’s great benefactors, and David E. Reese ’62.

“When Hal and his wife Ruby were getting ready to do the Mark Twain show, Hal told my dad, ‘I need a white suit,’” Shackelford recalls. “My dad said, ‘I’ve got a white suit that you can have.’ It’s fabulous, and it’s fitting that the suit is back. This is where Hal’s career in theater began.”

Holbrook’s gratitude to Denison and its legendary theater director Edward A. Wright, who suggested the staged readings of Twain’s work, is well documented. But the delivery of Holbrook’s memorabilia to University Archives and Special Collections has unearthed a fresh batch of stories.

For instance, Holbrook made sure Wright received a small portion of the proceeds from Mark Twain Tonight!, which in 1966 won a Tony Award for its first Broadway run. Wright lived in an assisted living facility in Los Angeles during his later years and, following his 1995 death, Holbrook paid his mentor one final tribute.

“Hal took his ashes out on his 40-foot sailboat, along with several other of Ed’s students, and scattered them in the water,” says Joyce Cohen, Holbrook’s longtime assistant and trustee of his estate. “Hal never forgot how much Ed Wright meant to his career, and they always remained close.” 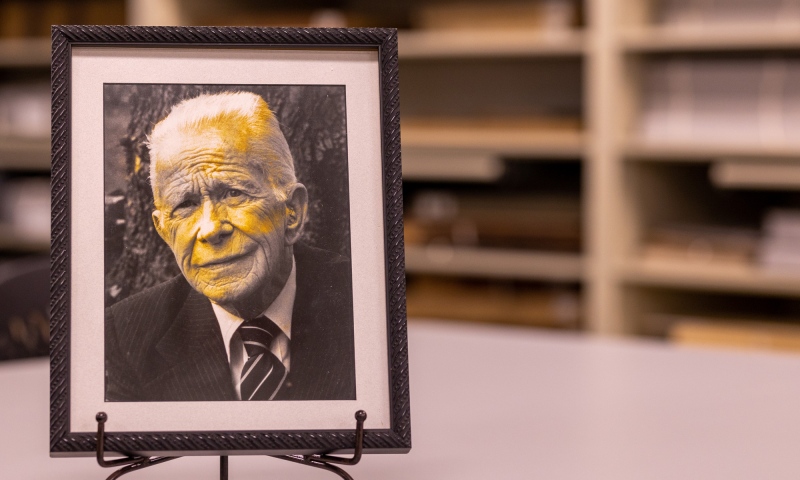 Holbrook specified in his trust that Denison should receive the original white suit, which university archivist and special collections librarian Sasha Kim Griffin sent to a professional conservator for cleaning. The suit, which sat in a garment bag for six years, will be returned to campus and placed on display in fall 2023.

Holbrook was raised by his grandparents and endured a difficult upbringing, adversity chronicled in his 2011 memoir, Harold: The Boy Who Became Mark Twain. 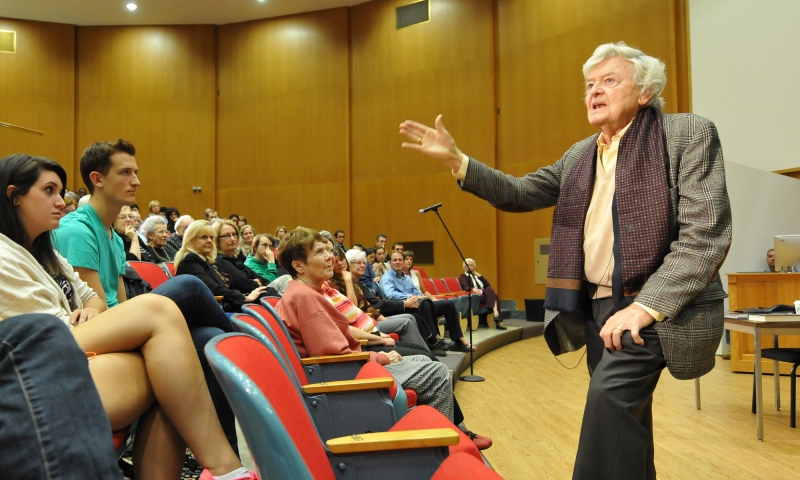 Hal Holbrook speaking on campus in 2012.

“Denison was a major highlight in his life,” Shackelford says. “I don’t think he connected emotionally with any place until he arrived at Denison.”

Her parents were among Holbrook’s greatest champions on The Hill. Martha Grace Reese, known to her friends as Gay, raised money for the Denison Summer Theater, which Wright founded, and Everett Reese loaned Holbrook money for the car he took on the road for the couple’s Great Personalities touring production.

When Holbrook’s first wife, Ruby Johnson ’50 — who also enjoyed an acclaimed acting career — became pregnant with the couple’s first child, she returned to Granville to temporarily live with the Reese family.

Shackelford shared her mother’s love for theater, often accompanying her to Denison Summer Theater rehearsals. She remains proud of having a front-row seat to the rise of Holbrook’s star and seeing one of the final performances of Mark Twain Tonight! with her brother David in Tucson, Arizona, in 2017.

“Mom and Dad always had a big party at the end of summer theater season for the students,” Shackelford says. “One night, mom asked Hal and Ruby to do the Mark Twain skit in our living room. Over the years, that white suit became legendary in our house. I think Hal felt the same way because he wore it for many years.”

In 2015, Hal Holbrook ’48 and Michael Eisner ’64 discussed how Denison set the stage for their careers.