When Susan Sholes Cox ’54 drove with her father from Middlebury, Vermont, to Granville, Ohio, in the fall of 1950, she expected a pretty seamless transition from one small college town to another. But she remembers feeling some surprise at the different backgrounds of her fellow Denison students.

“As an important point of reference, I had never heard of a cashmere sweater,” Cox recalls. “And when one of my roommates started into a diatribe against FDR, I was gobsmacked. Our family hero? I was, simply put, unprepared for this strange new Midwestern world.”

She wanted to be an artist, despite the usual warnings of certain poverty and limited careers for women. Her high school had music but no visual art instruction, so Cox remembers, “Denison offered riches.”

“I was a blank slate, ready to absorb all instruction and to experience all manner of creating art.” Horace King, then the head of the Art Department at Denison, was an engaging teacher. “I learned much from him,” she says, “most importantly, how to see, really see, what I was looking at.” By her senior year, Cox had developed a distinctive style and her senior project took her all over town, drawing and painting.

“One week after graduation I married my high school sweetheart. It was the 1950s, and anyone who wasn’t engaged felt conspicuously UNengaged.” TheCoxes soon found themselves in the unfamiliar roles of “corporate gypsies,” as Susan puts it, moving from state to state with Roger’s job while raising four children. She never let go of her creative eye or efforts, but there were fallow periods for producing work.

When a new assignment for her husband brought them back to Ohio, and with their children out of the nest, they settled in Columbus’ German Village, where Cox took up her drawing again, inspired by the picturesque neighborhoods which translated well into notecards and other marketable items. It was during this time she was commissioned by Denison for several years to produce holiday cards, the origin of her charming drawing of campus at right. By now Cox was restless to take the next step, and she enrolled in graduate studies in art at Ohio State. “I just wanted to paint,” she recalls.

Years later now, she continues to paint most days in her fourth-floor walkup studio in a South Boston warehouse, not far from where she and her husband moved in the city to live a little closer to grown children and grandchildren. Her stylistic inspirations are evident on her website, scoxartwork.wordpress.com, where you can read her artist’s statement and see a range of drawings and paintings that reflect the raw bustling urban energy of Pittsburgh, quiet poignant interiors, and lush views of her adopted city, Boston. “At last,” Cox says, “my dream of becoming a starving artist has come true!” 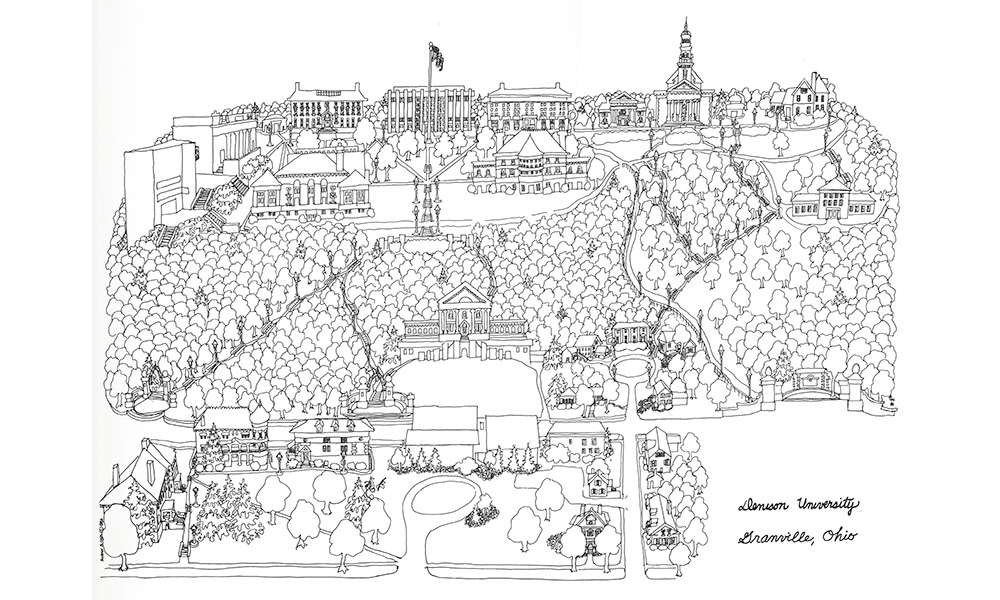