Sarah Davis ’94 was 16 years-old in 1988 when she first visited Yellowstone on a cross-country youth trip called Teens Camping Tour of the West. One day as they headed across the prairie in Colorado, the trip’s adult chaperones asked the kids to cover their eyes. When they stopped and took their blindfolds off, the kids saw the Rocky Mountains soaring up from the plains before them. For Davis—who was accustomed to the rolling green spine of the Appalachians in her home state of North Carolina—the mountains jutting from the far edge of an endless sky struck her like some kind of revelation. At Yellowstone, she marveled at the geysers and the otherworldly colors of the park’s thermal features. She saw her first grizzly bear and stood spellbound on the shore of Yellowstone Lake, which sits inside a 136 square-mile caldera at an elevation of nearly 8,000 feet.

The trip made a lasting impression on Davis and inspired a lifelong love of the outdoors and America’s vast array of national parks and public lands. Coming back to Yellowstone three decades later as the first female chief ranger in more than a century of park history has been a dream come true. “I have to pinch myself every day because I can’t believe I’m here,” Davis says, speaking by phone from her home at the Yellowstone headquarters in Mammoth Hot Springs, Wyoming.

As the Chief of Visitor and Resource Protection, Davis is responsible for keeping people safe from nature and nature safe from people in a landscape equal to about half the size of Connecticut. Founded in 1872, Yellowstone is the oldest national park in the United States and one of the most heavily trafficked, drawing about 4 million visitors annually.

Davis wore the National Park Service’s iconic “flat hat” for the first time in 1996 in her position at Blue Ridge Parkway National Park in North Carolina, but the road that led her back to Yellowstone did not begin there. It began, as Davis tells it, with a fortuitous disappointment. After graduating from Denison with a history degree, Davis had her heart set on a high school teaching job in her hometown of Lexington, North Carolina. As fortune would have it, the school chose another candidate. “At the time, I was pretty devastated,” Davis says, “But my mom said, ‘Don’t worry, things happen for a reason and the right thing will come.’”

Davis did not have to wait long. Jeff Keller, her former assistant Denison basketball coach, called her one day to ask if she might be interested in an assistant coaching job at Warren Wilson College in Black Mountain, North Carolina. Davis accepted and soon found herself living in the heart of the Blue Ridge, astride the Appalachian formation that stretches from Pennsylvania to Georgia. Students run nearly every facet of the Warren Wilson, from custodial duties to food service and the college’s working farm. Davis’s players were often tied up until evening with their work responsibilities, so practice did not usually start until seven or eight at night. With lots of daylight time on her hands, Davis set out to explore. 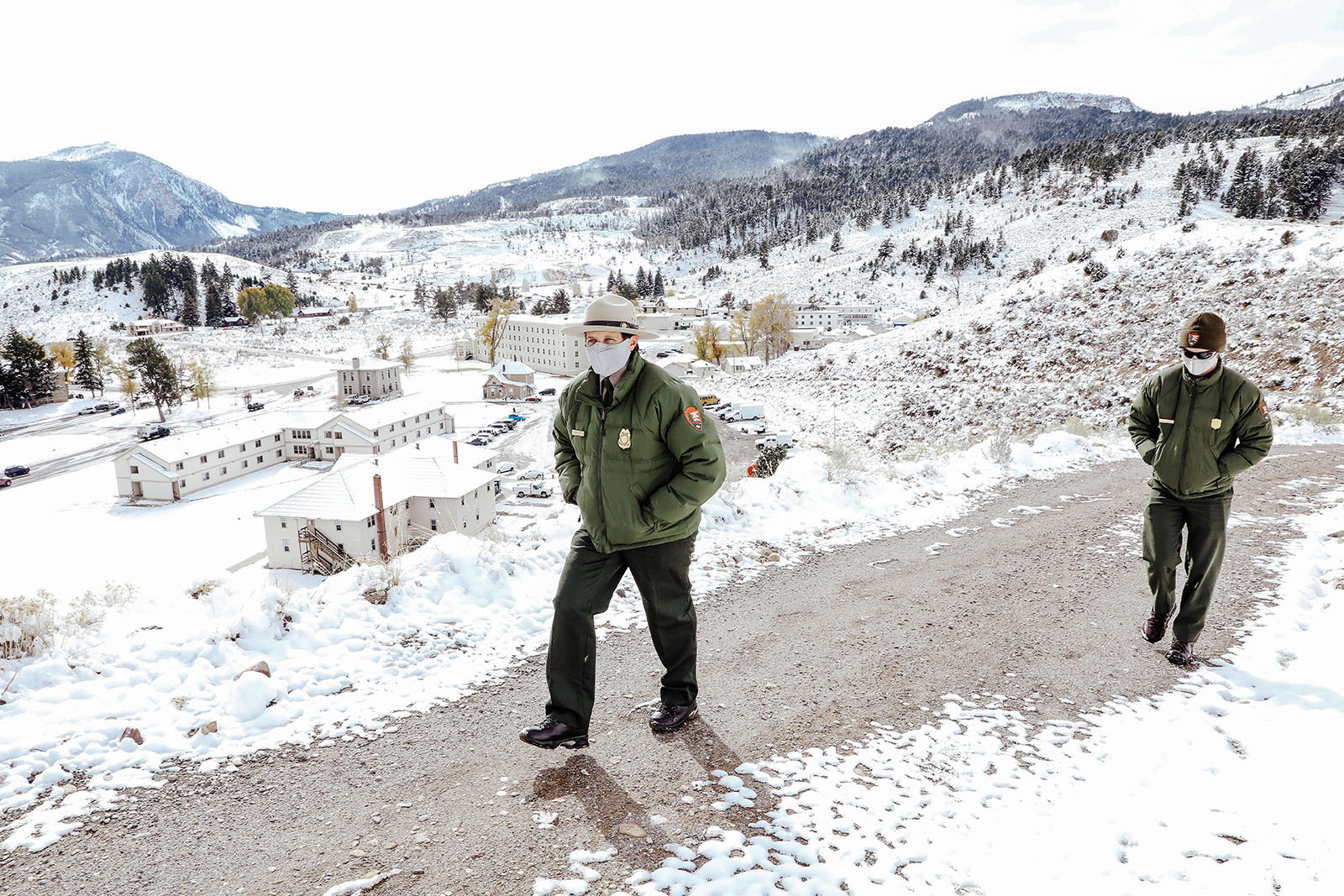 Black Mountain was just 15 minutes from the Blue Ridge Parkway, a 469-mile highway managed by the National Park Service that runs along the ridgeline of the Appalachians between Shenandoah National Park in Virginia and Great Smoky Mountains National Park on the North Carolina-Tennessee border. Davis began hiking the trails that shoot off from the Blue Ridge Parkway almost every day. She quickly became enthralled by the history of the park and the surrounding region. One day, she stopped by the park’s visitor center and asked how she could volunteer. The person at the desk told her to leave her name and number and said someone would be in touch. “The funny thing about that was at first they didn’t call me back,” Davis says with a laugh. “And so, I went back again and said, ‘Hey, I really am interested in doing this,’ and she said, ‘Well, if you come back twice that means you really are interested!’”

As a volunteer, Davis marked the park boundary and helped out at the visitor center, where she gave travelers tips about the parkway’s best lookouts and driving times between points of interest. She enjoyed the work so much that her supervisors encouraged her to apply for a paid summer seasonal job. “That’s how I kind of got my foot in the door in the federal government and with the National Park Service,” Davis says. As an interpretive ranger the following summer, Davis did nightly programs at campground amphitheaters to teach visitors about the park’s history and lore, drawing on the foundations of Civil War history she gained at Denison. She also enjoyed explaining how every part of the parkway—a feat of civil engineering commissioned in 1935 by President Franklin Roosevelt—was carefully designed to maximize visitors’ enjoyment. “Every view when you come around a curve is designed to put your car in the best position so that you’re seeing the best view, so that you’re seeing as far as you can,” Davis says.

Looking back, Davis realizes that her summer as an interpretive ranger helped her truly connect with the National Park Service’s mission, stated in its founding charter in 1916: “to conserve the scenery and the natural and historic objects and the wild life therein and to provide for the enjoyment of the same in such manner and by such means as will leave them unimpaired for the enjoyment of future generations.” As much as she loved her ranger interpreter gig, Davis was frustrated by acts of theft and vandalism that she witnessed. Once, she saw a visitor disassemble a jackleg fence, load the timbers into his truck and drive away. “I didn’t have the authority or ability to stop this person,” Davis says. “There was nothing I could do and it really, really bothered me.” Conserving parks for the enjoyment of future generations meant someone had to protect them—someone had to be vigilant. Davis decided that could be her, so she attended one of the National Park Service’s seasonal law enforcement training academies and was hired back at Blue Ridge Parkway National Park the next summer as a law enforcement ranger.

Two and a half decades and 11 parks later, Davis has risen to become one of the most important law enforcement rangers in the entire National Park Service, responsible for protecting America’s flagship, and its 2.2 million acres—only a little over four percent of which are accessible by road. The rest is classified as backcountry, a vast wilderness that is home to thriving populations of large carnivores, thermal features in which the water can exceed four hundred degrees, raging snowmelt-fed rivers and rugged mountains. The park’s 251-mile road network can give inexperienced visitors the impression that Yellowstone is a tame place. Davis and the hundreds of park employees she manages are devoted to countering that dangerous illusion—and to coming to the rescue when things go wrong.

While she could be described as Yellowstone’s top cop, Davis oversees much more than police work. The programs under her direction include structural and wildland firefighting units, search and rescue teams, trail crews that clear 1,000 miles of backcountry trails each year, Yellowstone’s own 911 dispatch service, a jail and justice center, the stock corrals and the fee program. “It’s like running a major city,” Davis says of the management load she shoulders with the park’s superintendent, Cameron Sholly, and other members of the senior leadership team. “We have hotels, we have restaurants, we have stores.” And then there are the bears, the avalanches, the steep canyon drop-offs and the 2,000-pound bison bulls. “People come to national parks and they often think that they are the same as a city park,” Davis says, “so we have to make sure that we’re educating our visitors: this is not going to Central Park. There are things that can hurt you and even kill you here.”

For all the mortal seriousness of Davis’s responsibility, there are humorous moments that remind her of how little she and her fellow rangers can take for granted when it comes to visitors’ awareness. “I saw a gentleman walking up to take a picture of an elk that was bedded in some grass near my house. I said, ‘Hey, you’re way too close,’ and he’s like ‘Well, these are zoo animals, aren’t they?’” Davis told the man that the elk were entirely wild, that Yellowstone was the elks’ home and they only looked docile because they were used to people. “But if you get too close, it could end up very bad,” she told him. “He was completely surprised by that,” Davis says. As one would expect of a senior manager in a park with 800 employees and a $33 million budget, Davis rises early and spends much of her workday catching up on emails and attending meetings. Her favorite day of the week is what she calls Field Day Friday. “I try to put on my calendar at least a half day every Friday to go out into the field and try to do a ride-along with one of my staff,” she says, “make a couple traffic stops and talk with visitors, just to see what’s going on in the park, because there’s no better way to get to know your staff and what’s really going on than sitting in a car with somebody drinking a cup of coffee and talking with them.” 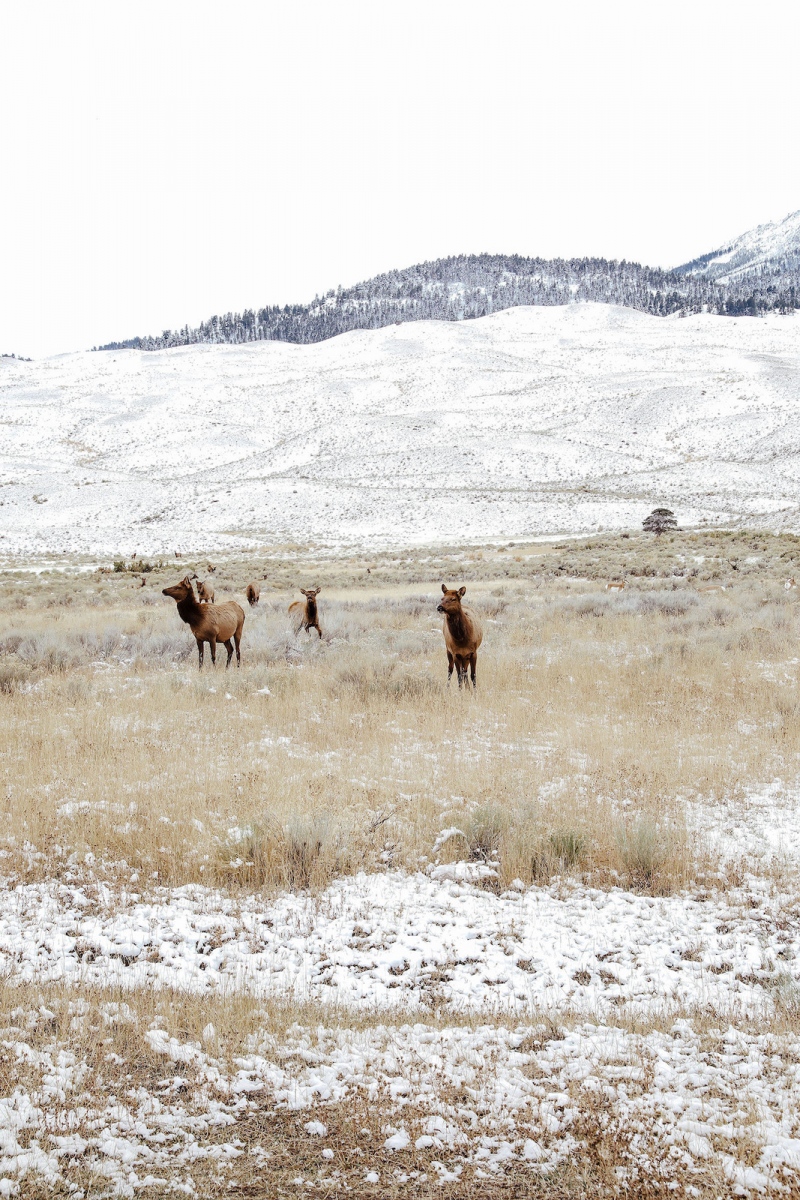 And COVID has brought new challenges to the role, but Davis is up for them. “Being outdoors is so important to both our physical and mental wellbeing,” says Davis. The sun, fresh air, and being with nature are therapeutic and enrich our lives. COVID-19 has shown how important it is to get outside and how important it is to protect open spaces. The NPS, since its inception, has worked to protect our open spaces, and now more than ever we are seeing the benefit of the work the NPS and its employees do. We know how hard COVID-19 has impacted everyone’s lives and want people to know that National Parks and other federal lands offer a place of refuge, where they can go to recharge and renew their souls.”

A year into her new role, Davis is still dazzled by the view of Mammoth Hot Springs steaming on the hill above her house. She is still pinching herself, though some days she longs for the simplicity of her early years as a seasonal ranger in North Carolina, cruising down the parkway in the evenings, watching the sun go down over the Blue Ridge Mountains, when Davis felt—for the first time—the satisfaction of doing her part to protect something beautiful for future generations.