When the Whisler Center was built as an infirmary 90 years ago, students were treated in observation rooms on the first floor. The second floor was set up as sleeping rooms for the nurses. The basement held all the mechanicals and a kitchen with a dumbwaiter. Students who were sick or injured came for treatment and stayed until they recovered. That was the model of care on college campuses at the time.

The physical structure of Denison’s sweet little architectural gem hasn’t changed much over the last century (the dumbwaiter still works), but the delivery and types of services offered have evolved far beyond Whisler’s original capacity. In fact, the building’s old quirks are what first led Laurel Kennedy, vice president for student development, to take a closer look at the limitations—and opportunities—the building presented.

“The building was set up so that when you walked in the front door, you hung a hard left if you had an appointment in the counseling center, or you’d go straight ahead and around a corner to go to the medical area,” she says. “They were completely separated.”

There wasn’t a model of care that really promoted overall health of mind and body, let alone spirit. “So if a student was coming in for acute gastritis, we could treat the stomach pains,” she says. “But what the student might have actually needed was some time with a counselor to talk about stress management.”

A hundred years ago, around the time Whisler was built, nurses at colleges nationwide were wrapping sprained ankles and giving students tinctures for stomach pains in college infirmaries. Then, in the 1940s, colleges expanded into counseling centers, mostly to help veterans, who were returning from World War II on the GI Bill, learn study skills and find careers. By the 1980s, college health centers were responding to rising depression rates, and students’ needs were shifting to include mental health support. Within the space of a few decades, the way students access and use college health centers has changed again, and radically.

Today, like their peers at universities across the country, Denison students are acutely aware of the physical and mental health services colleges provide. The good news is that they are more likely to seek help for issues like anxiety and stress. They are getting more support and at an earlier age, during elementary and high school, for issues like attention deficit hyperactivity disorder (ADHD) and learning disabilities. And counselors and medical staff on college campuses have become far better at identifying and treating issues such as asthma, eating disorders, and mental health diagnoses. “An integrative model is rather unusual for college counseling,” says Sanda Gibson, Whisler staff counselor. “Other counseling centers seem to be focused on wellness but not necessarily on integration. This facilitates a faster and more comprehensive delivery of services.”

“All colleges are seeing more students who are seeking care,” explains Amanda Lefeld, director of the Whisler Center for Student Wellness. “The stigma around mental health issues especially is starting to decrease, and people are more open to counseling or taking medications for anxiety or depression.”

Demand for counseling services has risen dramatically, with 29 percent of the student body at Denison meeting with counselors for at least one appointment. That number, in fact, represents a 150 percent increase since 2006-2007. And the cases are now far more complex.

“It’s more common for students to have multiple issues instead of just one now,” explains Lefeld. “Those students are typically seen more frequently. We have some students who have been utilizing counseling services since they were in their lower teens, so this is something that’s been routine for them. We have students who are lower income and have never utilized services. This may be their first chance to easily access care.” 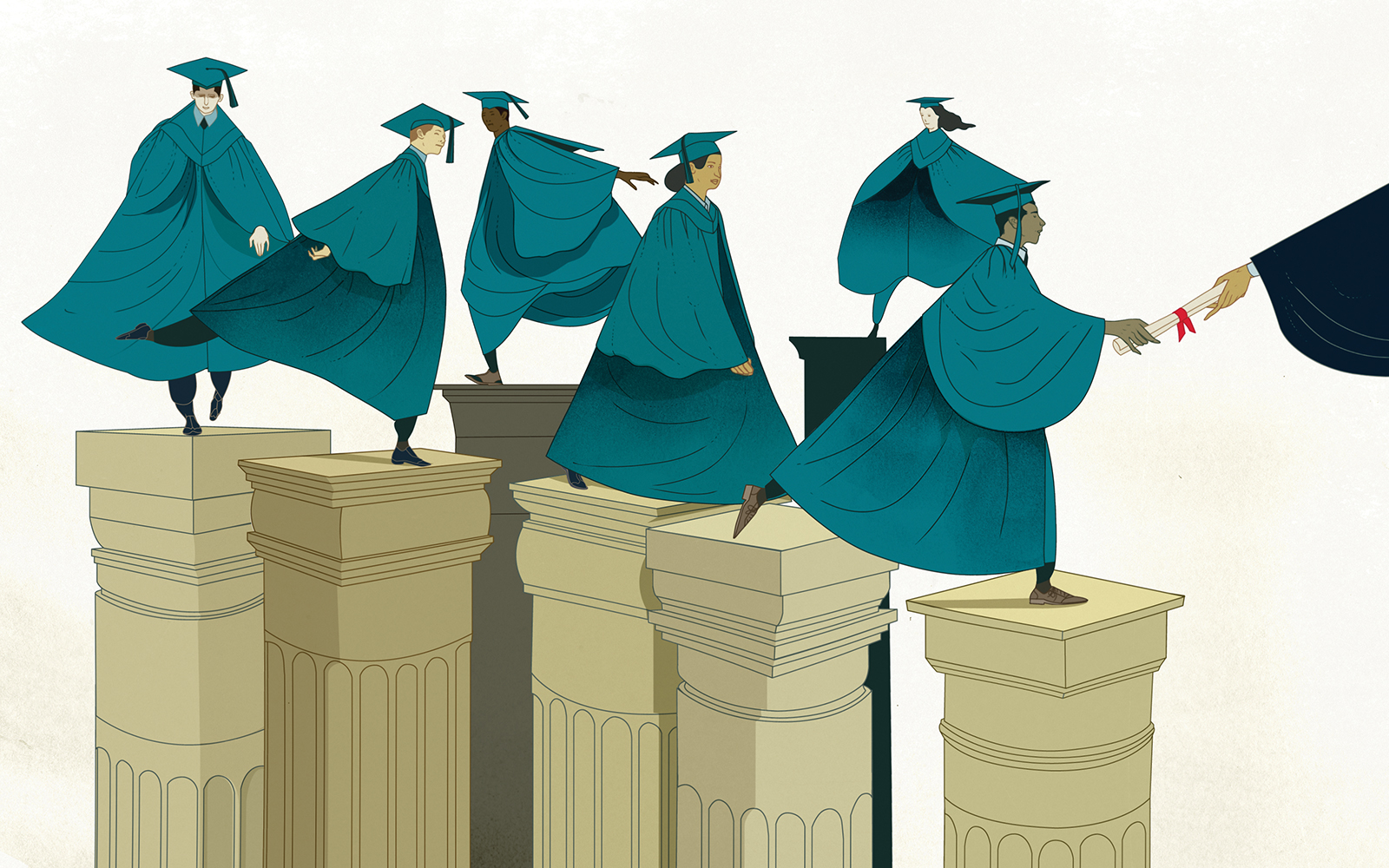 For many students, the path to wellness and mental health is through a counselor. For some, it’s being involved in sports or working out. And for others, their faith may be what anchors them.

While colleges and universities try to keep up with the demand for physical and mental health care, at the same time, they are recognizing the need to support an increasingly diverse student population with specific wellness needs, many of whom may be reluctant to seek help.

Like Denison, colleges nationwide have enjoyed an increase in the number of students of color and international students over the last 15 years. About one in five students entering Denison today is eligible to apply for a federal Pell Grant, indicating an increase in the percentage of students coming from very low-income backgrounds. In addition, data collected in 2015 suggests that 12 percent of Denison students identify as gay, lesbian, bisexual, or unsure.

According to the 2015 National College Health Assessment, students of color are more likely to have struggled with feeling hopeless or lonely, and to have intentionally harmed themselves or to have seriously considered suicide. LGBTQ students are more likely than their heterosexual peers to have felt hopeless, exhausted, overwhelmed, lonely, or to have considered or acted to harm themselves. There also are differences among students in their comfort level with seeking help from a mental health professional or accessing preventative services and resources.

“Since the diversity of our student population has increased, we’ve seen students who have financial hardships and, often, they haven’t been able to seek routine care prior to coming to Denison,” says Michelle Barcelona, interim assistant director of health services and nurse practitioner at the Whisler Center. “Our services are free, and many students often have a misconception that if they don’t purchase the additional student health insurance, they can’t use the services. We want to reach out to the student body to encourage preventative examinations and let them know we’re here so they will access the care.”

Medical staff and counselors at the Whisler Center also work with low-income students who might not otherwise have access to additional resources. Students who are on state-sponsored insurance plans, for instance, are not typically able to be seen outside of their county or state of residence. So if a student who receives state Medicaid assistance from Massachusetts needs a referral for lab testing off campus in Ohio, he’d have to come up with the money for the appointment on his own and might have to forgo further care. But Whisler staffers are now able to help students apply for grant funds from Red Thread, a program created in fall 2016 to provide financial support to Denison students for expenses like medical or dental care.

“We want all students to have access,” explains Gibson. “We get in front of them, and we want them to know that we are available. But you can imagine how scary it is for a student if it’s against her family values to walk into a counseling center. So there are definitely cultural barriers as well.”

To help students feel more comfortable in accessing resources, Denison has introduced “Let’s Talk,” a program that encourages students to stop by for casual but confidential conversations with counselors at various locations around campus, outside of the counseling center. Students who might be wondering what counseling is like or just want to talk about a friend or a specific problem can feel free to drop in from time to time.

“You know, a student from Korea is going to be less likely to come for an appointment than someone who was brought up in Cleveland,” Gibson says. “I talked to a student the other day for an hour. She just wanted to check it out. Her parents don’t believe in depression, or they just believe you ‘pull yourself up.’ She might not have come to the counseling center, but she came to talk while I was sitting in Slayter.”

We’ve been integrating health and counseling, bringing those two elements of care into concert with one another.

Given the challenges facing Denison and colleges nationally, it’s clear that supporting student wellness is a moving target. Today’s students might not respond to programs, resources, and initiatives that worked just five or 10 years ago. In adapting and evolving to support its changing student body, Denison recently expanded its model of care even further. With the integration of health and counseling fully under way, Kennedy and the Whisler Center staff began thinking about a more robust approach to wellness, which has ultimately led to a more holistic approach to students’ well-being.

“We’ve been integrating health and counseling, bringing those two elements of care into concert with one another,” Kennedy explains. “Now we’re moving in the direction of ‘integrative care,’ which really involves broad thinking about mind, body, and spirit and building it into the campus culture.”

Integrative care incorporates complementary therapies that support habits and skills that will hopefully stay with students for the rest of their lives, such as meditation, yoga, exercise, nutrition, sleep habits, mindfulness, and stress reduction. For instance, the Whisler Center already has created a more direct relationship with the Center for Religious & Spiritual Life and with athletics.

“When we talk about wellness, we’re really talking about well-being. And when we talk about well-being, we’re talking about five different domains of students’ lives,” says Kennedy. These domains, which were surfaced through a global study by the Gallup Organization, focus on five intersecting elements that contribute to a life well lived: intellectual, social, personal, community, and financial health. They provide the framework for students’ ability to thrive in college and life, and they inform the Whisler Center’s philosophy.

“Our students are very busy and engaged,” Kennedy says. “They are in lots of organizations. They have jobs on campus. They are moving all the time. So we’re really trying to encourage students to reflect on what they’re doing and what matters to them so they can begin to make priorities, to just take a minute in their day to focus on the things they care most about. That’s something our larger culture has not supported.”

The hope is to help students develop a range of good life habits that will help them stay healthy while they’re on campus and prepare them to thrive in the real world. This year, seniors who are living in apartments for the first time can take cooking lessons, be trained in kitchen safety, and learn nutrition practices with Bon Appetit, Denison’s on-campus food service company.

“We realize that there has to be some balance in the pillars,” says Lefeld. “For many students, their path to wellness and mental health is through a counselor. For some, it’s being involved in sports or working out. And for others, their faith may be what anchors them. Either way, there’s still that need for something to help bring inner peace to life.”

“Our students are really attuned to wellness; they want it,” says Kennedy. “Part of helping students flourish while they’re in college is helping them develop skills that will be useful to them their whole lives. Yeah, we want them to get their degree, but we’re interested in the whole person.”