It’s three days before graduation, and Baek Du Kim ’16 is getting ready to move to San Francisco. He’s set to go, has everything packed, except for one thing—a set of golf clubs. Kim doesn’t play golf. Someone who had gotten a new set gave them to him, and they’ve been languishing in storage ever since. A set of golf clubs is a boon to someone who has the time to play and is staying in one place. But for a guy who moves around a lot, not so much.

Kim’s whole life has been about movement, journeys, displacement. It’s not that he doesn’t have roots; it’s just that he transplants them often. As a child of a single mother, he changed schools frequently. At fifteen he became an exchange student. And in college, after three years of study, he had to return to his native South Korea for the country’s required military service.

It was the first time since high school that he had really lived there.

“I’d been living in the United States since I was 15,” he says. “So when I went to the military, it had been eight years. It was hard to readjust.”

Kim has a serious demeanor. He’s wearing shorts and a T-shirt, but everything is pressed and sharp. He doesn’t smile often, but he can. He says his “mean resting face” has made people take him seriously and think he’s a leader.

And then, as if on cue, two students walk by and greet him respectfully, as they might a parent or a professor, someone who has seen much more of the world than they have.

“I don’t want to be wasteful,” he says, returning to the issue of the golf clubs. “They’re really nice clubs.”

Kim was born to Cheon Guen Kim and Min Sung Kim in 1990 in Seoul, South Korea. His parents met as political activists in the 1980s. They were both leaders in the 1987 June Uprising, a fact that seriously affected their careers. His father, Min Sung, lost his job and was jailed, and his mother was dismissed from the university and was on the run for a few months.

“My parents separated when I was 4 or 5, and I went with my mother. I don’t remember what happened or why. In South Korea at that time, raising a kid as a single mother, you’d get a lot of eyes from people.” It was hard for her to find work, and when she did have work, Kim was by himself after school. The two of them also moved often. Kim remembers attending three different elementary schools. He had to learn to adjust quickly to new environments and new people.

When he was 15, he left Korea for Ionia, Mich., about 30 minutes east of Grand Rapids, to be an exchange student. For many Koreans, he says, the United States is “a dreaming place. But when I first came I couldn’t speak English at all and so going to school was a shock.” He cried every night for the first month—it was the first time he’d been away from his mother. Kim began studying in earnest, an act of survival, he says. He had an electronic dictionary with a record function and would record his entire school day—all eight hours. When he got home he would listen closely, replaying his entire day.

Soon he began to revel in the relative freedom of the American education system. When he was a child, his mother had never forced him to study. Instead she encouraged him to practice the piano, to play soccer, to enjoy school. This was unusual for people in his social cohort, many of whom went to school all day and to private tutoring centers at night. The end goal was to get into one of the best universities.

His mother was a teacher and could see the effects this system was having on her students—the stress and exhaustion. She wanted him to go to the United States, and exchange programs were the least expensive option.

After four months in the U.S., it was hard for Kim to imagine returning to a Korean education system that he describes as “fixed and structured and highly competitive.”

He decided to stay in the U.S. and was accepted to Donovan Catholic in Toms River, New Jersey, a school that he says was much more competitive than his school in Michigan. In some ways, he was living as intensely as he would have been had he stayed in Korea. His goal was to get into a school with a strong international reputation—a quality that really matters in South Korea—but when the recession hit in 2008, he knew that he would not be able to afford to attend the kind of school he had in mind. A guidance counselor told him about American liberal arts colleges, and a college in Ohio offered him a scholarship.

When Kim came to Denison, he was in a very serious frame of mind and was still feeling the pressure from high school. He wanted to do everything and anything all at once—serving in student government and as an R.A., working and studying.

“When I first came here, quite honestly, I was very arrogant. I thought I was better than everyone else. But much of that arrogance was coming from the anger of not really fitting in when I was in high school. So I wanted to show people, to get recognition. I wanted to make an impact.”

Looking back, he realizes that he tried too hard to do too much. Kim remembers a light turned on and then confusion. It was six o’clock in the morning and a man was standing over him and yelling.

“I had not woken up at 6 a.m. in ages, but on my first day of boot camp, I had to. That was the culture of boot camp—to keep you nervous so that when you’re training you stay calm and don’t get hurt.”

He always knew he’d have to return to Korea for military service—it’s an obligation, and few men can get out of it. Kim didn’t want to get out of it. But it was such a strange world.

“In the military a lot of illogical things happen. Think about it. You’re living with 80 guys every day for months!”

He was out of place again, but this time it was because of timing. Most Koreans do their military service after one year of college. He was older, so people looked up to him. He was also better educated, had been in the United States, and was accustomed to being in charge. He had already held leadership positions in college, had learned to voice his opinions, and had learned to speak up for himself and others. “And I have the military look. I have sort of a cold and mean face when I don’t smile. And this face, believe it or not, is highly valued in the military.”

He was appointed squad leader and trained in mine deactivation along Korea’s demilitarized zone, or DMZ, dangerous work because not all mines are detectable. He was nervous about having to do this work, but after boot camp his battalion leader saw his résumé and encouraged him to teach English to the entire battalion as part of his responsibilities. He never saw a mine. But he saw their effects.

“I was in an engineering battalion, and one of the things I trained to do was to become a construction supervisor. My job was to oversee construction of roads around the DMZ area. Not a lot of people have access to the area.” Given the hostility between the two countries, the DMZ, known for landmines, is considered a dangerous spot to be.

He may have been, as he says, “arrogant and cocky” when he first went to college, but his life experiences changed him.

Being in the military and being at Denison, he says, “made me realize that I’m not better than everyone else. I learned that the type of person, the ideal person I wanted to be, is not the ideal person that everyone wants to be. That took a long time for me to understand because that ideal person was coming from the Korean norm. I had a hard time letting that go from my life.” 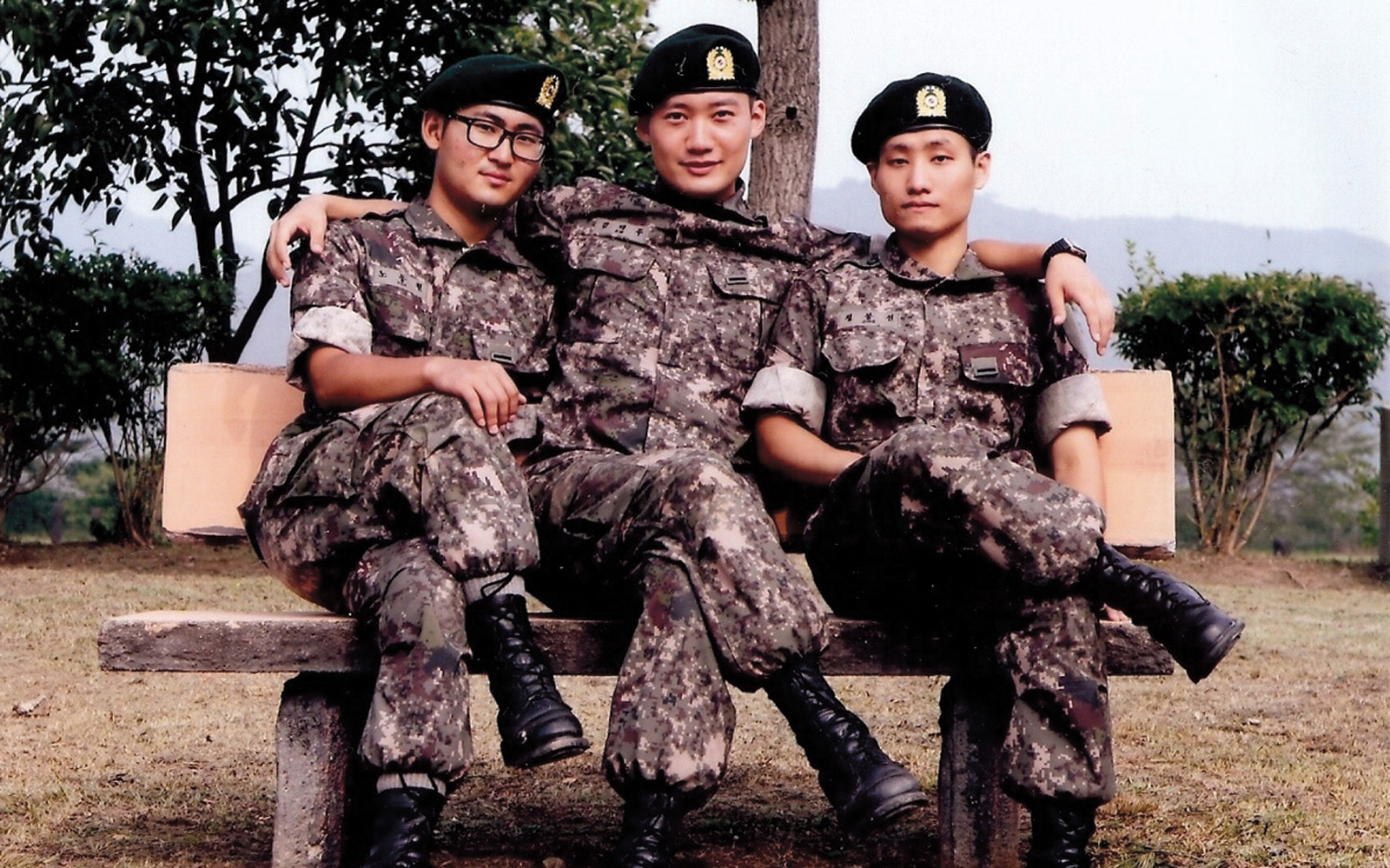 Kim thinks a lot about reunification of North and South Korea.

He thinks that reunification will happen in his lifetime—for economic reasons rather than political ones.

Kim has been able to cross both physical and mental borders, to weigh differences and make connections. The liberal arts, he says, taught him to find connections where people wouldn’t normally look for them. He values his friends who study, for instance, biochemistry and studio art, or people who are active in student organizations or volunteering and still study and cultivate their intellects.

He’s a part of a new generation of South Koreans, people who see themselves as South Koreans and something else. “I’m South Korean. I realized that in the military. I belong there. But my mindset is very Americanized.”

In particular, he points to ideas about the individual versus the community. In South Korea, the community always comes first. This, he thinks, is because Korea has been shaped by Confucianism. For example, he says, you always yield to your elders. And yet he values the American respect for the individual, and the idea that different passions require different paths.

He dreams of starting a company that would employ like-minded Koreans, people who didn’t go to the top Korean universities, but who have a global outlook—maybe those who have mixed feelings about both the United States and Korea, like himself.

But right now Kim is prepping for his move to San Francisco, where he’ll look for work in IT. If he doesn’t find something, he’ll return to Korea. He says he’s on the cusp of a future, though he lacks a clear sense of what that means or looks like. He’s confident, though, “and that counts for a lot.” Kim is a mountain.

He’s also just a 20-something about to graduate, about to go off into the world. Tonight he’s going to a dinner with a group of international students. He’s going to ask them if they’re interested in a set of golf clubs. He doesn’t really play golf, he says again.

Then he asks me, a half smile on his face, “You sure you don’t want some golf clubs? They’re really nice.”

Jack Shuler, associate professor of English, has written extensively on race relations in America, the death penalty, and issues facing prisoners. His work has appeared in The Atlantic, Salon, and Christian Science Monitor, among other publications.